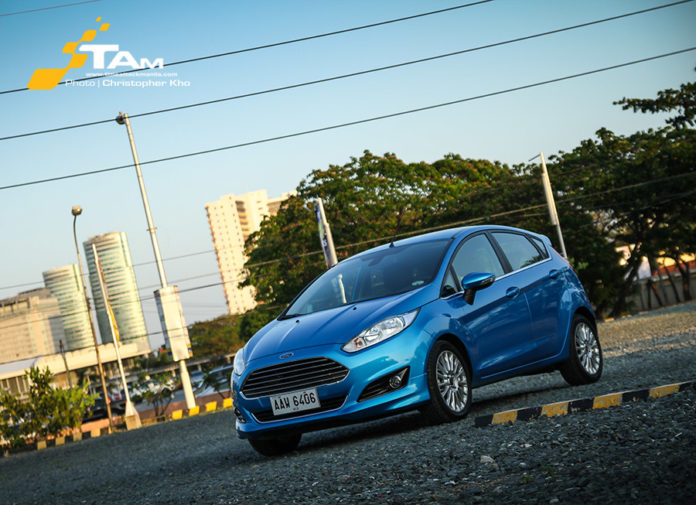 Under that hood is a 3-cylinder displacing ‘only’ 999cc. But can the Fiesta EcoBoost prove that a turbo charger is in fact the ‘replacement for displacement’? Luckily, Ford Philippines graciously lent us this pocket rocket for a weekend with a full tank.

With the mean streets of Metro Manila as our playground, I was on a mission to find out.

The 2014 redesign of the Fiesta looks great and isn’t cutesy-looking like most cars in the subcompact class. The shrunken ‘Aston Martin’ face and flowing lines of the body hint at subtle aggression. The spoiler on the rear hatch gives it a sporty-ish vibe and the 16-inch multi-spoke wheels resemble a set of Volk Racing Artisan Spirit wheels if you squint hard enough. 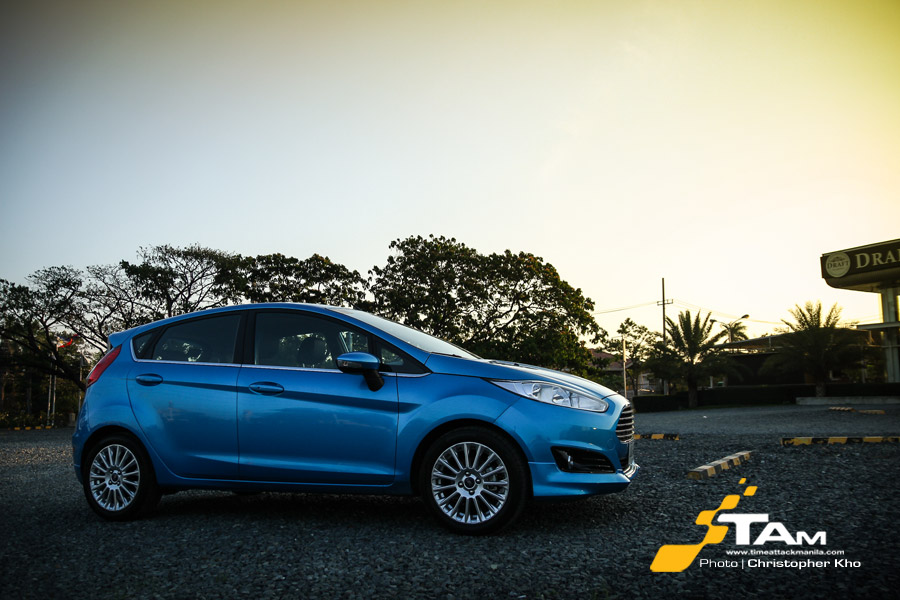 As for the interior, the deeply bolstered leatherette seats with fabric inserts are comfortable and supportive even after a few hours behind the wheel. It’ll also easily fit 5 people comfortably and a decent amount of cargo with the seats folded. The gauges are quite attractive and easy to read. Although it did take me a while to figure out the radio with SYNC connectivity.

The plastic steering wheel with fake ‘stitching’, however, was a bit of a letdown. This is the part of the car you touch the most and Ford could have used some better material.

But what I really wanted to know if it drives as well as it looks. 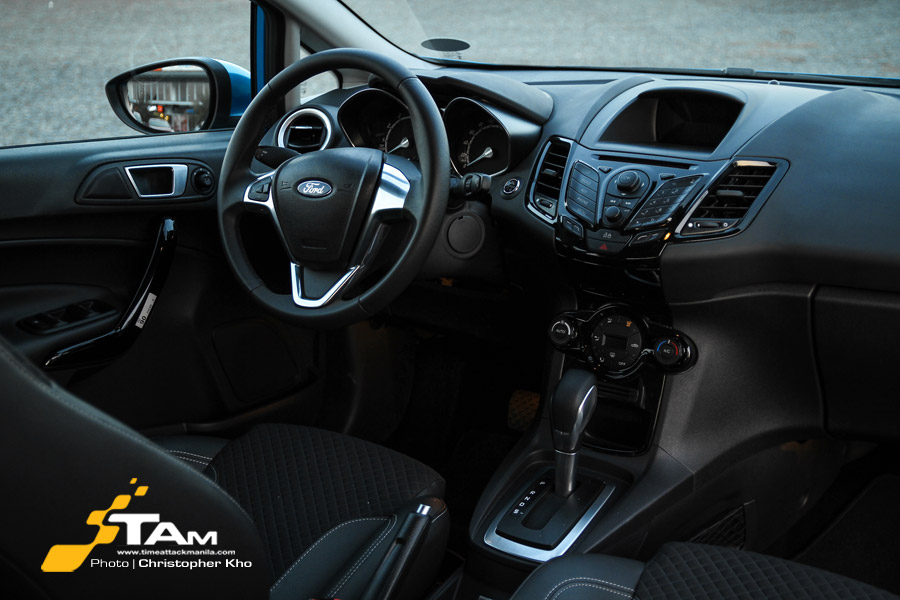 Its EcoBoost engine and the 6-speed PowerShift transmission are a tag-team combo that puts the Fiesta EcoBoost in a league of its own. This little powerplant makes 125 hp and a whopping 170 Nm of torque from as early as 1,400 rpm. Add to that a dual-clutch transmission that not only changes gears faster than any human could, but is also more efficient than a conventional torque converter.

PowerShift transmissions, however, are not that smooth at low speeds. Still, it’s not bad considering its advantages.

On power, the 1.0L 3-cylinder EcoBoost definitely drives like a much bigger engine. Although the turbo needs a few seconds to spool up, it really starts to go once it hits the torque band. There’s a sweet spot between 4,500 and 6,500 rpm and the gear ratios of the transmission are perfect for keeping it there. 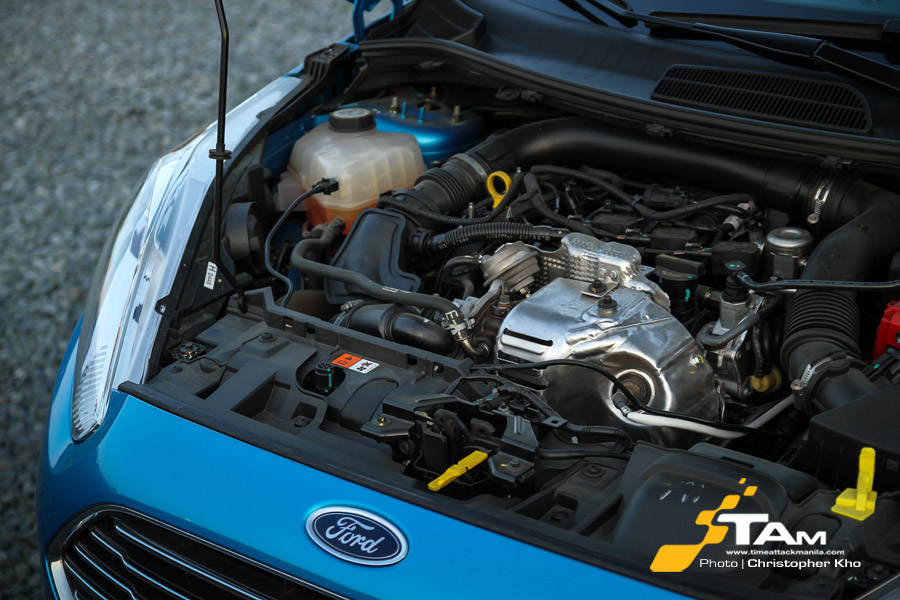 Sadly, Sport mode, with +/- buttons on the side of the shifter is slow to respond and not very intuitive. Ford claims it has a top speed of 200 km/h which I have no doubt it can do.

In 6th gear, it’ll cruise at 100 km/h with the engine turning at only 2,000 rpm. Fuel economy, as we found out, is also quite okay. Ford claims 26 km/l, but we measured 11 km/l in a combined cycle and that’s not bad. The small displacement means it only sips gas when crawling through traffic. But like any turbo engine, it’s quite thirsty on a lead foot… as low as 6 km/l if you drive it as fast as we did.

As for the suspension, the Fiesta EcoBoost is quite firm and sporty. There was enough stroke to soak up the worst of road conditions without bottoming out. The brakes didn’t have the strong initial bite and over-assisted feel most Japanese cars have, but they are powerful and direct. 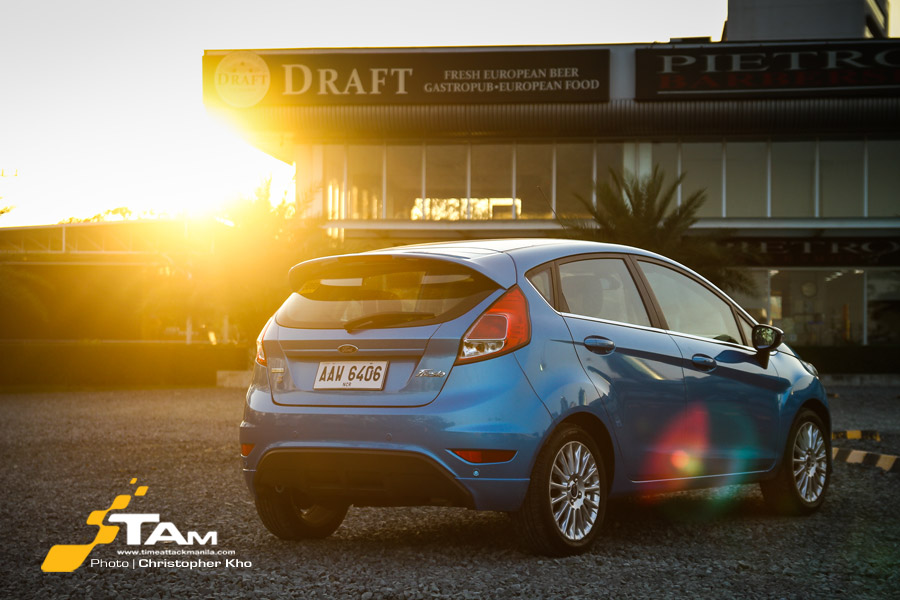 At P898,000, the Ford Fiesta EcoBoost is definitely on the higher end of the subcompact car price race. However, the EcoBoost and PowerShift combo puts it in a totally different class in terms of performance, making it the only pocket rocket in its price range.

Even with its small 1.0L 3-cylinder engine, a feisty turbo makes it as powerful as cars with larger engine displacements. But none will be as fuel efficient or as fun as the Fiesta EcoBoost. 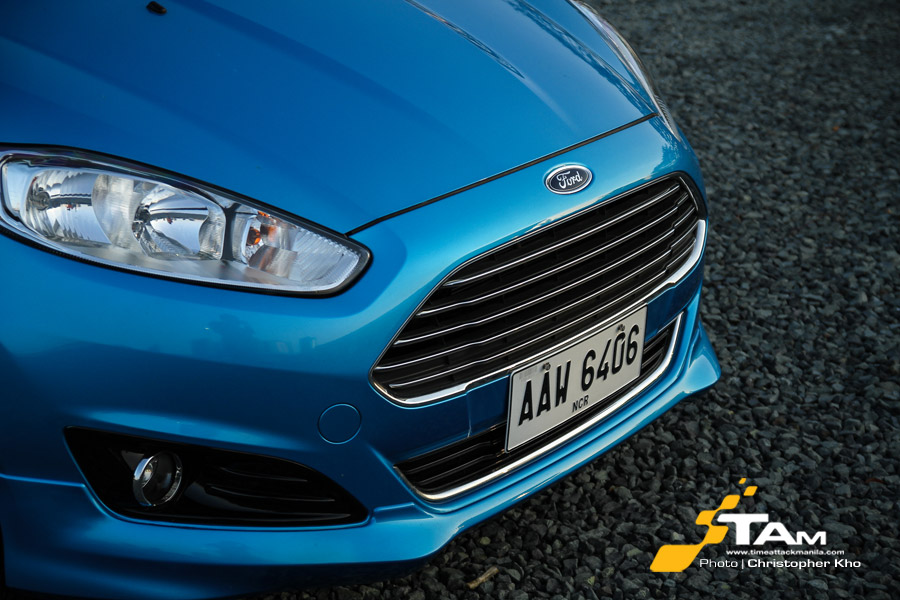 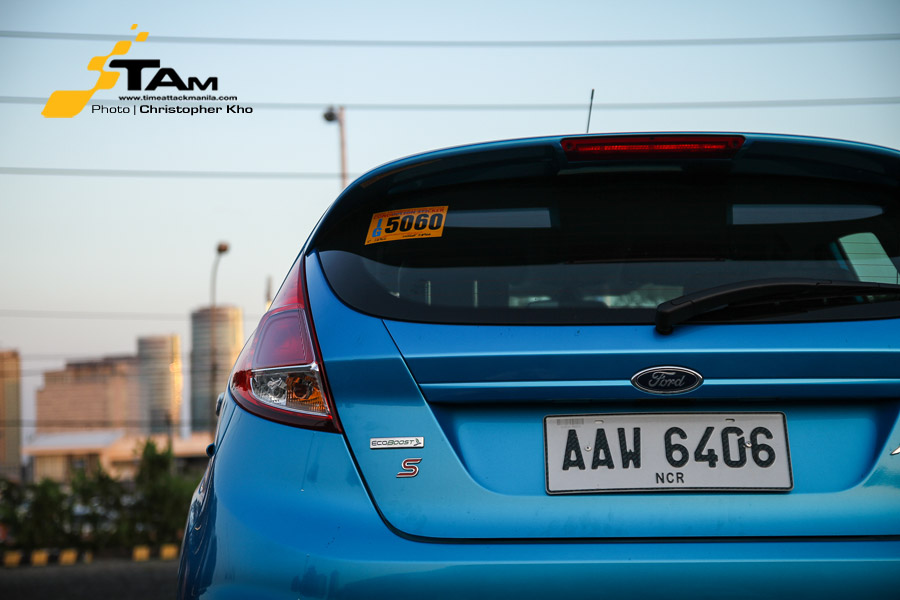 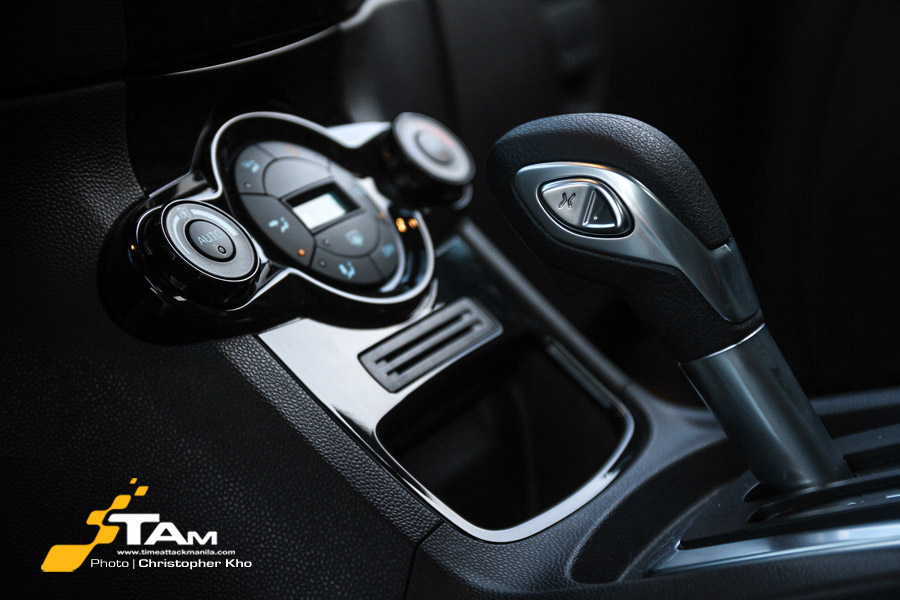 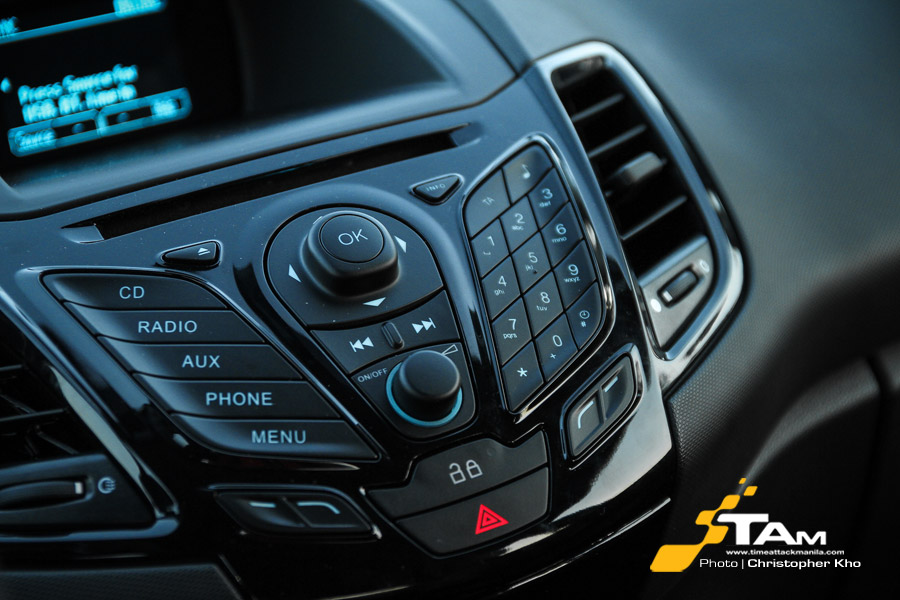