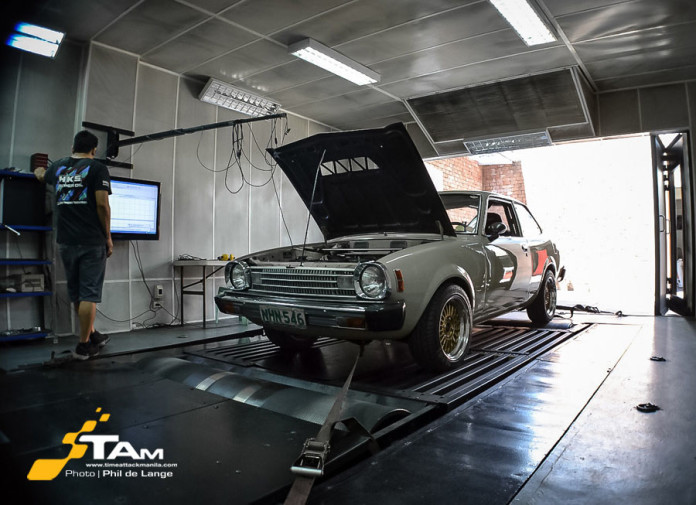 A dynamometer, or ‘dyno’, is simply a device that measures an engine’s power output. But there’s much more to it than that. So, I took my own 1979 Mitsubishi Lancer for a dyno run in Staging Lanes, Las Piñas to see what it can do. 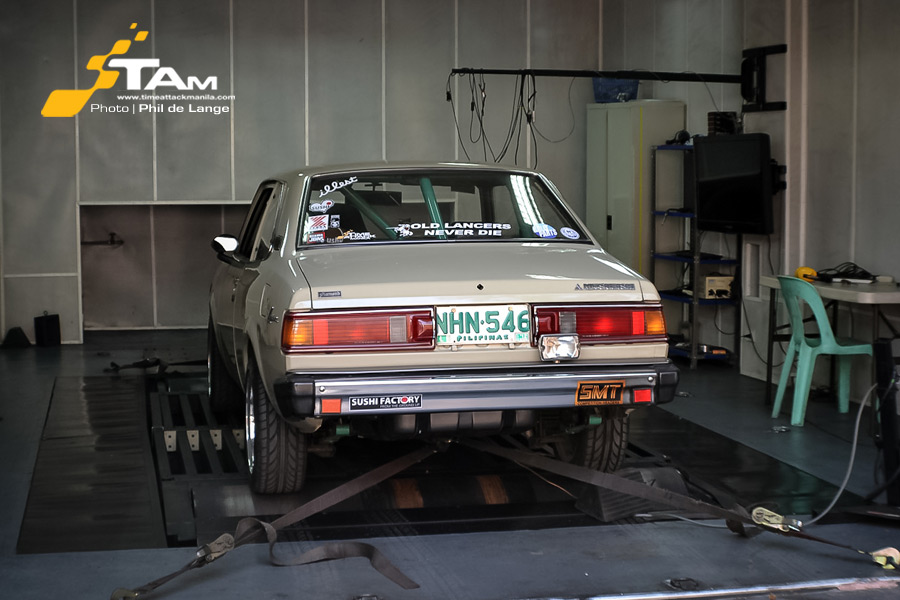 Which is which?
There are 2 basic types of dynos: an Engine Dyno that measures power output from the crank and a Chassis Dyno that measures from the wheels. Although car manufacturers quote performance figures at the crank, it requires the entire power unit to be removed, which is impractical for regular folks like us.

That’s why we rely on a chassis dyno, because it takes into account the engine’s exact setup as installed and drive train efficiency. Factors such as the drive layout, gear ratio, and even tire size will have an effect on the final output as measured at the wheels, hence the term Wheel Horse Power (WHP). For tuning purposes, this gives more relevant figures than crank horsepower. Plus, it’s so much easier to do.

There are a number of shops that offer this service in the Philippines, one of which is Staging Lanes in Las Piñas that’s run by Why Why Dagondon and Vanni Garcia. So, I gave them a ring and set an appointment. 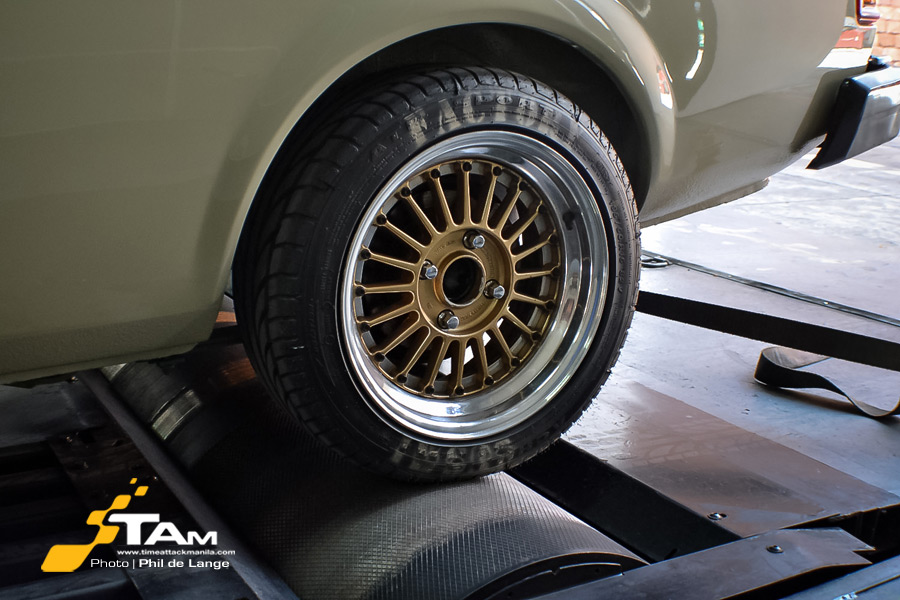 On the Run
When I showed up at the shop, I was directed to THE Vanni Garcia of Vannitec Racing who would do the actual dyno test. They then strapped down my beloved Lancer onto the machine and hooked it up. The sensor attached to the high tension wire of the No. 1 spark plug gauged rpm, while a probe went into the exhaust measured air/fuel ratio.

I personally built the engine and tuned it give peak power at 6,000 rpm, so I figured we’d run it until it hit the rev limiter at 6,500 rpm just to see if there’s power past the theoretical peak. But what surprised me was, when ran in 3rd gear at 6,500 rpm, my car was going over 100 km/h indoors on rollers!

2 more runs were done to confirm the data, although we let off after 6,000 rpm since there was no point going past that. 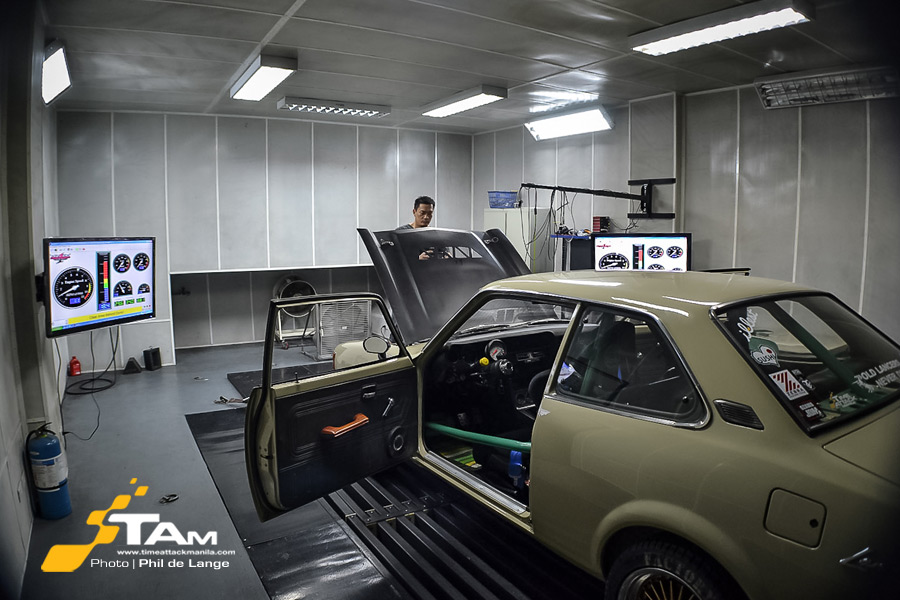 Punching Numbers
This was the very first time I had the car on the dyno since building the engine in it. And looking at the graphs and figures, we now know where the engine makes peak power and torque. What this tells us is where the ideal shift points are and where to set the rev limit. Some would-be ‘tuners’ try to wring the most rpms they can out of an engine. While it’s possible to rev my engine to 8,000, there’s no point in doing so because power drops off past 5,800 rpm.

Looking at the air/fuel ratio, we also now know how much margin we have left to tune the engine. The current setup was still very much in the ‘safe zone’ with 14.7:1 being the stoichiometric ratio. 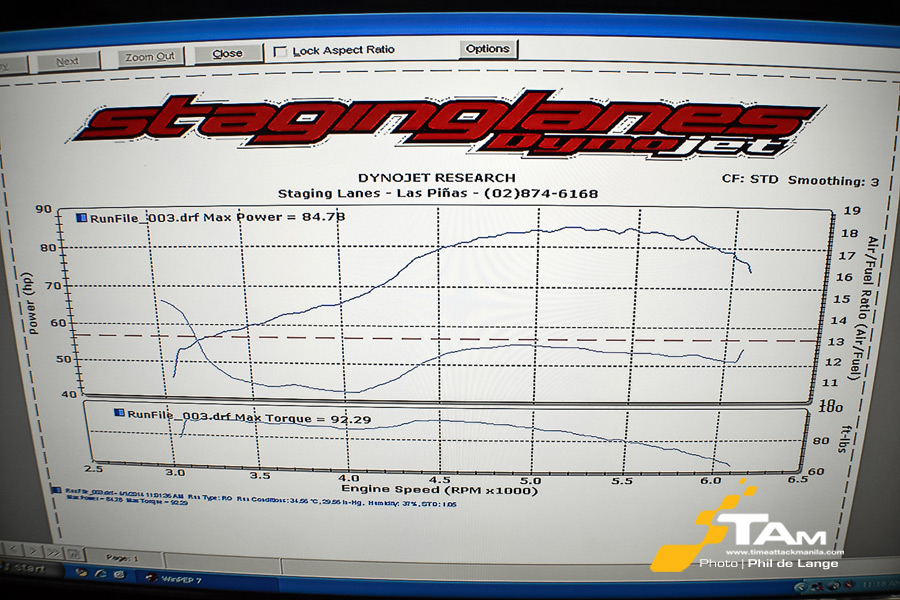 On the Rolling Road
Staging Lanes charges P2,500 for a baseline run like this, or P5,000 per hour for those who can tune on the fly. The data you can gather is invaluable and makes it worth every Peso, plus it’ll give you a chance to take an awesome video of your car running on the dyno.

Aside from knowing exactly how much power all your mods has bought you, you’ll also be able to figure out exactly where the shift points are. Most importantly, a dyno run will verify whether your engine is running within a safe air/fuel ratio range.

Parts have now been ordered so that I can re-tune the engine and we’ll be back for another round with the dyno soon.