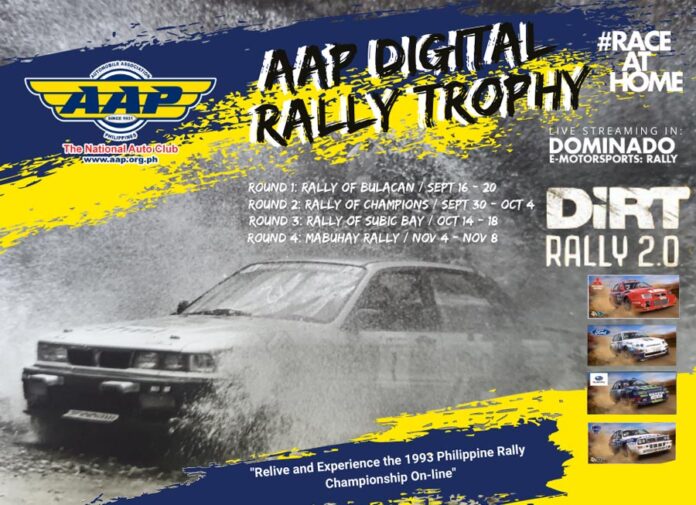 Given the government’s current limitation on sporting activities, we highly doubt if there’s going to be any motorsport events happening this year. Like most organizations, this has compelled the Automobile Association Philippines (AAP) to turn to sim racing with their own virtual competition they call the ‘AAP Digital Rally Trophy’.

As the name suggests, the series will be a race against the clock on special stages. It’s going to be a 4-leg championship run using DIRT Rally 2.0, which means competitors on either the PlayStation 4 or PC are able to join.

The very first AAP Digital Rally Trophy will be a throwback to Philippine Rally of 1993 – revered as one of the last great years of its history. Each leg will consist of stages reminiscent to the actual locations run during the ’93 season, including the Group A rally cars that were run here in the Philippines that year.

Competitors are given several days prior to each round to set their stage times in order to qualify for the live event. It will then be streamed live in cooperation with Dominado E-Motorsport. They’ll also show highlights of the ’93 rally season during the stream to highlight the legends of that era.

“We can’t wait to get back to real motorsports. But we are taking this opportunity to not only conduct racing despite government restrictions, but also looking back at one of Philippine rally history’s iconic years,” said Ivan Isada, AAP Motorsport Manager. “Perhaps this will bring the rally discipline back into the consciousness of our motorsport community. It’s a thrilling motorsport with potential for growth notably in the Vis-Min region.”