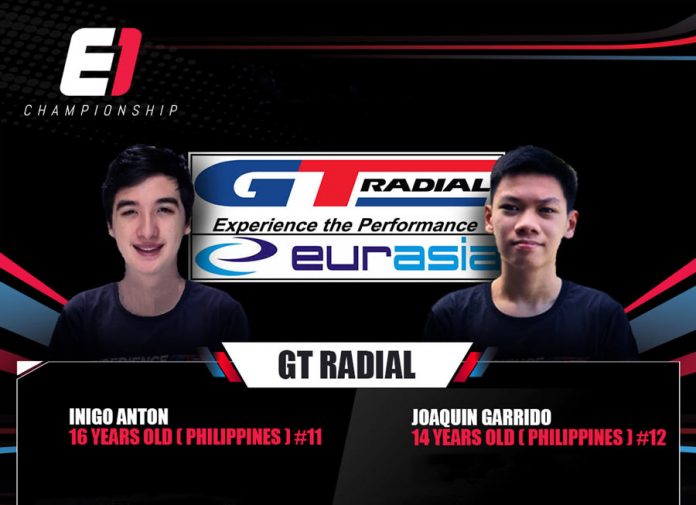 Eurasia Motorsport may be new to eSports, but they certainly had no problems taking their knowhow from the real-world into sim racing and deliver results in the inaugural E1 Championship. Together with GT Radial Philippines and an all-Filipino driver lineup, they were able to score several podium finishes and wrap up the 8-round season in a respectable 5th overall.

Iñigo Anton and Joaquin “Wakkeen” Garrido headlined GT Radial-Eurasia Motorsport’s entry as part of a strong 22-car field. Although everyone raced in identical Formula RaceRoom X-17s, packing 900 hp and weighing only 620 kg, they were up against some of the best sim racers in Asia.

Things got off to a strong start back in November where Iñigo managed to take home 2nd and 4th during the curtain raiser at the Sepang International Circuit. It was a learning experience, however, for Wakkeen who ended up in 10th and 14th. In stark contrast, luck was not on their side during Round 2 at the Shanghai International Circuit. On-track incidents robbed Iñigo of potential podium finishes. Wakkeen also lost out on a possible top 10 spot after contact with a competitor. Still both drivers did well to score points towards the championship.

The season resumed in December with a visit to the Dubai Autodrome. Again their efforts would go unrewarded with contact during the Sprint Race dropping Iñigo outside the podium, while a last lap puncture in the Main Race cost him 2nd. Wakkeen again helped the team haul points with his 11th and 9th place finishes. It was a similar story during Round 4 at the Imola Circuit. Iñigo worked hard to get 6th in the Sprint Race, but was pushed into a spin during the Main Race and rejoined in 11th. Wakkeen, on the other hand, did well to secure a pair of Top 10 finishes despite struggling with a faulty brake pedal.

GT Radial-Eurasia Motorsport’s fortunes improved when the E1 Championship went to Spa-Francorchamps before the Christmas break. Iñigo was rewarded with 3rd and a 6th, while Wakkeen had a solid 9th and 13th. The following event at the Silverstone Circuit yielded no podiums for the team, but 8th and 7th places for Iñigo and 9th for Wakkeen allowed them to maintain 5th in the overall standings.

The penultimate round at Road America gave the team their best result all season. Iñigo bagged a well-deserved 2nd followed by a 5th place finish. Wakkeen also finished in a respectable 13th following a significant contact at the start. GT Radial-Eurasia Motorsport ended the season on a high later that month at the iconic Mount Panorama Circuit in Bathurst. Iñigo and Wakkeen were 8th and 11th, respectively during the Sprint Race and saved the best for the very last race of the championship. Starting from the second row , Iñigo put pressure on the front runners right from the very start. He held onto the lead at one point in race, eventually taking the chequered flag in 3rd after 30 minutes of racing. Wakkeen enjoyed another impressive run to finish 9th.

With the combined efforts of 16-year-old Iñigo Anton and 14-year-old Joaquin Garrido, GT Radial-Eurasia Motorsport wrapped up the inaugural E1 Championship 5th overall with 299 points collected over 8 rounds of sim competition. Meanwhile, Iñigo’s tally of 4 podiums and 8 top-10 finishes puts him 4th in the Driver’s Standings.

One of the team’s goals in entering the series was to provide Filipino drivers Iñigo and Wakkeen the opportunity to work closely with a real-world race team and learn the importance of the collaboration between driver and the data engineer. Both young racers certainly achieved this, whilst maximizing their opportunities throughout the championship.