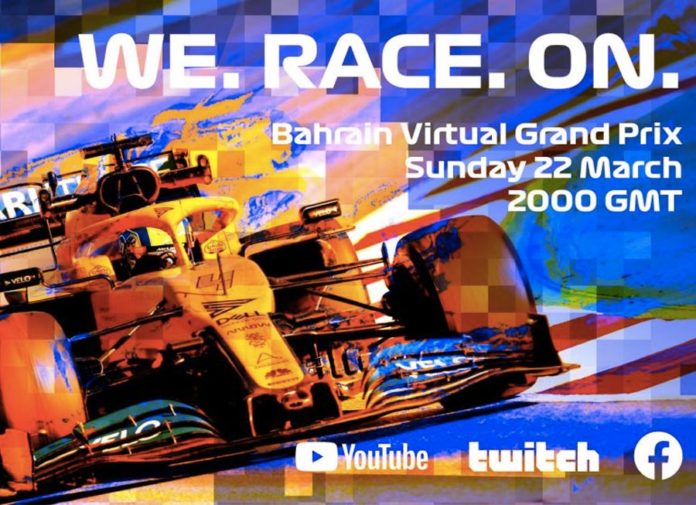 It seems that the 2020 Formula 1 World Championship is pushing through after all. Well, something like it. After the first 7 races had to be postponed (or cancelled) due to the COVID-19 pandemic, Formula 1 has now turned to Sim Racing. Their plan is to ‘replace’ lost race weekends with their own ‘F1 eSports Virtual Grand Prix Series’, starting with a ‘Virtual Bahrain Grand Prix’ this weekend.

Formula 1’s very first online event will take place on the 22nd of March, which happens to be the same date when the ‘real’ Bahrain GP was supposed to take place. It’ll still be run on the Bahrain International Circuit, except virtually on the official F1® 2019 game, and at only 50% race distance.

Subsequent virtual races are then scheduled in place of every postponed Grand Prix. That’s the Vietnam GP, Shanghai GP, Dutch GP, Spanish GP, and Monaco GP or at least until it’s safe enough to resume the 2020 season. However, bear in mind that all this is just for kicks (and bragging rights) to keep us all entertained and will have no bearing on World Championship points.

While it was mentioned that the race will feature ‘a number of current F1 drivers’, they didn’t say exactly which ones or how many are competing in Bahrain. The other grid slots, on the other hand, will be filled by ‘a host of starts’ that’s yet to be confirmed.

We’ll finally have something to watch as the ‘Virtual Bahrain Grand Prix’ will be streamed live (on YouTube, Twitch, and Facebook). So come this Sunday, be sure to go online because at 8:00 PM GMT (or 4:00 AM local time) it’s lights out and away we go.