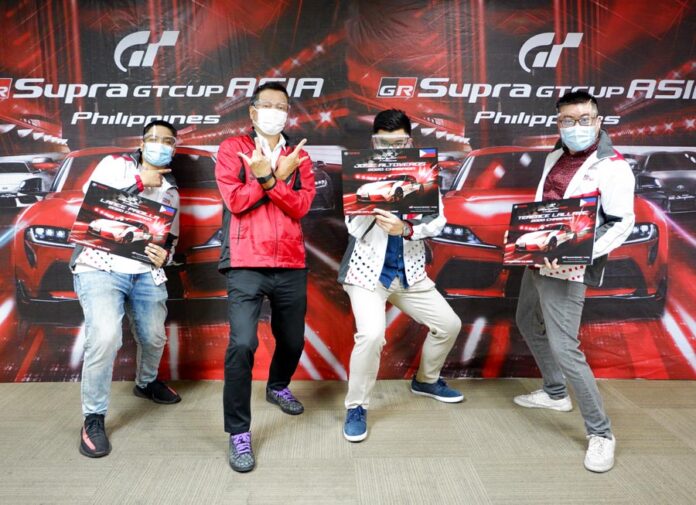 Remember the names Terrence Lallave, Lance Padilla, and Jose Altoveros. These fine gentlemen will represent the country at the regional round of GR Supra GT Cup Asia this October as they’ve earned their slot by winning the Philippine event in their respective classes.

The ‘GR Supra GT Cup Asia – Philippines’ was Toyota Motor Philippines’ (TMP) way of keeping their motorsports program alive after it was made known that the Vios Racing Festival will be shelved for 2020. Their one-make-series would run over the course of 3 race weekends, on iconic circuits in Japan, featuring the GR Supra of course, and all hosted on GT Sport on the PlayStation 4.

More than 60 drivers nationwide signed up for the online competition (plus some media and celebrities) in hopes of becoming the country’s top sim racer, but only 3 were selected for the regional event.

SPORTING CLASS
Reserved for the pros, the Sporting Class grid was a mix of seasoned sim racers and real-world racing drivers. A total of 19 competitors vied for the top prize, but in reality it was only a 2 horse race between Terence Lallave and Luis Moreno. Both seasoned sim racers, they were consistently at the front of the pack at every outing. Moreno would pull out a slight edge by season’s halfway point after 4 successive race victories and looked to be on course to take the championship. But a 10th place finish at the all-important season finale wiped out all his title hopes.

Lallave went on to win that race at Fuji Speedway, allowing him to edge out in the overall standings by 4 points and collect the Sporting Class championship in the process. A disgruntled Moreno had to settle for 2nd, while Miguel San Mateo was 3rd.

PROMOTIONAL CLASS
With 31 entries in total, the Promotional Class was the most hotly-contested category in the GR Supra GT Cup Asia – Philippines. The likes of JB Cruz and Michael Sicat all had their shining moments, but were unable to match the pace of Lance Padilla, Lance Guballa, and Gab Señeres.

The trio were inseparable, with each driver finishing not lower than 5th at every race. Although Guballa did win the final race of the season, he missed the title by mere 5 points to Lance Padilla who was crowned as the Promotional Class champion. Señeres, on the other hand, fought hard to end the series in the Top 3 position overall.

JUNIOR CLASS
Although these youngsters were ineligible for the regionals, that didn’t stop Russel Gabriel Cabrera and Iñigo Anton from having a go at each other in the Junior Class. Both drivers came from families with a motorsports pedigree, which gave them an edge even on the virtual race track.

Cabrera practically dominated the entire field and won the first 2 events with ease. Anton tried his best to play catch up, but was already too far behind in the points allowing Cabrera to secure the Junior Class title with an 8.5 point advantage. John Paul Veloso, on the other hand did well to win the final race at Fuji Speedway to conclude the season in 3rd overall.

MEDIA CLASS
Jose Altoveros is no stranger to TMP’s motorsport activities. Having won the Vios Racing Festival’s Autocross Challenge in 2019, he proved that he’s just as quick in the virtual world as he is on track.

He now joins Terence Lallave and Lance Padilla to represent the Philippines in the GR Supra GT Cup Asia, which will be streamed live on the 25th of October 2020 at the Toyota Motor Philippines page on Facebook.

“We are very thankful for the passion and enthusiasm that Filipino gamers and e-motorsports fans have shown during the course of our inaugural GR Supra GT Cup Asia Philippines,” said Sherwin Chualim, First Vice President for Vehicle Sales Operations of TMP.

“We expect our champions to do their best to represent us well in the Asian Regional Round. We will continuously support them, and hopefully, their success inspires a lot more Filipino racers to pursue this sport that we really can excel in. Because of the success of the first season, we will seriously consider staging another tournament in the future”