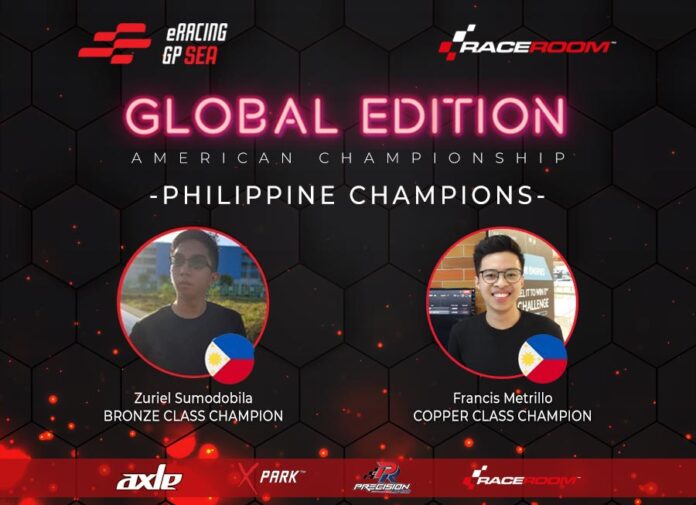 Our boys really hit the jackpot at the recently-concluded ERacing GP Southeast Asia (ERGP SEA) American Championship. Not only did we bag a pair of class titles, but also the teams’ trophy for Sim Racing Pilipinas, as well as the Nations Cup for the Philippines.

The 6-round series was yet another follow up to ERGP’s ultra-successful Global Edition franchise. On this occasion, they competed using a variety of single seaters while touring some of the most iconic circuits in America. Also new is introduction of a Team Championship and Nations Cup to somehow unify drivers who run under one outfit and generate support for those racing their nation’s flag. 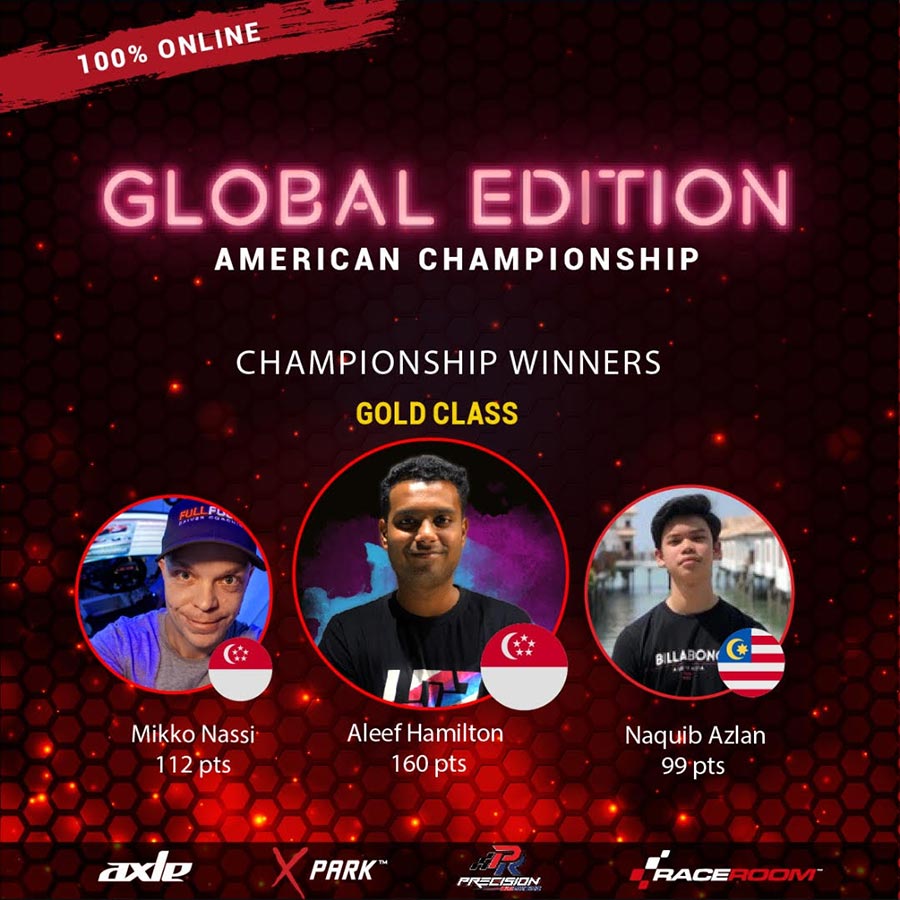 GOLD CLASS (INDYCARS)
Ar Muhammad Aleef Mohamed Rafik, aka ‘Aleef Hamilton’, scored a hat trick with yet another title to his name. This time though, the Singaporean was so dominant that he secured the title with a round to spare. Mikko Nassi put up a solid fight in the championship, but a poor result at Laguna Seca was what really sealed the deal for Aleef. Nassi was 48 points behind to finish 2nd overall in the standings, while Naquib Azlan from Malaysia won the final round at Indianapolis GP to take 3rd.

Meanwhile, the highest-placed drivers from the Philippines were Luis Moreno and Iñigo Anton. Moreno delivered a string of Top 5 finishes to land 7th in the championship. Anton, on the other hand, missed a Top 10 spot by only 10 points. 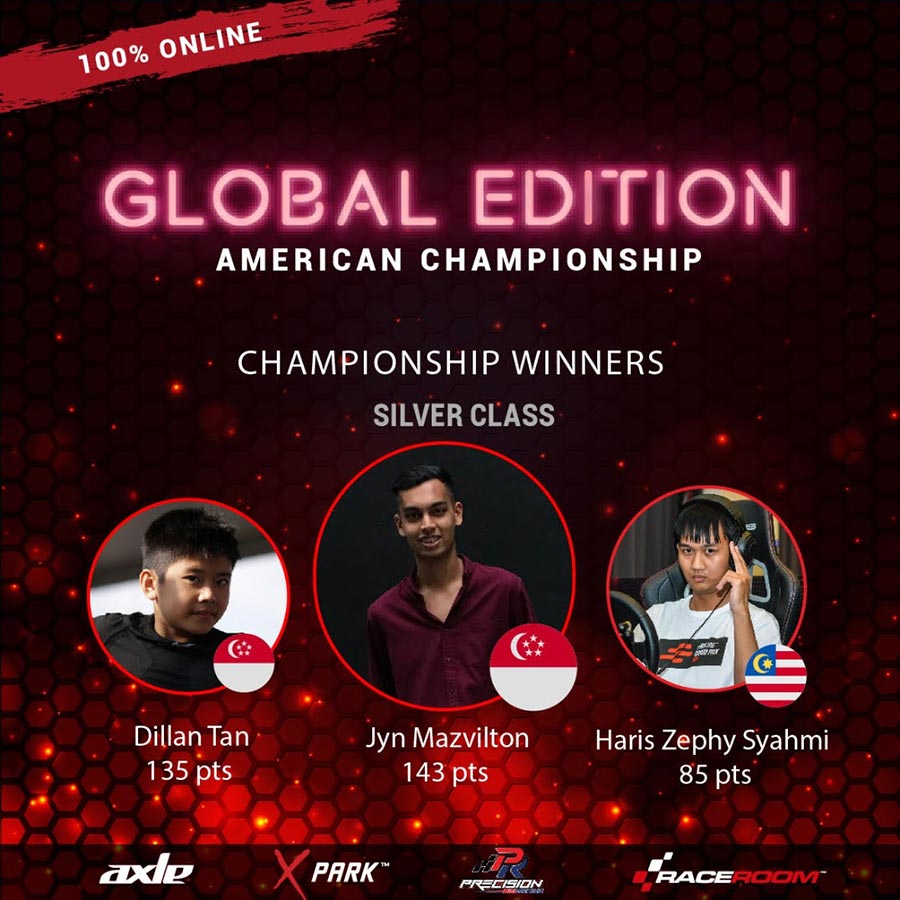 SILVER CLASS (FORMULA 3)
The title fight for the Silver Class championship went all the way down to the wire between Singaporean drivers Jyn Mazvilton and Dillan Tan. They took turns in winning races and was only split by 8 points when the series came to a close with Mazvilton taking the title with Tan in 2nd. Haris Zephy Syahmi from Malaysia hung onto 3rd place, but was a good 50 points behind the leaders.

Seven Star Garage driver Oliver Aquino landed 4th in the Silver Class standings ahead of Paul Faustino in 5th who was also from the Philippines. 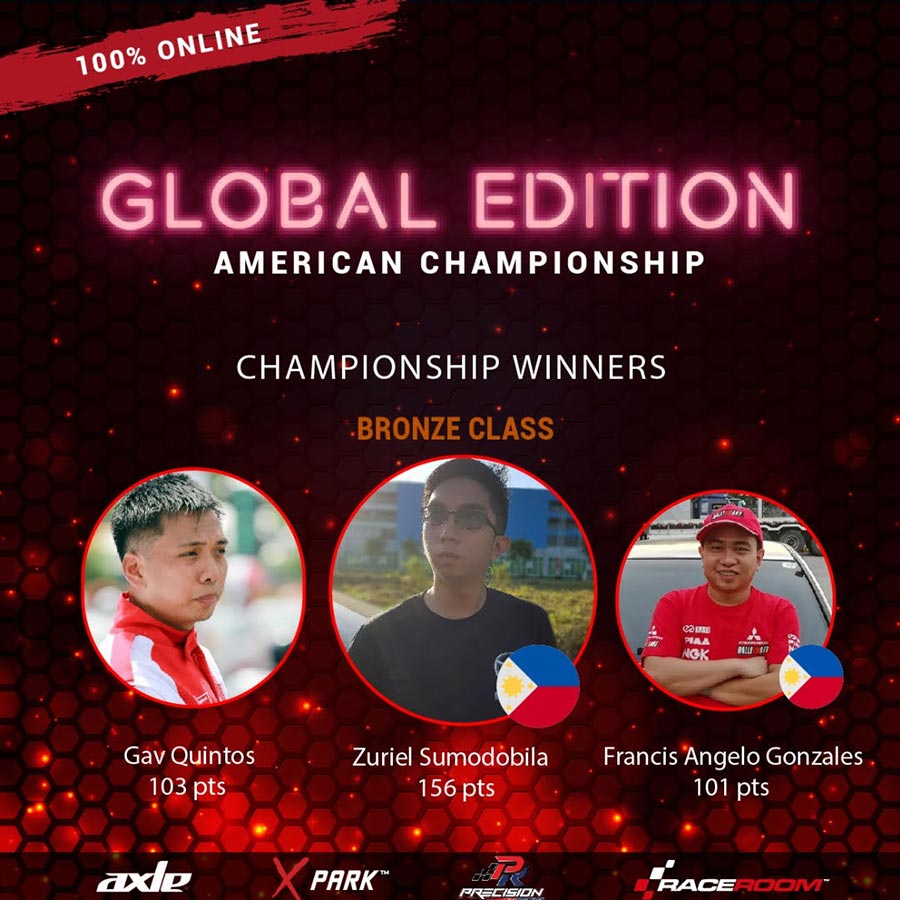 BRONZE CLASS (FORMULA 4)
This is where our boys really shined. Sim Racing Pilipinas drivers Zuriel Sumodobila, Gav Quintos, Francis Angelo Gonzales, and Voltaire Sayco were regulars on the Bronze Class podium throughout the season, even taking Top 4 spots during the finale at Indianapolis GP.

A series of race victories, however, was what allowed Sumodobila to pull ahead in the points standings and claimed the championship with a massive 53 point advantage. Even more impressive was how the driver from Cagayan de Oro won the Copper Class title in the European Championship only a few months back in the exact same manner.

Quintos was in a distant 2nd in the points, followed by Gonzales in 3rd, Sayco in 4th, and a young 9-year-old Axel Nocom in 5th to sweep the Top 5 positions for the Philippines. 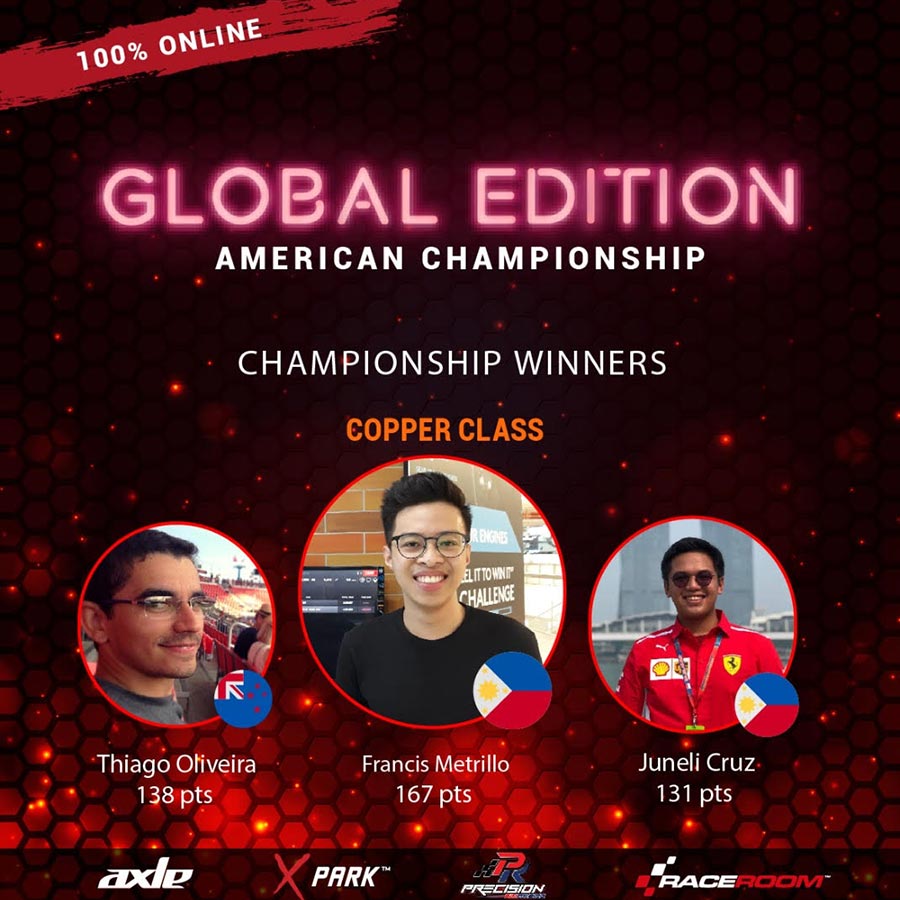 COPPER CLASS (AQUILA CR1 CUP)
Francis Metrillo had to fend off a hard-charging Thiago Oliveira from New Zealand for the championship lead early on. But come the season’s halfway point, Metrillo was able to open a comfortable gap to claim the title 29 points ahead. Juneli Cruz and Zetrick Orate also brought home good results for the Philippines with Cruz concluding the championship in 3rd while Orate was 4th. 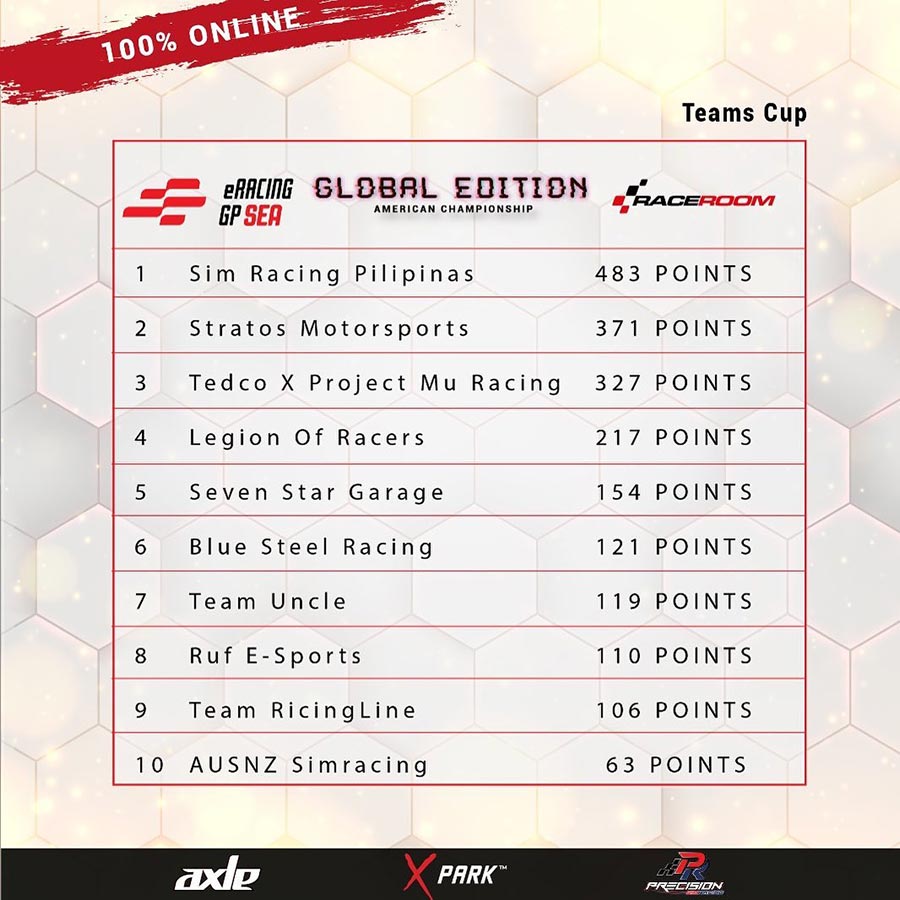 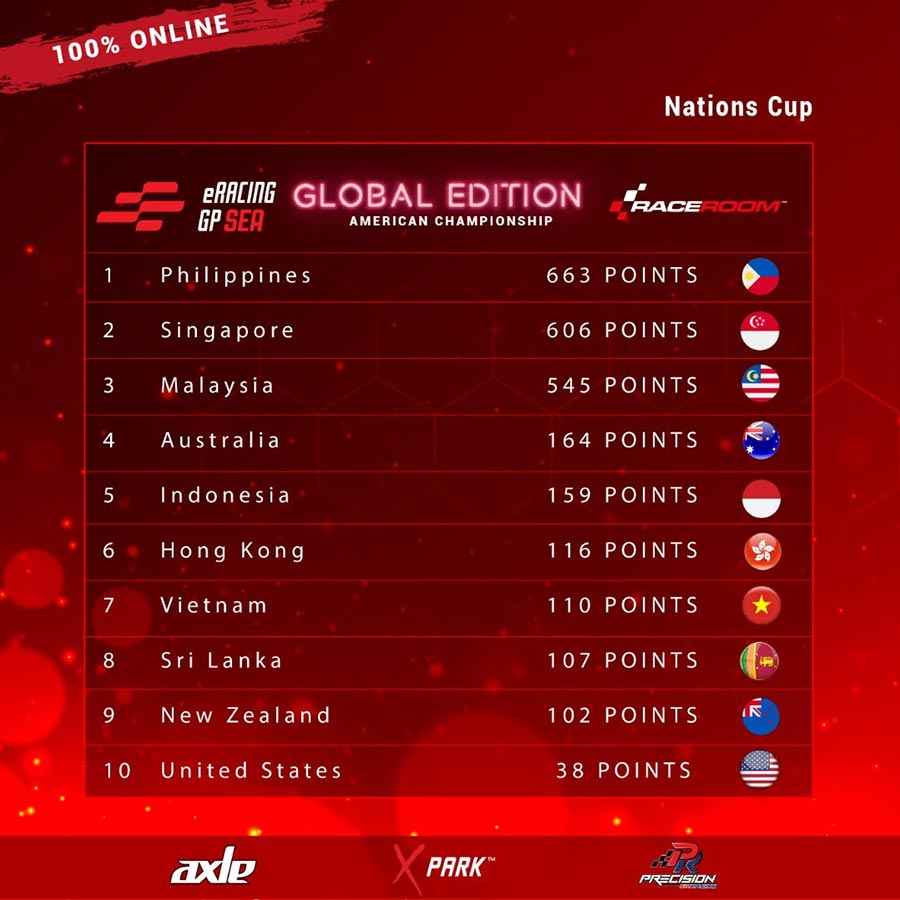 TEAMS & NATIONS CUP
The combined efforts of 11 drivers would earn Sim Racing Pilipinas the very first Teams’ Cup in ERGP SEA history. All-in-all, their points tally reached 483 by the season’s end, which was 112 points clear of their closest rival. Likewise, the outright performance of our local drivers allowed them to outshine hard hitting countries such as Singapore, Malaysia, Indonesia, and Australia. Philippines would go on to win the Nations’ Cup with 683 points or exactly 77 more than Singapore in 2nd place.