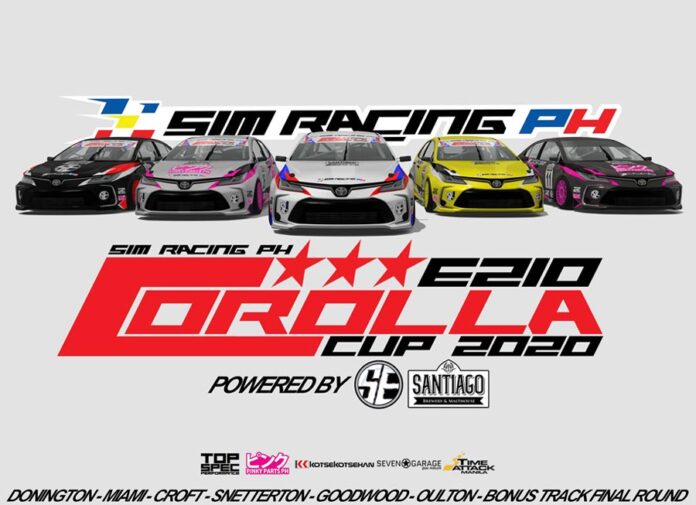 That’s the beautify of eSports. Unlike real-world motorsports, here you can go racing anytime, anywhere, for a lot less. And that’s exactly what Sim Racing Ph (SRPh) have been up to during this pandemic with their string of online events one after the other. This new one might be their biggest to date, the SRPh Corolla E210 Cup 2020 that kicks off in September.

Powered by SoulExhaust x D4Graffix Servers and Santiago Brewery & Malthouse, the 6-round series takes after the ultra-successful VVTi Cup. But this time with faster cars, more ‘hardcore touring car action’ as the organizers promised, and a switch from rFactor to Assetto Corsa.

Competitors will be split according to skill level into 3 categories: Gold, Silver, and Bronze. Those in Gold and Silver will run together in the ‘Premier Class, while newbies get their own Bronze Class grid. Everyone also gets to earn points towards the drivers’ and teams’ championship. There is, however, a 20 driver limit per class so you’ll have to qualify in the Time Attack Qualifier per event in order to earn a slot on the grid.

Those who do manage to get in must then get ready for the 2x 15-minute sprint races scheduled on Sundays, with a reverse grid in the succeeding race for the Top 6 finishers. While the races are short, note that damage will be set on full so drivers still need to behave.

But the most important detail to those entering the SRPh Corolla E210 Cup 2020 is that a (unique) race livery is required.

Anyone with a Windows-based computer, whether laptop or desktop, can enter the SRPH Corolla E210 Cup 2020. A steering wheel controller is optional, but is highly recommended. Just head on over to Sim Racing Ph’s Facebook Group for detailed instructions, what files you need to install, and how to race with them online.

All the SRPH Corolla E210 Cup 2020 events will start at 4:00 PM on 6 consecutive Sundays, streamed live on the Sim Racing Ph Facebook Page.