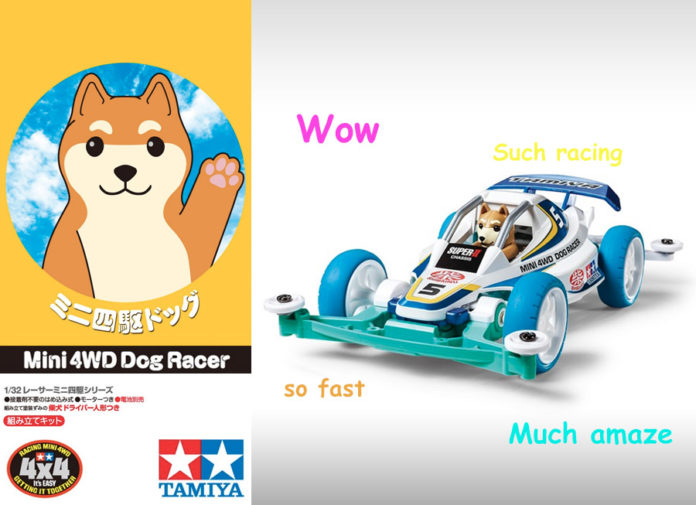 Being the Japanese company that they are, Tamiya loves to get comical with their Mini 4WD designs. We’ve seen them come up with unusual driver figures every now and then like the Kumamon, Shirokumakko, and Panda versions just to name a few. The newest addition to their growing list of oddballs is Item No. 18086 that, get this, has a Shiba Inu sitting behind the wheel.

The ‘Mini 4WD Dog Racer’ sits on a typical Super-II chassis, but molded in light green plastic, with a white single seater buggy body. But what makes it extra special and extra adorable is its pre-assembled and pre-painted Shiba Inu dog driver figure.

There’s also a sticker sheet included the kit with the character ‘柴’ which stands for shiba. Other equipment included in this assembly kit are white, large diameter V spoke narrow tires with cyan arches wheels.

Item No. 18086 Mini 4WD Dog Racer is scheduled to be released by Tamiya this March 11, 2017. If you want one, Mini 4WD assembly kits can be found in Hobbes & Landes and Blade Auto Centers nationwide or sourced from Tamiya’s official distributor Lil’s Hobby Center.