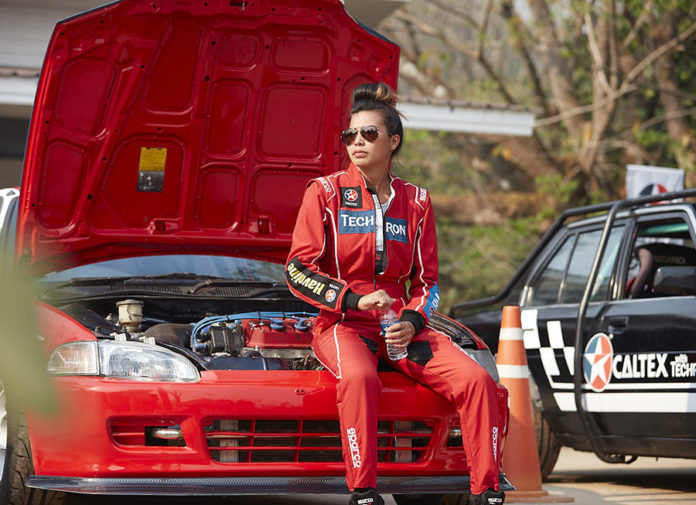 Caltex has set a new Guinness World Record (GWR). Using an ‘everyday car’, running on their fuel with Techron® technology, lady driver Natasha Chang now holds the record for the ‘Fastest ascent of Doi Chang Mountain road by car’ going up a 1,000 m ascent in 6 mins and 52.692 secs.

While that may sound amazing, it raised more questions than answers (at least for us) mainly due to the lack of details surrounding the record-setting run. So, we poked around to put more substance to their claim.

Where in the world is Doi Chang Mountain?
Honestly, very little is written about the ‘road’ itself, whether you check the press materials or even on their official url www.caltexrecordrides.com. This forced us to dig in the deepest parts of the interwebs and watch 2x overly-scripted episodes of ‘Record Rides’ on National Geographic just to get the numbers right.

What we found out was that Doi Chang Mountain is one of the highest peaks on the north-western boarder of Thailand in the province of Chiang Rai. We got so obsessed at finding this patch of highway that hours were spent just looking for it on the map, which we did and plotted from start to finish on Google.

The route starts at about 560 m above sea level, with an average gradient of 11.2%, and stretches a distance of 8.5 km. In comparison, the Pikes Peak International Hill Climb has an elevation change of 1,440 m, with a gradient of 7.2%, and covers 19.99 km of tarmac. Essentially, that makes Doi Chang Mountain a miniature Pikes Peak in Asia.

Although we do acknowledge that it’s not an easy hill to climb, we wonder: what’s the significance of laying a claim on Doi Chang Mountain? 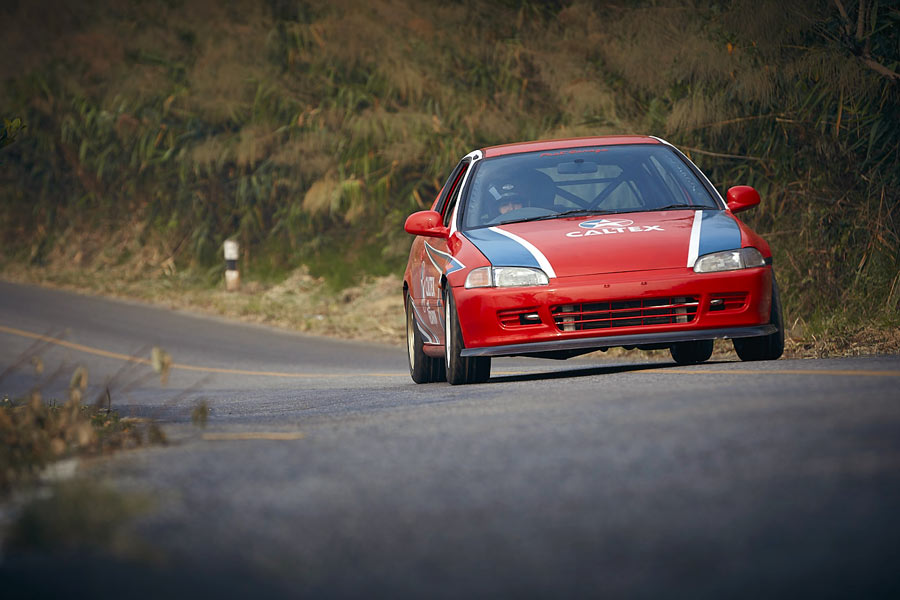 Why set a record in a 28-year-old Honda Civic?
Then there’s their weapon of choice. When the Nürburgring lap record has now turned an arms race between the top manufacturers in the world, Caltex thought that the best representation of their latest fuel tech is through a 28-year-old Honda Civic EG with a humble 130 hp from its 1.6L 4-cylinder SOHC engine.

By the looks of it, this has something to do with their marketing pitch that the very same Caltex with Techron® fuel that set a world record can also power you everyday drive. But surely they could have chosen something more contemporary, something more capable, something that’ll get people’s hearts racing like a Porsche 911 or maybe even a modest Mazda MX-5 ND would do.

Still, of all the possible choices out there, why go for a 28-year-old Honda? 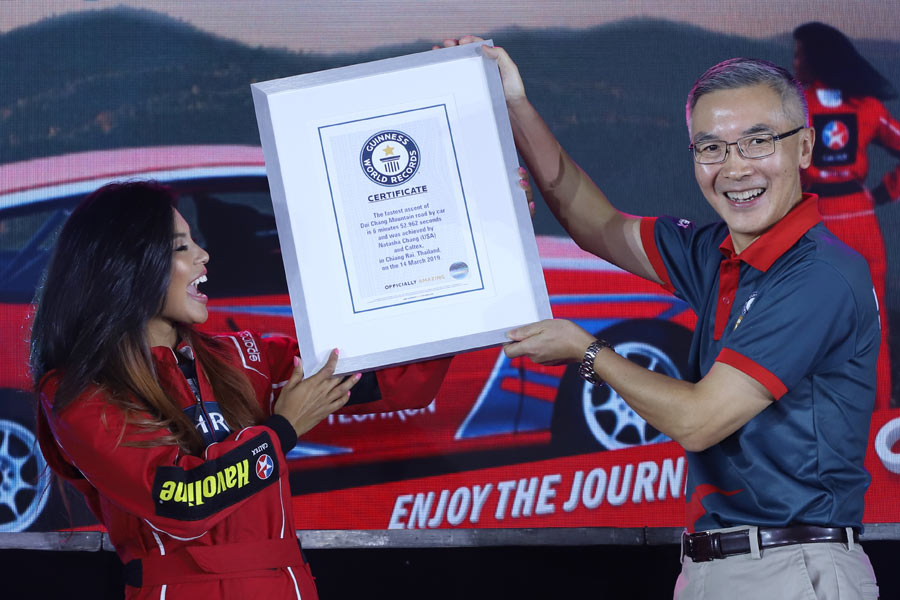 Who is Natasha Chang?
If there’s a true hero in all of this, it has to be Natasha ‘Chiney Dolly’ Chang. The included literature only describes her as a ‘professional rally race car driver’, but a quick search reveals that she has more accolades to her name on different surfaces. The Jamaican-Chinese got into motorsports as far back as 2006, competing (or at one point competed) in Rally Jamaica driving a Group N Mitsubishi Evolution 5 and the Caribbean Motor Racing Championship in a Honda S2000 just to name a few. She’s also been backed Chevron Corporation-owned Texaco since 2013.

Her record-setting run up Doi Chang Mountain was also the real deal, with real dangers, real cliffs she could fall from, and a real chance to hurt herself. She did 2 timed runs in total, the first of which ended up in the barriers, but in the second she stopped the clock at 6 min 52.692 secs.

Punch in the numbers and you’ll quickly realize that she averaged 74.10 km/h over the 8.5 km course corners and all, while climbing 1,000 m straight up, in a 28-year-old Honda Civic. The engine was also said to have lost about 1% of its power for every 100 m climbed, which meant she only had about 117 hp left at the summit. 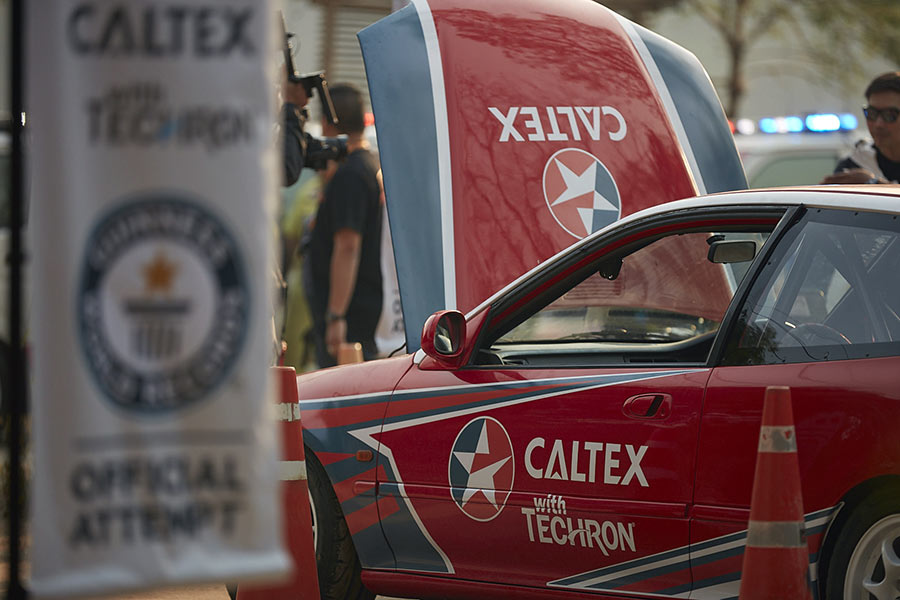 Caltex’s run into the record books is a PR stunt, obviously. It’s meant to send a strong message not just to their clientele, but to their competitors as well telling them to f*ck off, we’re better than you, bring it on. Hopefully, they were able to set the bar high enough that it stands for decades, if not an eternity that it becomes stuff of legends.