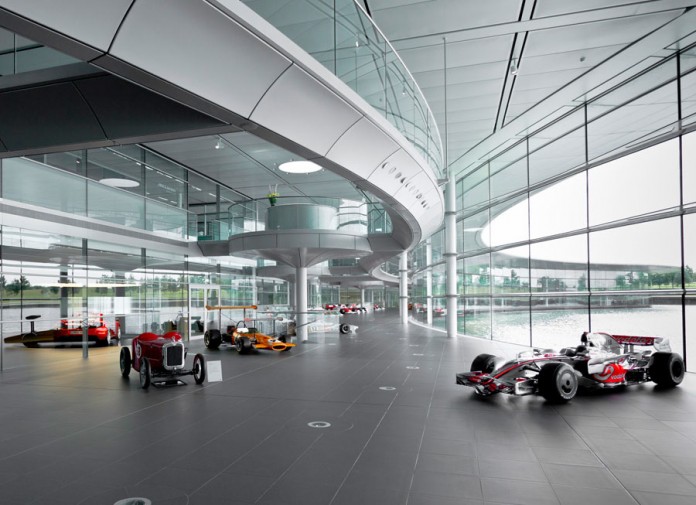 Unlike the Lamborghini Museum and Honda Collection Hall, we’re pretty sure that McLaren’s Technology Centre in Woking, Surrey is strictly ‘by invite only’. But with the help of Google Street View, you can now take a virtual tour anytime, anywhere.

The McLaren HQ is a 57,000 sq. meter state-of-the-art facility that houses their Formula 1 team, GT racing program, and wind tunnel. It’s also here where they meticulously hand-craft each MP4-12C and P1 for customers worldwide.

“The McLaren Technology Centre is widely considered to be an architectural icon,” said Team Principal Martin Whitmarsh. “Of course, it’s also so much more: It is the beating heart of a technology, motorsport and automotive group which this year celebrated its 50th anniversary. To mark this milestone, and reward our many loyal fans, we’re pleased to be able to open our doors to the public, with the help of Google.”

These guys, however, didn’t let the chaps from Google expose their trade secrets online. So no, you won’t be able to see where they build their 2014-spec Formula 1 car here. Instead, you can take a tour of the lobby where they house their most precious and historic cars.

Here you’ll find McLaren’s Can-Am and Indianapolis 500-winning cars from the ’60s and ’70s. There’s also a street and race version of the coveted McLaren F1 in the mix, plus a MP4-12C. But the most important collection is McLaren’s Formula 1 cars that represent different eras, including Porsche-engined cars from the ’80s, Ayrton Senna’s Honda-powered machines, and more modern silver Mercedes-Benz cars driven by Mika Hakkinen and Lewis Hamilton.

Further exploration will reveal a long corridor that McLaren uses as their huge trophy cabinet, housing tokens from 8 constructor’s championships, 12 driver’s championships, and 182 race victories. Sadly, none of them came from a podium-free 2013 season.

Because they’re trying to keep things under wraps, only the main hall of McLaren’s Technology Centre is available on Google Street View. They’ve even blurred out the windows on certain rooms to hide whatever they’re working on inside. But if you do find a secret passage, do let us know.

Check out McLaren’s Technology Centre for yourself below or hit the link (for mobile): http://goo.gl/maps/uK4U1