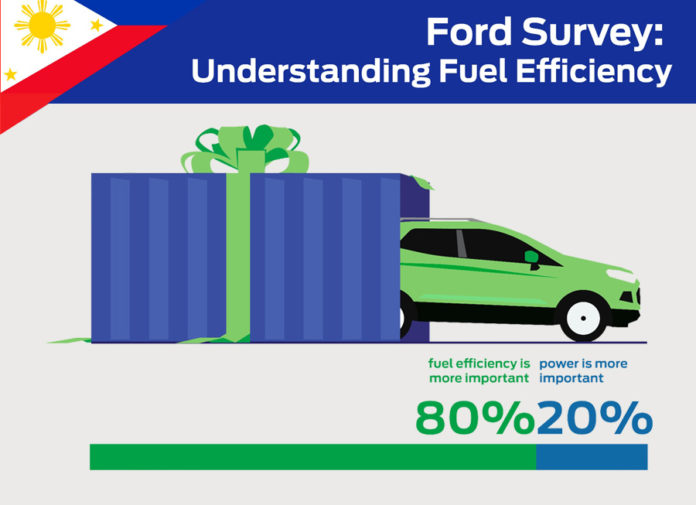 Until humans find an alternative to fossil fuels, we’ll continue to drive gas-guzzlers and run the world’s oil wells dry. That’s why the Ford Motor Company has heavily invested in their EcoBoost tech to make their vehicles more fuel-efficient without sacrificing performance as an interim solution. But does it really help them attract more buyers?

In June, they commissioned a survey of more than 9,500 drivers in 11 markets across the Asia Pacific region to see how fuel efficiency influence a car buyer’s decision. 783 of those respondents came from the Philippines and this was what they had in mind.

“We conducted this survey to learn more about what consumers’ attitudes are towards fuel efficiency when they are shopping for a new car,” said Kevin Tallio, Chief Engineer, Engine Engineering, Ford Asia Pacific. “Fuel efficiency remains one of the top concerns. Drivers continue to be sensitive to fuel costs, no matter what the price is at the pump.”

The study did not simply ask whether fuel efficiency was important or not in the car buying process. It really dug down deep to ask why was it important, whether anyone bothered to consider the long-term savings, and how oil prices affected things. You can what people had to say about fuel efficiency in the infographic below.

What’s interesting though was how 66% of the people surveyed expressed their plan to buy a vehicle with a more fuel efficient engine within the next year. Perhaps someone should tell them that Ford Philippines offers 6 models locally that are equipped with EcoBoost engines. That includes the Fiesta, Focus, Escape, Explorer, Expedition, and Mustang.

“Filipinos are very practical consumers, and getting much more sophisticated in their purchase behaviors,” said Lance Mosley, Managing Director, Ford Philippines. “They expect their vehicles to be fuel efficient enough to deal with the country’s traffic congestion, but also powerful enough to fit their respective lifestyles.”