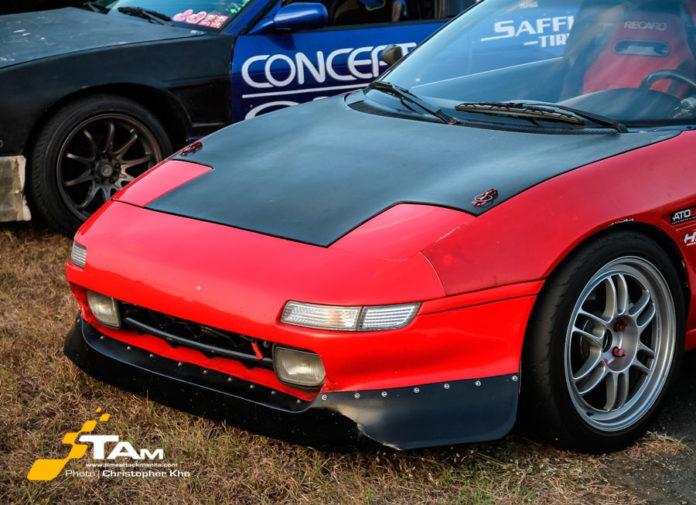 If you’ve been around car shows and track days, you’ve probably seen modified cars sporting flat black hoods. But have you ever wondered where this trend came from and what’s the reason behind it? Well, read on.

These are usually seen together when one upgrades to a lightweight fiberglass hood. Some would think that it’s just painted flat black because the owner had no budget left to properly paint it in a color matching the car. (Well, that’s true in the case for my car.) However, this trend traces its origins back to race cars.

In most cars from the ’80s and older, the hood doesn’t slope down as much, so you can see it from the driver’s seat. And when the sun hits the hood at a certain angle, it creates glare that’s very distracting the driver. Whether the hood was steel or fiberglass, it became common practice to paint it with non-glossy paint – black being the default choice as it was best at absorbing light.

This is the exact same reason why NFL players put black paint under their eyes.

To some extent, this is still practiced in race car builds today even if modern cars have hoods that slope down out of the line of sight. What they do is cover the dashboard in a suede-like material, thus eliminating glare for the same reasons. Check out the new WRC and GT cars to see what we mean.

But for modified cars, the flat black hood is a bit passé and is replaced by the new trend of carbon fiber sticker wraps. While not being functional (aside from being a quick fix if you can’t paint your faded hood), it emulates a raw carbon hood seen on some tuner and race cars.

As with many things, modified cars follow the trends they see on the race track.

DISCLAIMER: The MR2 in the photo does not have a flat black hood. What you see is in fact a very old and faded carbon fiber hood, but you get the idea.