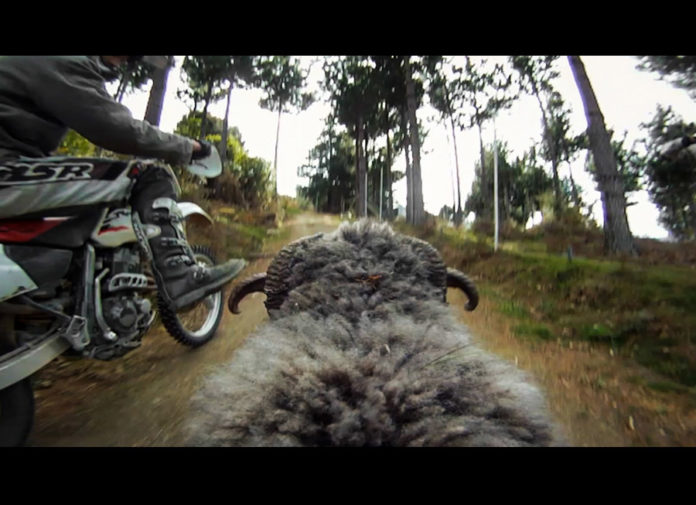 Meet Rambro, the legendary ‘Angry Ram’ whose purpose in life is to terrorize and drive away all the adventure riders foolish enough to take their motorcycles through his realm. And unlike other mythical creatures that guard forested hills, this one is documented on film.

The way in which Rambro exercises his duty with such consistency and zeal is a testimony of adversarial inspiration against the existential quandaries that oftentimes plague humanity.

Braving this formidable (and adorably fluffy) beast is something that should make the bucket list of every serious adventure rider out there. The task of getting past the crazy bastard untouched looks just as epic and challenging as your next Mongolia, your Dakar Rally, or your Red Bull Hare Scramble.

ARE YOU MAN ENOUGH, BRO?!

Rambro hates dirt bikes. He hates people. He hates everything that moves within his kingdom… Wait. Is this really hate, or is it merely nature’s impartial workings? Rambro, after all, is an Arapawa ram—a sheep with an impressive set of curved horns used as weapons during the mating season. Some species can make friendly pets under the right hereditary traits and circumstances, but males will butt each other like gladiators during the rut. The displays of dominance get more hardcore and impressive in the wild.

Sometimes Rambro will appear chill and nonchalant, but never let your guard down. He is a wild beast. He will attack you. He will f*ck you up. It is inevitable. After all, he is the animal that those big RAM trucks by Dodge were named after. Rambro will wreck your shit and he will always come out on top, with you either crumpled on the ground or fleeing.

Watch the original Angry Ram video that spread like wildfire on world news, mainstream media, and the interwebs.

Marty Todd, a landowner in New Zealand, then mounted a GoPro on the Angry Ram. See Rambro break bike parts and chase a motorcycle in full gallop from his own POV.

Rambro even made it on the official GoPro YouTube channel with 57-seconds of fame.