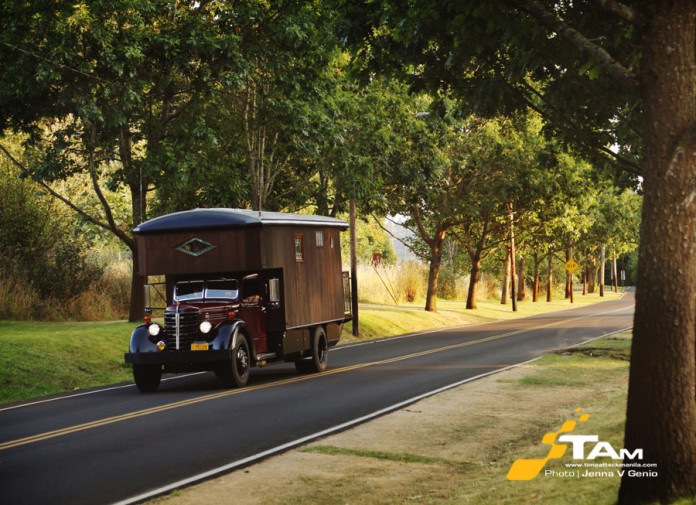 Chances are you’ve heard the phrase “Built Not Bought,” and the alliterated cliché usually comes with arguments on criteria. Here is a build that cannot be contested. This beautiful gypsy caravan motor home is the real deal. Meet The Big Maroon by John Driscoll.

Gypsy John’s Big Maroon vintage house truck in Portland, OR is a gypsy caravan motor home built on a 1959 Federal truck that was originally a flatbed farm truck that John purchased for $125 with a bad engine in 1971 when he was only 21. It’s been a nonstop labor of love since. 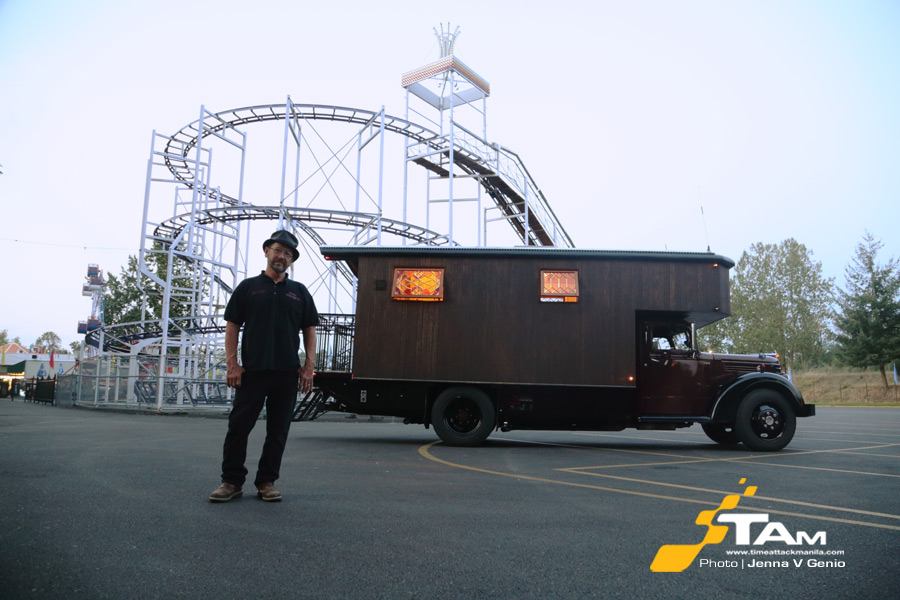 He had help along the way (which he is quick to credit), but John wanted to do as much of the work himself, insisting on getting his hands dirty on every modification and addition to his gypsy creation, including but not limited to the fabrication, carpentry, glasswork, mechanics, and electrics involved. He truly built the behemoth.

The Big Maroon’s exterior shell was completed in 1975 and John immediately started using it as a motorized gypsy caravan. It stands 11 ft tall and 25 ft long, weighing at 1,500 lb “including water, fuel, a boat, motorcycle, groceries, and a dog.” Creature comforts include a shower, water heater, lighting, and a forced air gas furnace. Gallons allotted for fresh water, gray water, and black water are managed in RV style. Aluminum compartments can accommodate a folded 14” Zodiac inflatable boat with a 40 hp Suzuki outboard motor among other things. John also fabricated a hydraulic motorcycle lift. 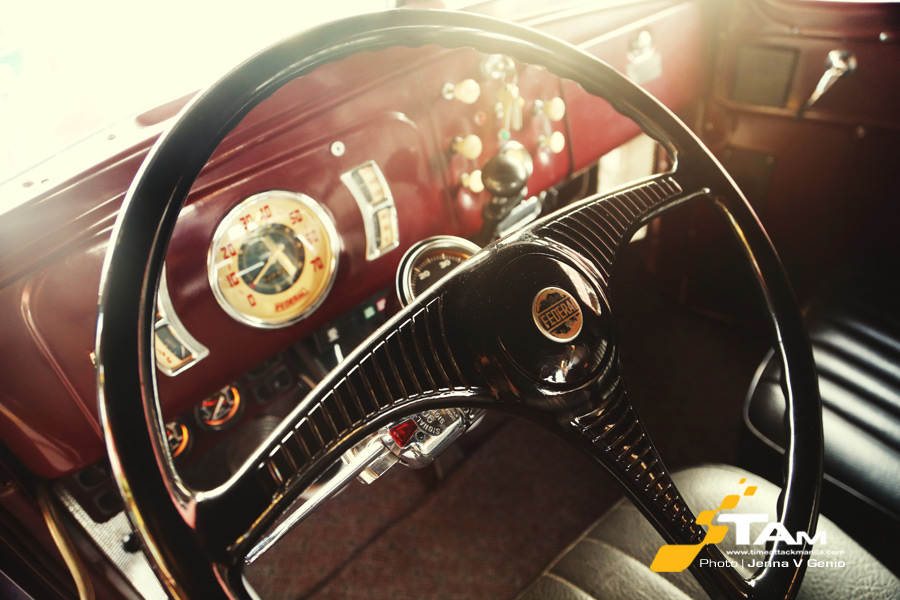 His adventures initially ran on a Pontiac 2-barrel 389 and a GMC 4-speed tranny with a 2-speed rear end, but in 2005 John swapped it for a 455 with Edelbrock aluminum heads, intake manifold, and 650 carburetor—assembled with the help of Maslin Machine and tuned by Major Murray. He mated the new powerplant to a New Process 540 5-speed, adding a McLeod bell housing and clutch. John got his custom cam grind job done by Rock and Roll Engineering. Power steering was off a Ford F450. Replacing the drum brakes in 2010 with F550 discs was an undertaking, requiring the custom caliper mounts, an Isuzu front axle, and a modified Spicer 150 4.38 rear axle. He also installed a Gear Vendor overdrive the same year. Another source of pride for John was his 60 lb custom designed hubs by Dutchman Motor Sports and custom 5-hole Budd 22-1/2 in wheels by Wheels Now. 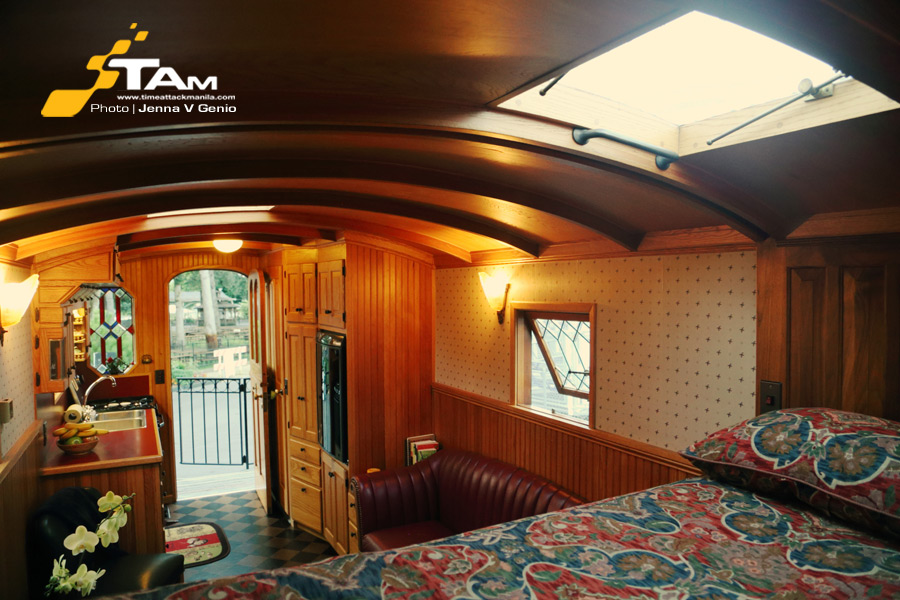 The details were astounding in construction and carpentry. Gypsy John is a true craftsman. The double roof (he cites Land Rover’s Safari Roof as inspiration) provides insulation from both the cold and heat. Vintage sconces line the walls. The cabinets he made for the interiors were angled perfectly to save space, wrapping around everything with clean precision and clever diagonals. He even made the pretty stained glass, which required a tedious 20-step grinding process. His motor home masterpiece is bursting with so much beauty and warmth.

The handles on every door and drawer were charmingly selected; the furniture, upholstery, décor, and colors were co-curated by his wonderful wife Valerie. Even the clearance lights glowed in the most inviting way. The Big Maroon’s back porch railing and roofline reminded us of old trains and I just have to mention that his billet aluminum windshield opens out too, and we loved that the Flying Spaghetti Monster was represented on the rear. 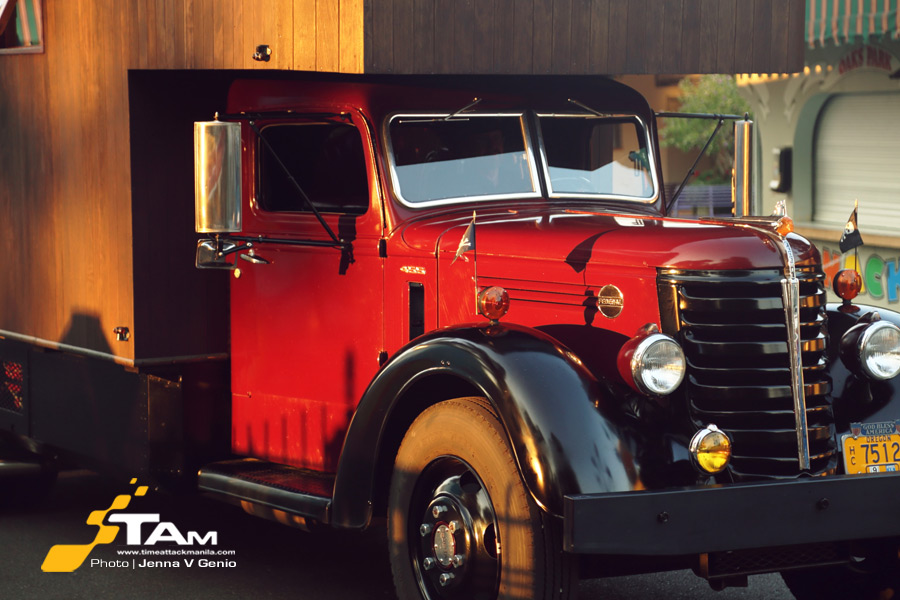 At the end of the day, by twilight’s time, my breath had been taken away. I just looked into someone’s life’s work, literally—a project that kept on being added to and improved on for more than 40 years… Driven more than 40,000 mi through 20 states and Canada. Gypsy John Driscoll is a rare breed, one of those incredible exemplars of that famous hard-working American DIY culture. He says it’s never done those of you with forever builds will relate to that feeling of it’s-never-quite-perfect, but The Big Maroon sure seemed like it already was—perfect. It was an inspirational day that made me look back on my life, seeing that I hadn’t accomplished anything quite that remarkable, wondering if I ever would.