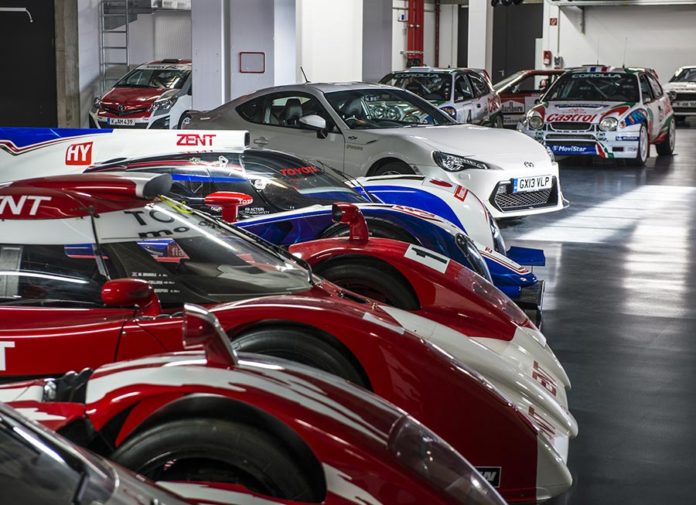 Formerly known as Toyota Motorsport GmbH (TMG) and historically as Toyota Team Europe (TTE), the freshly-renamed Toyota GAZOO Racing Europe (TGR-E) has a history that now spans nearly 5 decades across the WRC, Formula 1, and Le Mans 24 Hour. And over the years, they’ve amassed quite a collection of their most significant milestones housed behind closed doors at their Motorsport Museum in Cologne, Germany.

But while the world is on lockdown, they’ve decided to give everyone a 360° virtual tour of their vault and explore the epic collection of legendary Toyota race cars.

Their very first rally car was the Celica 1600GT, before switching over to the Celica Liftback RA40, then onto the Celica TA64 that dominated Safari rallies. But It was during the Group A era when Toyota achieved all of their 3 teams’ and 4 drivers’ championships in the WRC.

Carlos Sainz Sr. became ’90 world champion behind the wheel of a Celica ST165. The Celica ST185 that followed then earned ‘El Matador’ his second title in ’91 before it went on to take back-to-back manufacturers’ and drivers’ world championships in ’93 and ’94. Toyota’s third manufacturers’ title would come years later in ’99 with the Corolla WRC.

You’ll also spot several Yaris WRC test mules in the background with no livery, along with Toyota’s stillborn Group B rally car the MR-2 AW11 222D. But unsurprisingly the ST205 that got them banned from the WRC is nowhere in sight.

Competing under the team name Panasonic Toyota Racing, they turned their focus to Formula 1 where they collected 139 GP starts, 13 podiums, and 3 pole positions over the course of 8 year. The one in the middle was from their very last season the TF109, driven by Timo Glock and Jarno Trulli.

But our favorite from the entire museum has to be Toyota’s collection of prototypes that represents each generation that competed at the 24 Hours of Le Mans. We’re talking about the TS010 in Group C, TS020 in GT1, and the latest series in the LMP1 era that consisted of the TS030, TS040, and 2-time winner the TS050. You’ll also spot 1 of only 2 examples of the GT-One road cars ever built displayed right at the main entrance.

Which race car is your favorite?

Begin your tour of the Toyota GAZOO Racing Europe Motorsport Museum by clicking the link: https://bit.ly/3e92WFd