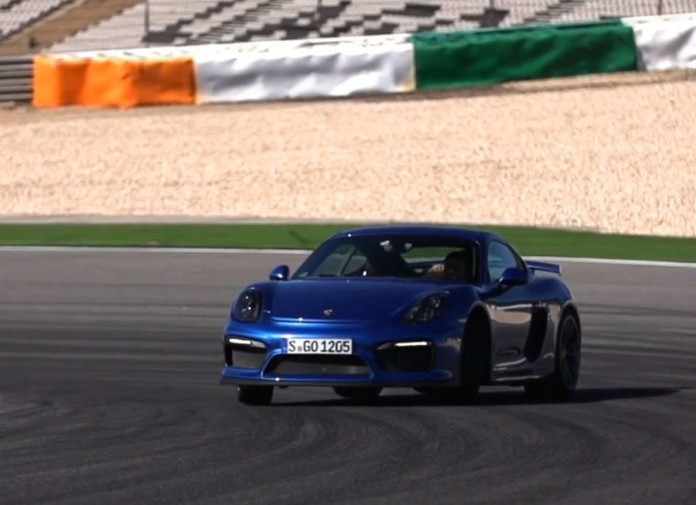 Without a doubt, auto journalist Chris Harris is one very lucky man. Not only does he get to drive the most exotic sports cars in the world, but he gets to hoon them on track. The latest addition on his list happens to be the new Porsche Cayman GT4.

Diving right into the specs, this rear-wheel-drive 6-speed manual son-of-a-gun packs a mid-mounted 3.8L flat-6 from a 991 Carrera S, which is capable of 385 hp. It can do 0 to 100 km/h at a heart stopping 4.4 seconds and reach a top speed of 295 km/h. But its claim to fame is that it was able to go around the Nürburgring Nordschleife in a blistering 7 minutes and 40 seconds.

Interestingly, this new Cayman GT4 shares more in common with a 911 GT3 than a standard Cayman. It basically sits on the same front suspension as the 911 GT3, but has completely new components at the rear. There are also bigger and wider 20-inch Michelin tires on all 4 corners, and huge ceramic composite brakes. Porsche also made it 30 mm lower than the regular coupe, plus an improved aero package front and back.

Despite it being mostly built from Porsche’s spare parts bin, what the Germans came up with is the most desirable iteration of the Cayman. And for a price tag of £64,451 (or P4.27 million plus TAX), you can drive one of these bad boys as hard as you want. If not, you can watch @harrismonkey drive one to bits around the Algarve International Circuit, otherwise known as Portimao Circuit, from his YouTube channel Chris Harris on Cars.

Turn up your volume, sit back, relax, and see what makes the Porsche Cayman GT4 so special.