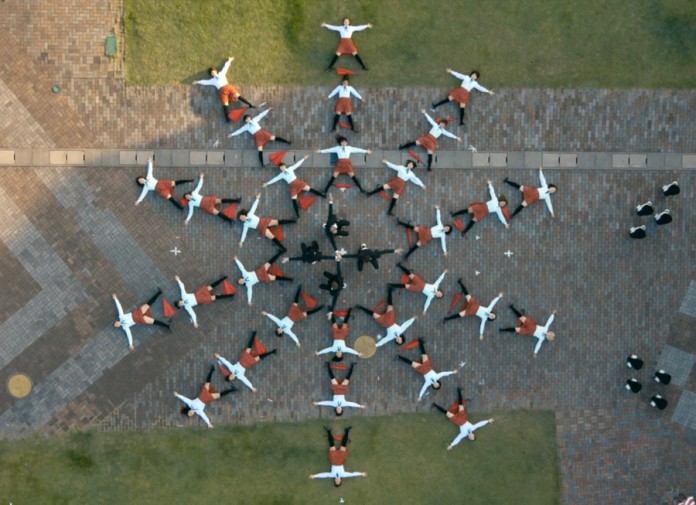 What happens when you put together 2,328 umbrella-clad dancers on 2,328 Honda UNI-CUB β unicycles and one of the most creative indie rock bands in the world? Well, it could only be an epic music video for OK Go’s latest single “I Won’t Let You Down.”

The 5 minute video, directed by Kazuaki Seki and OK Go’s frontman Damian Kulash, features Kulash and fellow band members Tim Northwind, Dan Konopka, and Andy Ross dancing on UNI-CUBs supplied by Honda (who by the way, also paid for the film). The Japanese automaker describes it as a “personal mobility device,” but we simply think of it as the unicycle equivalent of a Segway for people who are too lazy to walk.

At least the guys at OK Go found a new and clever use for it.

The music video also required 2,328 dancers in knee-high socks and pleated skirts (also riding individual UNI-CUBs) to perform an intricately choreographed routine with umbrellas in perfect sync. And the result is a jaw-dropping end scene that mimicked a scrolling dot matrix display when viewed from the sky.

The entire sequence was then filmed entirely on a multi-copter drone and took about 50 to 60 tries to get everything right in ONE TAKE. Talk about dedication…

“When you’re employing hundreds of umbrellas that all have to go up at the same time — there’s going to be problems,” said Damian Kulash.

Watch OK Go’s epic music video for “I Won’t Let You Down” off their fourth album Hungry Ghosts below.