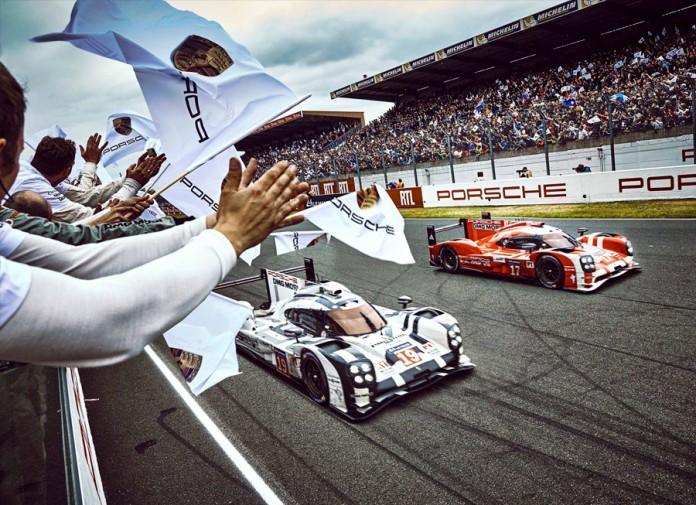 Since the very first Le Mans 24 Hours was run in 1923, no other manufacturer has won the world’s toughest endurance race as much as Porsche. And on its 83rd running, they achieved a very emotional 17th overall victory with the 919 Hybrid.

The last time the German manufacturer won at Le Mans was way back in 1998 with the Porsche 911 GT1. 16 years later, they returned to the famed Circuit de la Sarthe in search for another win. But it didn’t come in 2014 as they had hoped when both their 919 Hybrids suffered mechanical problems. The no. 14 car ended up in 11th, while the no. 20 919 Hybrid wasn’t even classified as a finisher.

The No. 17 car, driven by Timo Bernhard, Brendon Hartley, and Mark Webber, was painted red as homage to the 917 KH that earned Porsche’s very first Le Mans victory in 1970. That machine would eventually complete 394 laps to finish 2nd. The No. 18 car, shared by Marc Lieb, Romain Dumas, and Neel Jani, was painted black as a symbol of the technical kinship between the 919 Hybrid and 918 Spyder hypercar. Unfortunately, things didn’t go as planned and it ended up 5th overall.

Then, there was the car No. 19 of Earl Bamber, Nico Hülkenberg, and Nick Tandy painted in white which was the traditional racing colors of Germany. It was the least experienced trio in the group and was considered by most as Porsche’s wild card. But with consistent quick laps, almost 0 errors, and a little bit of luck, the rookie team was able to claim Porsche’s 17th overall victory in over 60 years.