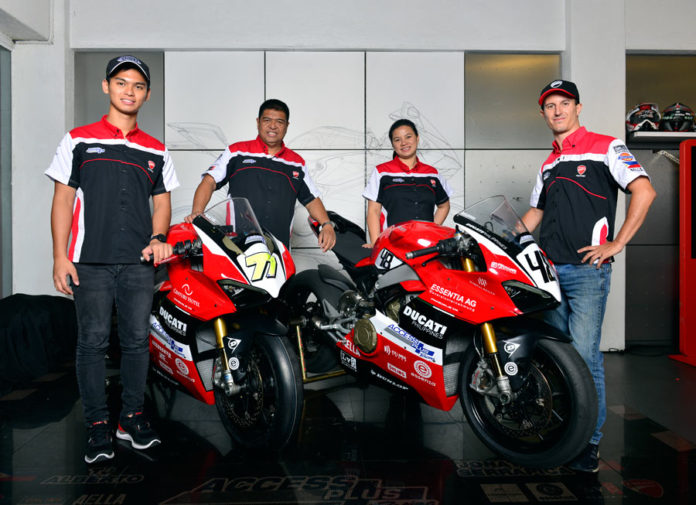 Access Plus Racing has confirmed that it will be fielding 2x Ducati Panigale V4Rs in the 2019 Asia Road Racing Championship’s (ARRC) top ASB1000 Class. The team will run under the team ‘Access Plus-Racing-Ducati Philippines-Essenza’ with riders Timothy Joseph “TJ” C. Alberto and Jonathan Serrapica.

TJ Alberto is a 2-time Philippine Superbike Novice and Intermediate Class Champion before he went international. The 21-year-old raced for 2 seasons in Europe, entering the 2017 Campionato Italiano Velocita (Italian Superbike Championship) followed by the 2018 World SBK Superstock 1000 where he consistently finished in the points. This will be TJ’s debut season in the ARRC and will be the only Filipino rider in the top ASB1000 category.

Italian-Swiss rider Johnathan Serrapica, on the other hand, was the 2017 Malaysian Superstock Champion and finished runner-up in the 2018 Malaysian Superbike Championship. Despite having only 4 years of racing experience, he was able to reach the top class in superbikes in such a short time.

Both Access Plus Racing-Ducati Philippines-Essenza riders will use the latest-spec Ducati Panigale V4 R. The machines are supplied and supported by Ducati Corsa and are the WSK-homologated version of the Panigale V4. Rated at 217 hp and 112 Nm of torque, the Panigale V4 R adopts advanced aerodynamics and adjustability similar to the GP16 MotoGP race bike. It uses Öhlins fully adjustable titanium nitride NPX fork upfront and a fully adjustable Öhlins TTX36 monoshock at the back.

Access Plus, with its partners Ducati Philippines and Essezna, is entering the Asia Super Bike 1000 (ASB1000) to properly represent the Ducati brand in the ARRC and demonstrate its potential against the top factory teams in Asia. They will contest in the full 2019 calendar, taking them to circuits in Malaysia, Australia, Thailand, Japan, and South Korea, and kicks off this March 8/10 at the Sepang International Circuit.

TJ Alberto, No. 77 Ducati: “Coming from 2 seasons racing abroad, I feel well prepared for this new championship. I’ve spent the last 5 years with Ducati and know the Ducati DNA quite well. I’m looking forward to racing against the top guys in the ARRC who also come from very prestigious championships. Most of the tracks in the 2019 calendar are new to me, so I’m really excited how everything pans out.”

Jonathan Serrapica, No. 48 Ducati: “It is a great opportunity to be part of Access Plus Racing-Ducati Philippines-Essenza and to have an experienced rider like TJ as my teammate. I expect it to be a difficult season, but I’ll do my best and bring something to the team. I hope to make them proud by the end of the season.”

Toti Alberto, Access Plus Racing-Ducati Philippines-Essenza Team Principal: “We’re really excited to have TJ and Jonathan compete in the ARRC’s ASB1000 category. This endeavor will be a new milestone for the team as we’ll be going up against some of the best factory teams and riders from around the region. It’s both daunting and exciting to see how we fare.”