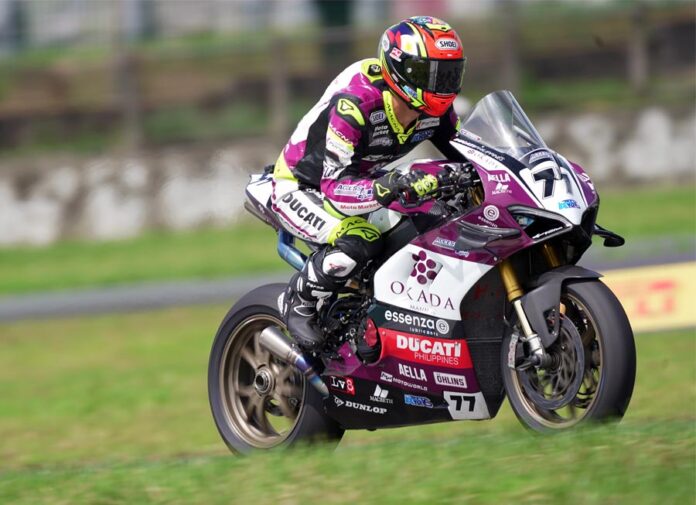 Access Plus Racing-Okada Manila is bracing for their toughest weekend this 2021 as the team heads into season finale of the Philippine Superbike Championship (PSBK) with 2 titles at stake. Father-and-son duo Timothy Joseph “TJ” and Toti Alberto are both leading their respective categories and aim to take the championship this 11th and 12th of December at the Clark International Speedway (CIS).

TJ has delivered a near-perfect season so far taking 7 wins out of 8 races. He and his #77 Ducati Panigale V4R has been dominant at every outing, which the team hopes to maintain in the season ender. Despite his string of victories, Access Plus Racing-Okada Manila is still finding improvements on both TJ and the bike made evident when the 24-year-old ace smashed the CIS track record with a 1:50.137 lap during the previous round. With a 27 point lead in the championship, his main focus will be on securing the Superbike Rider of the Year title.

Troy Alberto is also joining the team’s lineup on a Honda CBR1000RR. The younger Alberto managed to land a podium finish back in October despite nursing a shoulder injury. Now fully recovered, he’s back ready to fight at the front of the Expert Class and join his brother on the podium.

Family patriarch Toti Alberto is likewise in a championship battle of his own in the Masters Class. Riding a red-and-white liveried Ducati Panigale V4R, he has 6 race wins to his name this 2021 and looks to add to that collection this coming race weekend. The strong performance has earned him a 56 point advantage and is on route to take the championship. While the 53-year-old multi-titled veteran shows no signs of slowing down, this could be Toti’s last season in PSBK and there’s no better way to conclude an illustrious career than taking the Masters Class crown

The season ender of the 2021 Philippine Superbike Championship will take place from the 11th to 12th of December at the Clark International Speedway for a double header of Rounds 5 and 6.

TJ Alberto: “I’m looking to do my best to continue to score the points necessary to take the rider of the year title as I head into the weekend with a 27 point lead. All our efforts will be focused on the championship for Access Plus Racing-Okada Manila. If I can get some race wins in the process it will be a good bonus.”

Troy Alberto: “Excited to do the last PSBK round. I struggled in the last one with a shoulder injury and just not being prepared enough with the bike. I think we’re now ready to put up a serious fight and I can’t wait to battle it out with the other guys and help add to the team’s tally of trophies.”

Toti Alberto: “Happy to be leading the Masters Class in PSBK. I am already 53-years-old and this might be my last championship season, so this means a lot to me. It has been a great season for the entire team, especially after being away from the tracks for a year, but it’s even more special that I get to race alongside TJ and Troy.”