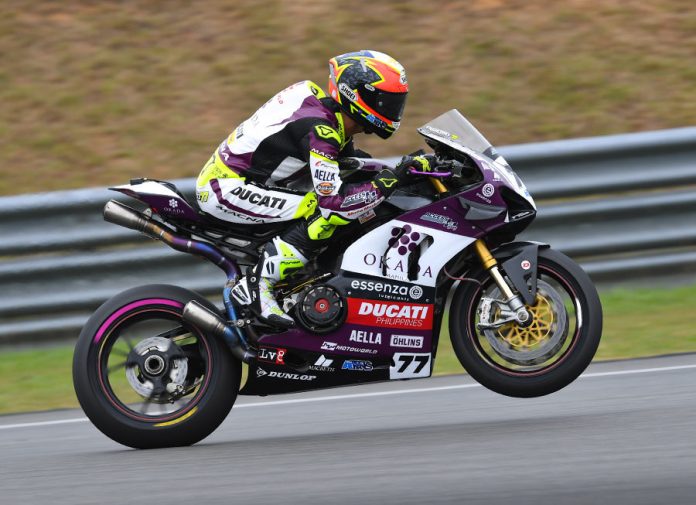 Ducati’s ultra-rare, ultra-exclusive WSBK homologation special is set to make its mark on local soil after Access Plus Racing-Okada Manila confirms their entry into the Philippine Superbike Championship (PSBK). This will be team’s first race since the COVID-19 pandemic and will act as a test before they resume racing overseas later in the year.

Their very capable Panigale V4Rs, the very same ones previously used in the Asia Road Racing Championship (ARRC), will be piloted by father-and-son tandem Toti and TJ Alberto. The elder Alberto will fly the colors for Ducati Manila in the Masters category while his son races the purple-and-white livery of Okada Manila in the main Expert category.

This will be the team’s first time to compete on home turf since 2018. It’ll give Access Plus Racing-Okada Manila much-needed test mileage to get them up to speed after the long break. Moreover, the exercise should benefit other local riders and teams, especially those on Ducati machinery as the team shares their knowledge from years competing on an international level.

The Philippine Superbike Championship will run a condensed calendar for 2021 that will take place over the course of three race weekends, with double headers during each event to complete a 6-round season. All races will be held at the Clark International Speedway (CIS) starting this 19th/20th of June for the first of 3 back-to-back legs. Succeeding races will then be held on the 7th/8th of August and 2nd/3rd of October for the season finale.

TJ Alberto: “With the start of the PSBK now confirmed, we’re happy to announce our support for our national championship. This will also serve as a training ground for the team ahead of our Asian races that was postponed due to the pandemic. Likewise, we’re very eager to share our knowledge with local teams and riders from years competing overseas.”

Toti Alberto: “With the current situation, we’ve had to stop all racing activities for more than a year now. We’re really thankful for the Philippine Superbike Championship as it presents a new opportunity for us to get back on track and stretch our legs. I’m excited to get back on the grid again as my last full season was way back in 2017 and will also be our first time to use Pirelli rubber since 2018. The whole team is looking forward to compete locally once again and race alongside some of the best Filipino riders in the country.”