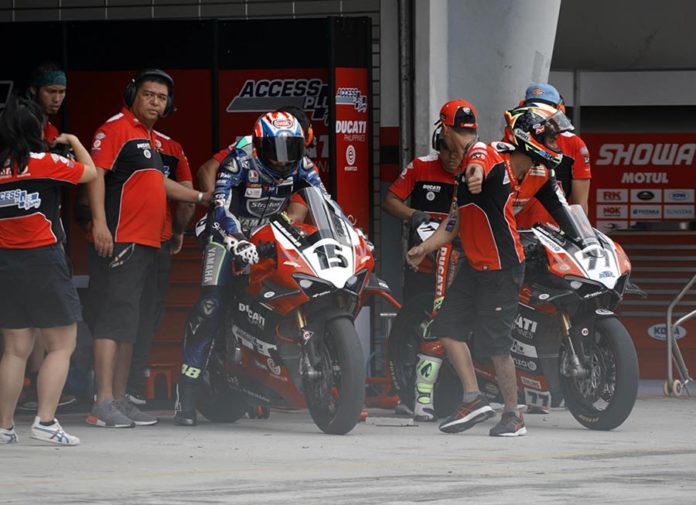 There has been a slight change in Access Plus Racing-Ducati Philippines-Essenza’s lineup ahead of the Asia Road Racing Championship’s (ARRC) season finale this weekend. In a bid to end the year on a high, they’ve decided to bring back wildcard entry Federico Sandi and help series regular Timothy Joseph “TJ” Alberto bring back strong results from the Chang International Circuit.

As the lone Filipino rider on the ASB1000’s grid, Alberto has impressed on every outing so far and showed improvements as the year progressed. A season’s best 6th place finish at Sepang followed by a string of top 10 results highlighted his debut year in the ARRC, which he hopes to improve on during the team’s visit to Thailand.

Alberto has also been busy preparing for the final race of the year, gaining valuable experience by competing in the BRIC Superbike Championship a few weeks ago.

Meanwhile, Federico Sandi is back for his second wildcard appearance in the ARRC. The Italian rider was able to show the Panigale V4R’s full potential during the championship’s penultimate event in Malaysia and even scored the team’s best result all season. With his wealth of experience, Sandi will once again assist the team in extracting every inch of performance from their pair of Ducatis with hopes of landing on the podium.

After six action-filled rounds, the Asia Asia Road Racing Championship is set to conclude its 2019 season November 29 to December 1 at the Chang International Circuit in Thailand.

TJ Alberto, #77 Ducati: “As always I’ve been working hard on my training. We were also in Thailand last week to do some testing and practice leading up to this race. Am now looking forward to push my Panigale V4R to the best that I can do. I feel quite prepared for the last weekend in ASB1000 and hoping to get good results for the team and begin work for the 2020 season.”

Federico Sandi, #15 Ducati: “I’m very excited to come to Thailand and hope to be fast right away. I’ve never ridden on this circuit, but I’m positive that we can be quicker than the previous event in Malaysia. Like before, my goal is to help the team improve the bike setup and deliver good results. We are strong and I know we can go faster. I hope TJ and I can end the year well and looking forward to the weekend.”

Toti Alberto, Team Principal: “It’s been quite a journey so far. Of course we’ve had some ups and downs, but I’m happy with what we’ve achieved in 2019. We’re one of the newest teams on the grid and over the span of six rounds, Access Plus Racing with our partners Ducati Philippines and Essenza have grown so much to compete on the same level as the other pro outfits. It’s just unfortunate that our results have been limited by one of our riders Jonathan Serrapica. So for the season finale, we’ve again signed Sandi to bring us to the front of the pack like he did in Sepang. Together with TJ, am looking forward to end the year on a high note with strong results in Thailand.”