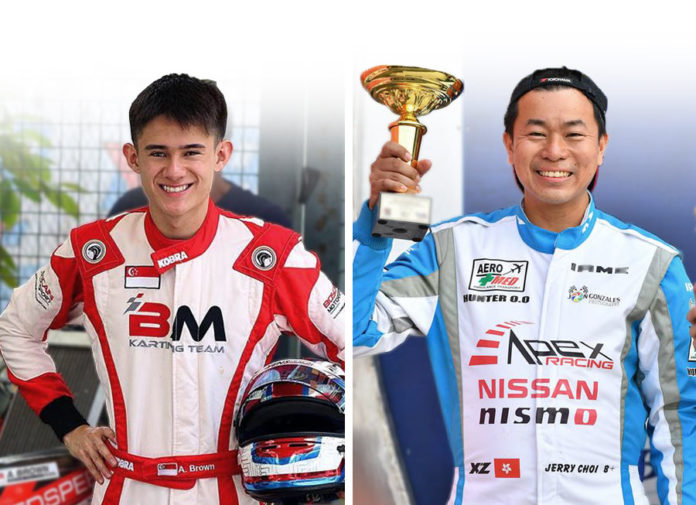 The upcoming 2019 Giti-Formula V1 Challenge is really starting to shape up with 2 new drivers confirming their entry. Graduating from go karts, Alex Brown and Jerry Choi are set to compete in the full 4-round season, vye for the overall title, and claim the top prize to race at Suzuka Circuit in Japan.

Alex Brown is Filipino-Singaporean driver who began his career in karting at the age of 8. Now at 16, he already has 4 championships titles under his belt winning the Cadet Singapore back-to-back in ’13 and ’14, Junior X30 Malaysia in ’16, and most recently the Junior X30 Southeast Asia in ’17. His endeavors has also seen him race around the world at tracks in Singapore, Malaysia, Sri Lanka, Taiwan, Macau, Belgium, France, Spain, Italy, and the UK.

Brown is finally making the move to Formula V1 this year as the next step up the motorsports ladder.

Jerry Choi, on the other hand, is a veteran karter who has been racing since 2010. The 47-year-old clinched both the AAP’s Driver of the Year for Karting the Golden Wheel Award’s Karter of the Year in 2016 and is now looking for a new challenge in single seaters.

Alex Brown: “My goal is to transition to cars in preparation for any racing series in the future. Hopefully one day I can achieve my goal and race in the World Endurance Championship. I have heard very good feedback about Formula V1 and its organizer Tuason Racing therefore I am very excited for this season.”

Jerry Choi: “The main reason I joined Formula V1 is that I would like to climb up the next peak in motorsports. More importantly, I want to learn something different from karting. Most of the racers are looking for new challenges, I am one of those too.”

JP Tuason, Tuason Racing President: “We are very happy to see people leveling up and moving forward in their motorsports career. For us this is the importance of the Formula V1. It provides future racing champions a platform to hone their talent and be competitive.”