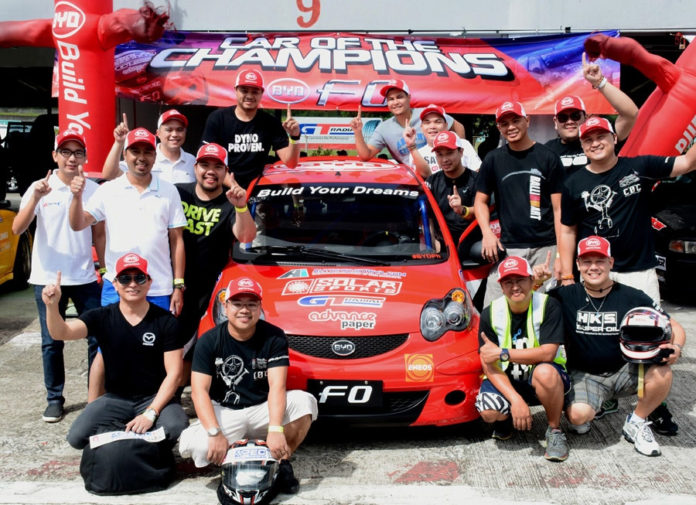 The Challenge of Champions (COC) is where all the previous Bracket and Grid champs of Circuit Showdown are pitted against each other for the ultimate super lap battle. And the chosen spec car for 2014 is none other than the BYD F0.

Organized by the newly-formed Flat Out Race Series (FORS), each of the 14 drivers invited to participate in this year’s COC was only given 1 hot lap to set the fastest time in an otherwise unfamiliar car. This evens out the playing field and puts more importance on outright driver skill (rather than mechanical performance) to win the race. But in a world heavily dominated by Hondas, Mitsubishis, and Toyotas, it’s hard to find a potent machine that none of the competitors have ever driven.

That’s where the BYD F0 comes into play.

Earlier this year, BYD Philippines decided to put up their own factory-backed racing team for the Philippine Micro Series (PMS). There, they built a race car based on the F0, tuned the suspension, fitted all the necessary safety hardware, but left the 1.0L 3-cylinder engine mostly stock.

Despite its measly 68 hp, it was still able to consistently finish on the podium at the hands of Keith Bryan Haw. But more importantly, no one else has ever driven the F0 race car except for Keith, which makes it the perfect spec car for the 2014 COC, which was held last December 6 at the Batangas Racing Circuit (BRC).

After all the 14 drivers had a go at the BYD F0 race car, it was 2013 Bracket D Champion Al Jeffrey Lacambra who topped the time sheet with a fastest lap of 2:13.458. This was impressive feat considering that BYD’s own factory driver only ever managed a 2:13.550 during his stint in the Micro Series.

Thomann, who is also one of the organizers of FORS, commented: “BYD’s support has been incredible. Imagine providing us with the car for the champions to use – 14 champions using one car and it never really flinched. The performance was really incredible, it never changed. Lap times kept going down, meaning that the car was getting better as it went along. We’re really very thankful that BYD has taken the initiative in helping us.”