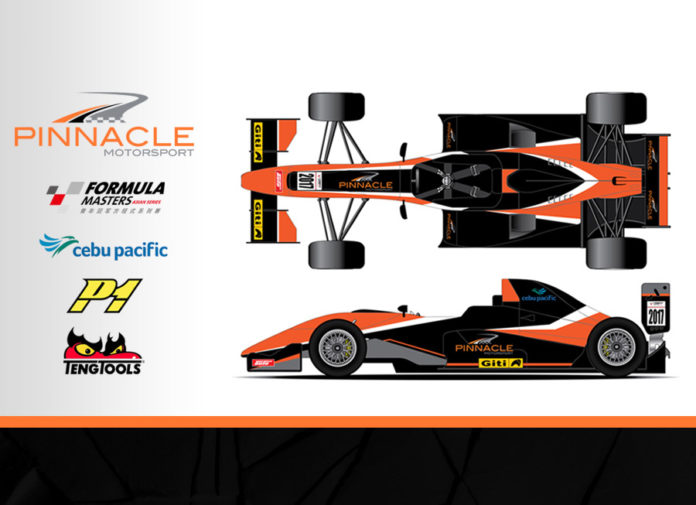 Does the name Pinnacle Motorsport sound familiar? It should. These are the same people who raced under the banner PRT Racing last year. Except now, they have a new name, new logo, new livery, and new driver lineup for the upcoming Formula Masters Series (FMS).

The squad made its FMS debut last year, donning a white/orange livery. They managed to score 3 wins, 5 podium finishes, and 2nd in overall championship, which is quite a feat for a rookie team. In 2017, they’re hoping to do even better starting with the season opener this April 7/9 at the Sepang International Circuit.

Like most drivers Taylor started his motorsport career in karting, before moving up to single seaters. The New Zealander competed in the NZ Formula First Championship, Formula Ford, then in the Toyota Racing Series where he finished 7th overall last year. Meanwhile, Antolin from Spain is the team’s youngest driver at 16. He brings with him experience testing in Formula 3 as well as racing in the F4 Spanish and Italian F4 Championships.

Then there’s Ben. At only 19 years, he already has multiple karting wins under his name such as the 2013 Rotax Junior Thailand Championship. He also competed in the Vios Cup and joined a 2-day test in Formula 4 SEA during 2016. Now, he will finally graduate into single-seaters, a Filipino-British driver racing for Philippine team.

Taylor Cockerton: “I’m exited to taking on Formula Masters Series with Cebu Pacific Air by Pinnacle Motorsport. I know it’s going to be a big challenge driving a new car on unfamiliar tracks, but I am sure the team will give me the resources capable of challenging for the title. Together with my teammates, I’m looking forward to bring them success this year.”

Antolin Gonzalez: “This will be my first time racing in Asia and I’m glad to have a strong team behind me. We made good progress during pre-season testing, familiarizing myself with the new car around Sepang, and I believe we can do well this weekend.”

Ben Grimes: “I’m incredibly grateful to race with an outfit as professional as Cebu Pacific Air by Pinnacle Motorsport on my Formula Masters debut. The team and I worked hard in testing to have a strong start this season. I hope to secure strong finishes to help the team claim the title in 2017.”