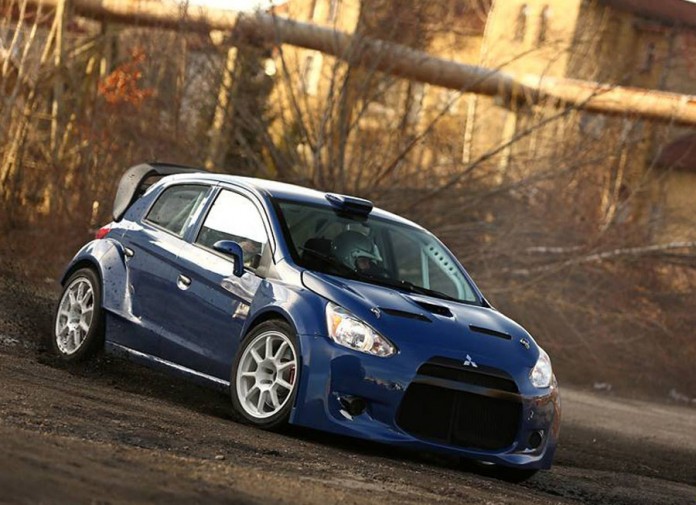 News about an Evo X-powered Mirage rally car is nothing new. Ralliart Sweden developed one last year, which you can now buy if you want to compete in WRC 2. But unlike the Swedes, who spent months in RnD, Dytko Sport from Poland built theirs in just under 2 weeks.

As far as the story goes, Paul Dytko was set to compete in the 50th Barbórka Rally in Warsaw, Poland last December 2014 with another prototype. But as luck would have it, his Peugeot 208 rally car failed to make it in time for the rally. So, Paul did what any mad tuner would do, build a brand new one from scratch and go racing.

What you see here is the lovechild of an Evo X and a Mirage (otherwise known as a ‘Space Star’ in Poland), put together by Paul and his talented team of technicians in a matter of 1.5 weeks.

The 4B11 engine, suspension, and 4WD drivetrain were all borrowed from a Group N Mitsubishi Evolution X rally car. The Mirage’s chassis was then modified to fit the new drive unit, while a safety cage kept everything secured where they’re supposed to be. The 5-speed sequential box came from Samsonas, sport dampers from Reiger, clutch and exhaust from Ralliart, and brakes are from Brembo.

Unlike the Ralliart Sweden Mirage R5, this so-called ‘Space Star Proto’ from Dytko Sport isn’t homologated by the FIA… or at least not yet. That means you can’t race it in official WRC events. But no one is stopping you from competing in other rallies that would otherwise allow you to run a 2.0L turbocharged 4WD supermini.

If you want one, Dytko Sport is now selling this mad little rally car for €39,000 (or about P2.097 million), which comes out cheaper than a brand new Evo X. Do note however that it takes them between 6 to 7 weeks to put it together from scratch on a regular timeframe. But we’re sure they can meet a 1.5 week deadline if you need your rally car ASAP.