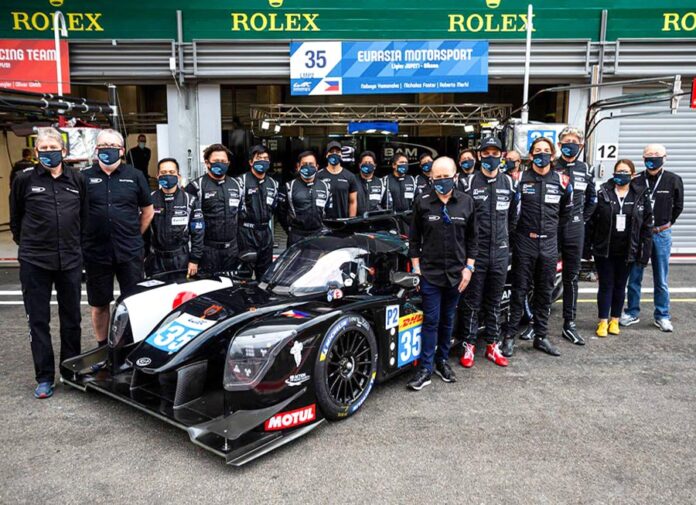 Now on their fourth attempt, Eurasia Motorsport will once again be lone Philippine flag carrier at the 24 Hours of Le Mans. So be on the lookout for the team’s all-black-livered #35 Ligier JS P217 Gibson during the 88th running of the French endurance classic this coming September 19/20.

The team entered the 6 Hours of Spa Francorchamps a few weeks ago as a ‘shakedown’ ahead of the twice-round-the-clock race. It was their chance to put the car, team, and drivers through their paces as it has been almost half a year since they last saw the track in February. Although Eurasia Motorsport ‘only’ managed 8th in LMP2 and 28th overall, getting all the team’s equipment and personnel (not to mention their Filipino mechanics) flown into Europe amidst the COVID-19 pandemic was already an achievement in itself.

But while the team’s #35 entry in LMP2 is confirmed to fly the Philippine flag, sadly none of their drivers will. Well, what’s new?

As confirmed earlier this year, Japanese driver Nobuya Yamanaka will be heading the team’s lineup. He competed with Eurasia Motorsport for the past 2 seasons, gaining experience in LMP3 and LMP2 in preparation for his Le Mans 24 Hours debut.

Shane van Gisbergen and Daniel Gaunt, however, have been swapped for past Eurasia Motorsport drivers Nick Foster and Roberto Merhi. The pair have raced with the team during the 19/20 Asian Le Mans Series, but not together in the same car. Foster, still fresh from Berlin competing in the Jaguar I-PACE eTrophy, was the Australian Porsche Carrera Cup Champion in ’15 before stepping up to GTE Am in the WEC. He also has stints in the Blancpain GT Series Asia, Intercontinental GT Challenge. Merhi, on the other hand, drove for the Manor Marussia F1 Team in ’15 then switched to endurance racing where he entered the 24 Hours of Le Mans in ’16.

Mark Goddard, Eurasia Motorsport Team Principal: “We achieved all we expected with this tough test in Spa. The crew got the opportunity to work in a competitive environment for the first time in a while. They also worked well under pressure, changing conditions and completed some running repairs. The drivers – especially Yamanaka – got the valuable experience that will be of great benefit when he lines up at Le Mans next month.”

This will be the Philippine-based team’s fourth attempt at the 24 Hours of Le Mans. Eurasia Motorsport secured 9th overall and 5th in LMP2 during their debut in 2016. They then returned in 2017 to cross the line 13th in class, but ran into trouble a year later and was unable to take the chequered flag. Although the team was on the reserve list in 2019, they did not compete. Fingers crossed, we’ll see the Philippine flag on the podium in 2020.