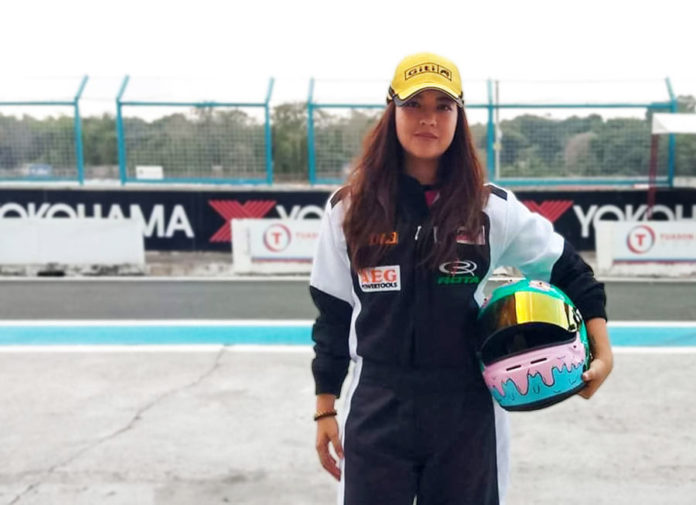 Except for some one-off appearances in local endurance events, it must have been at least half a decade since Gaby Dela Merced last raced full-time. But this year is going to be different. This year she’s finally back in the sport she loves most competing in TA2 Asia Racing.

Trans-Am, or otherwise known as TA2, is a spec racing series where teams runs identical space-frame muscle cars. All are powered by the same 6.2L V8 with around 525 hp, equipped with same 6-speed sequential gearboxes with paddle shifts, and roll on same racing slicks. This formula allows everyone to be competitive and have an equal opportunity to win, which something Gaby intends on doing.

Her ride in this year’s 5-round championship is a yellow-livered Ford Mustang run by Tecpro Idemitsu Racing. This will take her around Asia which starts this weekend in Malaysia. She then follows the series as it moves to Thailand visiting the Bangsaen Street Circuit, Bira Circuit, and finally the Buriram International Circuit for the season finale in October.

Rule changes introduced for 2019 will also see Gaby share the Tecpro Idemitsu Racing Ford Mustang as mid-race driver changes are now mandatory. That role is being filled by Jaylyn Robotham from Australia who at only 16 years of age managed to finish 5th overall in their local Toyota 86 Racing Series last year.

With TA2 Asia’s 2-driver setup, it’s important that both Gaby and Jaylyn learn to work together and find a balance if they want to fight for victories. Of course, pitstops could also throw in a few surprises along the way.

Backed by SND, the part-time model, TV presenter, and art gallery owner will be the first female driver in TA2 Asia Racing when the 2019 season kicks off this April 19/21 at the at the Sepang International Circuit. However, she won’t be the only Filipino driver on the grid as Don Pastor is also running in the series with his own entry.

Gaby Dela Merced: “I’ve been wanting to race a full season for quite sometime now since my last was way back in 2013. I love the car and it’s so much fun to drive. I didn’t expect to end up racing in 2 championships this year. It’s quite daunting on paper, but I’m very fortunate to have these opportunities and I’m always up for a challenge! I have SND to thank the most. I wouldn’t be competing this year it weren’t for them. Also to my former team in Formula Toyota for trusting me enough to drive for them in Formula V1 racing under Standard Insurance M1 Racing.”

Gaby Dela Merced is supported by SND, Usana, and Vinyl on Vinyl on her TA2 Series Asia campaign this 2019.