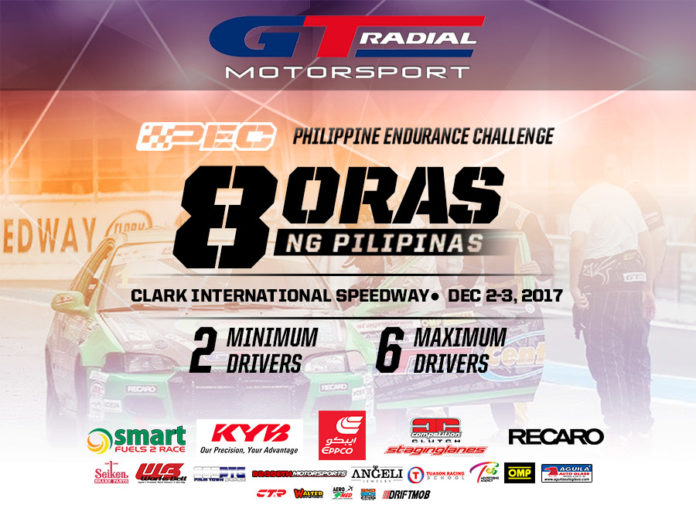 When the GT Radial x 8 Oras ng Pilipinas gets the green light this December, it will feature the biggest grid in the Philippine Endurance Challenge’s (PEC) history. Because as of today, 31 teams out of the 35 available slots have already confirmed their entry for the 2017 race.

Dissecting through the digits, there will be 11 cars in the RP Class, 8 in FM-1, and 14 in FM-2. The RP Class is for full-blown race cars and are usually the fastest of the group. FM-1 and FM-2 on the other hand are for slightly modified street cars, divided according to horsepower. Missing from this year’s list is the Manufacturer’s Cup for stock vehicles where no entries have been received… yet.

(Do the math and you’ll notice that the numbers don’t quite add up. That’s because several teams are competing in multiple categories.)

Although the BMW AutoPerformance M3 is down in FM-1, don’t forget that this team crossed the finish line 1st during the GT Radial x 4 Oras ng Pilipinas in June. You never know what surprise they’ll have in store.

We’re also keeping our eye on is the #6 Formula V1. This wildcard entry from Vita Prototype is easily the quickest car over a single lap and is the only one in the field without a roof. Let’s just see how fast it can run racing 8 hours non-stop.

The GT Radial x 8 Oras ng Pilipinas will take place on December 2 to 3, 2017 at the Clark International Speedway (CIS). Practice will be on Saturday while the race will begin at 8:30 AM on Sunday.