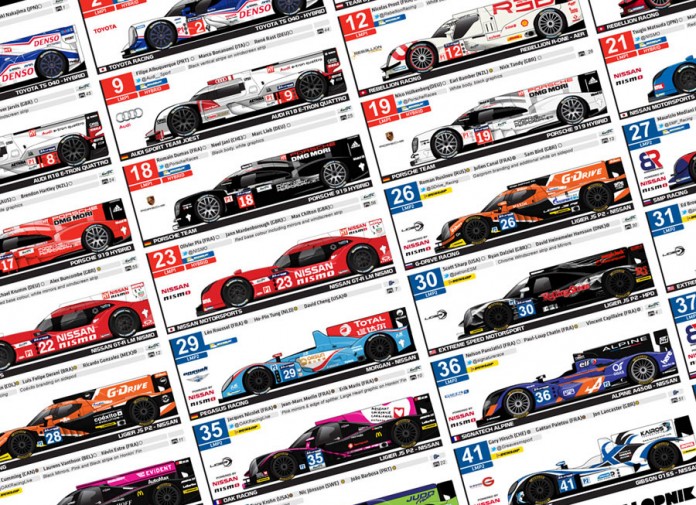 That’s where Andy Blackmore of SpotterGuides.com comes in.

As far as anyone could remember, Andy has been designing race car liveries as a profession. In his free time, he creates Spotter guides for Formula 1, DTM, and Le Mans to help regular guys like you and me follow the action on track. And this is his latest artwork.

The ‘NISMO Spotter Guide – 2015 24 Heures du Mans’ features all 56 entries and their matching unique liveries for this year’s race. It includes details such as Race Number and Class, Driver and Nationality, Team Name and Nationality, and Chassis and Engine combo. Andy even went as far as to include the Teams’ official Twitter handle so you can follow them as the race goes on.

As it’s sponsored by NISMO, the last page contains a detailed infographic about the Nissan GT-R LM NISMO and its drivers, and which of the 19 LMP2 contenders are powered by Nissan engines.

And if you’re following LMP2, we’re putting all our money on the No. 47 KCMG Oreca 05-Nissan that qualified on pole in class and 14th overall.