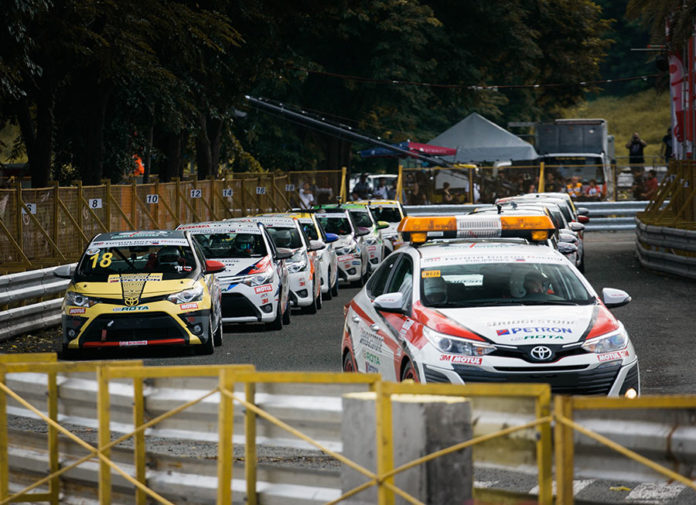 Last time the Vios Cup raced at the Manila South Circuit was in 2016. Back then, we got more “waku-doki” action than we bargained for with cars crashing left and right, and broken parts filling every inch of the track. Thankfully all 49 drivers were at their best behavior when Toyota’s one-make-series returned to Alabang last July 28/29.

1.5x points were up for grabs for the Top 10 finishers during the second event of 2018. This allowed competitors to either extend their lead or make up lost ground in the championship.

Keith Bryan Haw and Estefano Rivera now lockout the top 2 spots in the Super Sporting Class for Team Obengers. Dominic Ochoa moves up to 3rd overall despite scoring 0 points in Race 5. But it was a big blow for Gerard Loy of Team Biskeg. He came to Alabang with the championship lead, but now sits in 4th after a difficult weekend.

Vincent Courcol of AP Corse / Toyota Makati barely holds onto his lead in the ROTA Promotional Class with Elysse Menorca of Team Obengers hot on his heels. The Nissan GT Academy finalist and lady driver is only 5 points away from Courcol as the championship heads back to the Clark International Speedway (CIS) on September 21/22.

It’s a similar story in the ROTA Celebrity Class. As long as no one pulls a surprise, expect Fabio Ide and Troy Monetro to settle the title next month.

Here’s how the driver standings stack up so far after Round 2.