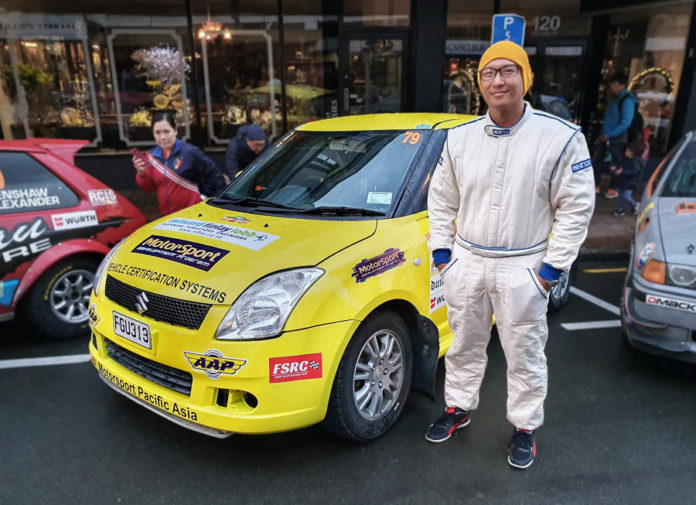 The newly-appointed AAP Motorsport Manager is taking a break from his regular day job to go back racing. Ivan Isada is in New Zealand this weekend for another shot at the 2019 International Otago Rally, settling some unfinished business he had from 12 months ago.

The event runs from April 13/14 covering 15 special stages with a total distance of 283.7 km. A record-breaking 132-car field is expected to line up at the starting gate on Saturday, which also serves as the opening round of the New Zealand Rally Championship (NZRC) and Asia Pacific Rally Championship (APRC). Ivan, in particular, is entered in the ‘Allcomers Rally’ B division where he’ll go up against 13 other competitors in the same yellow Suzuki Swift Sport he used at last year’s event.

Sadly, he and co-driver Art Guevara came to a dead stop 25 km from the finish line in 2018 due to a gearbox failure. This time though, the crew has changed several things on the #79 machine to help it get to the rally end. It just breaks our heart that Art won’t be there when it happens as he’s unable to accompany Ivan this year. In his place is local man Dean Schroder who’s signed up for the post navigating for the lone Philippine entry in the entire Otago Rally.

Ivan Isada: “I’m once again running as a privateer, supported by a few friends who are just as passionate about the sport as I am. I intend to make it to the finish line this time around and gain experience. Hopefully I could quickly pick up some lessons from my co-driver Dean Schroder with his local knowledge and gain some time on the stages. Once again, thank you to AAP for the assistance and my family and friends for the support.”