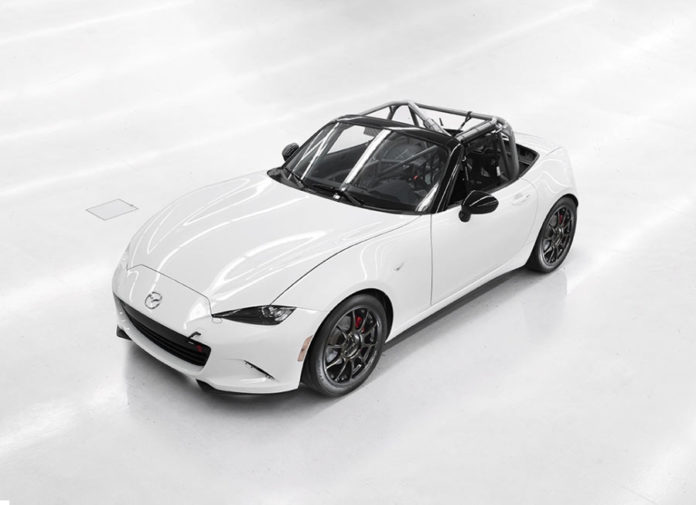 The secret’s out! Someone, somewhere is putting together a local Mazda MX-5 one-make series. It’s said to be based around the latest ND2 model, fitted with parts supplied by CUSCO Japan. And if everything goes as planned, will run a full season this 2019 called the ‘MX-5 Spec Series’.

While we can’t tell you who’s behind it yet, what we can confirm is that it’s supported by the brand’s Philippine distributor. The spec chassis won’t be based on the MX-5 Global Cup and will instead be built around a production-based soft top MX-5. All will then be upgraded with CUSCO sport dampers, CUSCO sway bars, a bucket seat for the driver, and safety belts amongst other bits to make them fit for racing. We were also told that the bolt-on roll cage can be used with the roof on or off.

As the series will be running the new MX-5 ND2, the cars will come equipped with the latest 2.0L SkyActiv engine that packs 181 hp and a rev limit that cuts out at 7,500 rpm. The 6-speed manual transmission, however, will be standard equipment so anyone who intends to join must know how to drive stick.

What’s nice about the MX-5 Spec Series is that the cars will be sold and delivered with all the original parts included. This way, owners can still drive them on the street or return them back-to-stock when they’re not racing.

So, what’s the damage? We were told that an MX-5 Spec Series car fetches for Php 2.5-million each, which is only around Php 620,000 more than the standard showroom-stock model. That also pays for a race suit, shoes, gloves, and entry fee to the series for the first year. All you have to supply on your to go racing own is a crash helmet, race livery, and a crew.

Although the MX-5 Spec Series’ 2019 race calendar has yet to be confirmed, they plan to hold between 4 to 6 rounds this year with races lasting between 10 to 12 laps. Whoever wins the overall championship then gets to fly to Japan and race in the local MX-5 championship overseas.

Not bad, right? If you want to sign up, shoot us an email at info@timeattackmanila.com and we’ll get you in touch with the right people. But you do have to hurry as there are only 15 cars available with the season set to begin sometime in April or May.