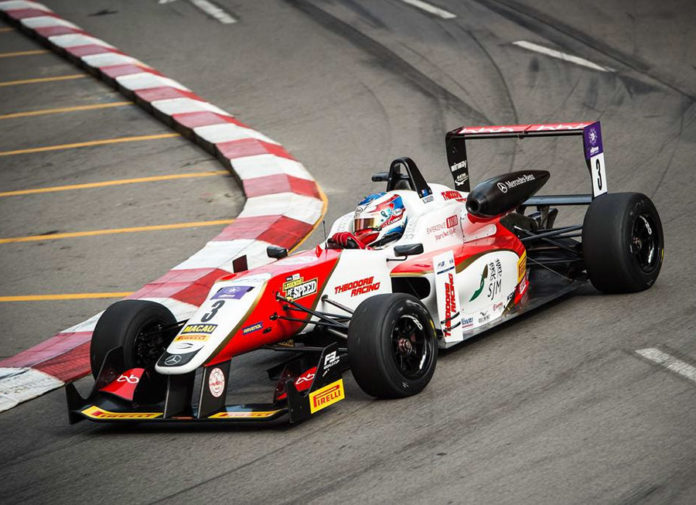 If we were to follow the team’s press release, we would have told you that SJM Theodore Racing by Prema is entering 4 cars at the 64th Macau Grand Prix. And that they’re aiming to secure their record 9th victory on the 6.2 km Guia Circuit this coming November 16/19. But that’s not what caught our attention.

What we’re really keeping an eye on is their #10 car that will bear the name M. Schumacher.

Mick Schumacher, son of 7-time Formula 1 world champion Michael, is scheduled to make his Macau GP debut this month. The 18-year-old driver has steadily moved up the motorsport ladder, competing recently in the ADAC and Italian Formula 4 Championship in ’16 and now in the FIA European F3 Championship.

Although we don’t want pressure the young German, it would be nice if he were to follow in the footsteps of his father who won in ’90 and his uncle Ralph in ’95. Am I right?

Good. No sweat then.

As for the other entires of SJM Theodore Racing, cars #7, #8, and #9 will be driven by Maximilian Günther, Callum Ilott, and Zhou Guan Yu. Günther ended this year’s FIA F3 Championship 3rd overall and will be returning to Macau for the second time running. Ilott was 4th while Zhou completed the same series in 8th, both having been recently signed as Ferrari Academy Drivers.

With a driver lineup like that, we guess there’s no shortage in talent in SJM Theodore Racing’s camp for this year’s Macau GP.

Mr. Teddy Yip Jr., Theodore Racing Team Principal: “It has already been a season for the team, securing the Teams’ title in the FIA Formula 3 European Championship, and we are delighted to confirm the same impressive driver line-up for our assault on the 64th Macau Grand Prix. We are especially pleased to continue our very successful partnership with SJM as our loyal title sponsor, and we believe we have every opportunity to deliver another Macau GP victory.”