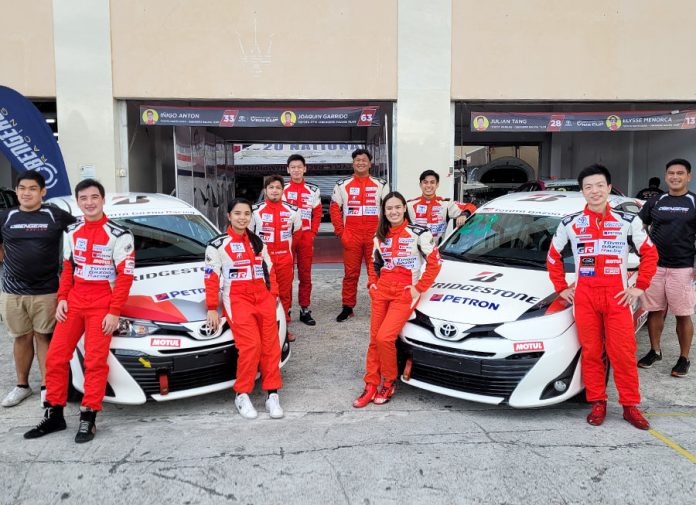 One of the most successful teams in the Toyota GAZOO Racing Vios Cup is marking the return of Philippine motorsports with a vengeance. Obengers Racing, who have won 2 out of the last 6 overall championships, is fielding not just the biggest but also the strongest lineup for the 2021 season with 8 very potent drivers all vying for their respective class titles.

Super Sporting Class
Leading the way for the team is Estefano Rivera who’s making a comeback to Toyota Motor Philippines’ (TMP) one-make-series after missing out on the titles in ’15 and ’16. Although he stepped away from the series after those attempts, he has always stayed close to Obengers Racing and together won the Giti-Formula V1 Championship in ’19. This time though, he won’t be settling for second best.

With him in the top-tier class is Marc Soong again flying the colors of the ‘Make-A-Wish-Foundation’. This will be his fourth season with Obengers Racing, steadily finding improvements every year.

Sporting Class
Obengers Racing will have the biggest entry list in the Sporting Class by far with their drivers taking 5 out of the 7 slots on the grid. They’ve moved both Julian Tang and Elysse Menorca up from the Promotional Class after the pair finished 2nd and 3rd, respectively in the championship last time around.

They will then be joined by the team’s new recruits Iñigo Anton, Christopher ‘Wakkeen” Garrido’, and Miguel Quiñones. Though still in their teens, the trio are already well-accomplished drivers in their own right. Iñigo takes after his multi-titled father Carlos Anton and has several endurance, slalom, and eSport titles under his name. Wakkeen, on the other hand, has been busy collecting championships in karting over the last 6 years and will finally make his touring car debut in the Vios OMR. Likewise, Miguel Quiñones has had a similar journey in karts and became Junior Karter of the Year at one point. After taking part in several tests with Formula 4 SEA, Formula V1, and Radical Sportscars, he has now made the right choice to enter in the Vios Cup with Obengers Racing.

Promotional Class
Julia Delos Angeles is no stranger to the series competing in the ’17 and ’18 seasons. This time though she’s back with a fresh outlook and a new team that could take her to the championship. She will be Obengers Racing’s lone entry in the Promotional Class with hopes to repeating class title win of ’19 with Quattro Adriano.

Pao Agregado, Team Manager: “The team’s goal is really to nurture and develop drivers for Philippine motorsports. With the driver development program of Obengers Racing we’ve centered the team around finding young talent and we’re happy with what we saw with from our new drivers Wakkeen, Iñigo, Miggy, and Julia. We have a very positive outlook and even the pandemic cannot stop motorsports.”

Cosco Oben, Obengers Team Owner: “We’re very excited to be back racing after more than a year due to the pandemic. I see this as a good sign of better days ahead for the racing community and more importantly our industry and Toyota. We will be fielding our biggest roster of drivers in our racing history composed of 8 young talented and driven racers. I can’t wait to see them all on the podium this weekend. Of course putting up this big team during this challenging time wouldnt be possible without the help and support of our team co-principal Richie Uy, manager Pao Agregado, coach Roland Hermoso and our ever supportive sponsors who’s been behind us since day one.”