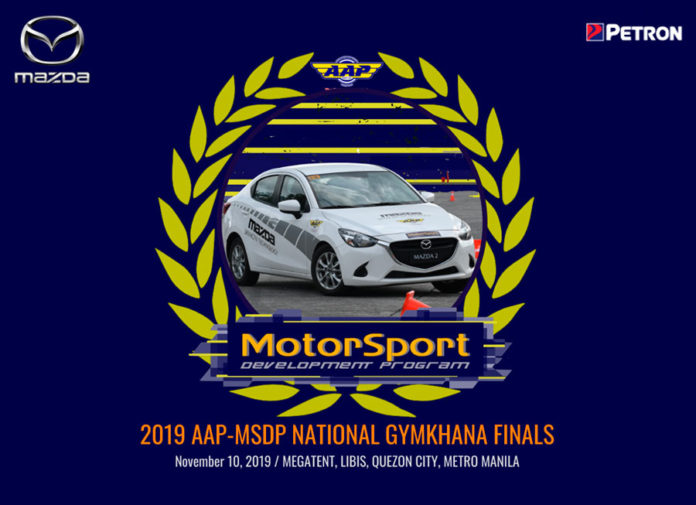 Now going on its 3rd year, the best drivers from the the AAP’s Motorsport Development Program (MSDP) will once again come together for the annual ‘champion of champions’ event at the 2019 National Gymkhana Finals. This will see regional representatives from Cagayan De Oro, Iloilo, Davao, Cebu, Zamboanga, and Metro Manila battle it out for the overall prize this weekend in identical Mazda 2 SkyActiv race cars.

The MSDP selected 5 category champion drivers from each city where a National Gymkhana Series was successfully held. Except for Metro Manila where the series is still on-going, here are the list of finalists who will compete this November 10 at the Megatent Libis, Quezon City.

Drivers to watch out for this year are the boys from Cagayan De Oro headed by Dodot Montaner, Kent Lignes, and Bryco Maglasang. Unfortunately, last year’s top qualifier Mark Bernales, who won the recent Asia Auto Gymkhana Championship (AAGC) in Korea, won’t be able to join his fellow Kagayanons as he’s been called up again to represent the country for the upcoming AAGC event in Taiwan.

Meanwhile, Iloilo has been strengthening the development of their gymkhana drivers. Ian Rosales, who was the 2nd top qualifier last year, has proven to be a quick driver with his stints in the First Step Racing Cup. He will be joined by National Finals returnee Jun Española and newcomers Isko Maravilla, Mike Hatamosa, and lady driver Ann Iran.

Davao will send 5 representatives. This includes young guns William Harvey Evangelista and Lawrence Calvo who impressed with their strong performances in several MSDP rounds in Mindanao. Veteran autocross drivers Angelo Ngoho and Hervie Jao, alongside rookie Dr. Carlo Joaquin will also be part of their lineup.

Cebu’s most experienced driver in the MSDP Gymkhana Finals is also their youngest, 12-year-old karter Seven Aleman. He will be joined by Ken Cinco, Mike Hatamosa, and the very fast Dennis Corro.

Zamboanga, which happens to be the newest region to join the finals, will be represented by lead drivers Nico Uro and Kim Basilio with Emir Musalin and Welan Alcavas completing the roster.

Lastly, Metro Manila’s VJB and Powee Base are the only entries confirmed for the National Finals so far. The rest will be decided during the Regional Finals on November 9. 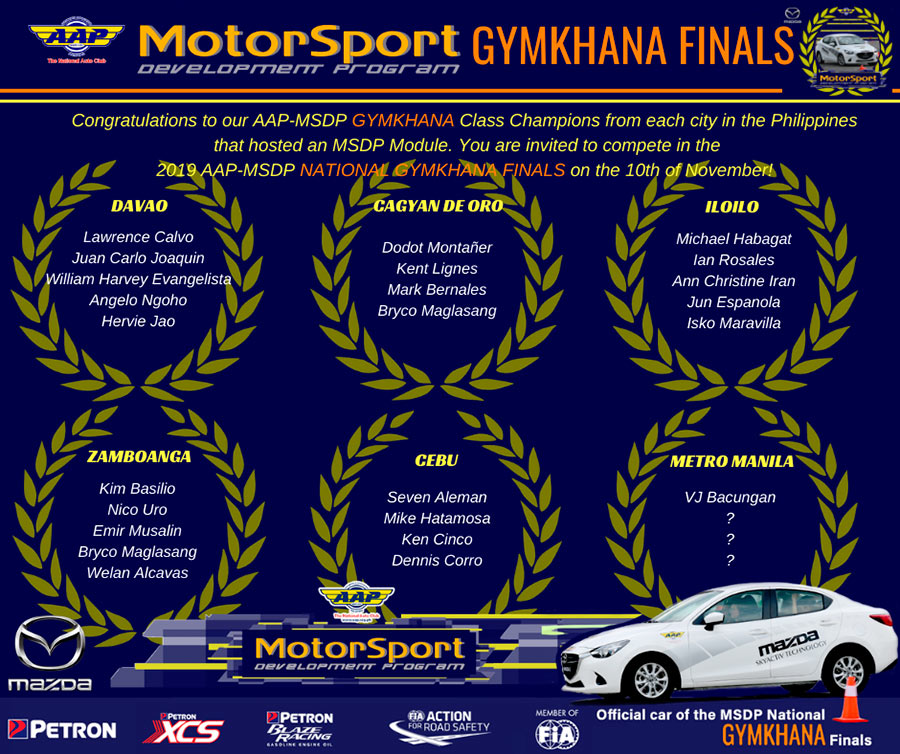 “We are thrilled to host another year of the MSDP National Finals after a long year of holding regional events and evaluating new and emerging talent from all over the Philippines,” said Ivan Isada, AAP Motorsport Manager. “We aim to give Filipino racers a possible path in motorsport via the MSDP Modules and Gymkhana events held nationwide. We also want to provide them a venue where they can measure their skills against the best in the country.”

The overall winner of the 2019 AAP-MSDP National Gymkhana Finals will become part of the pool of drivers that represents the country in international races such as the Asia Auto Gymkhana Competition (AAGC). Meanwhile, the top 6 will be invited to compete as part of the Mazda Philippines-MSDP entry in an 8 Hour Endurance Race later this year.