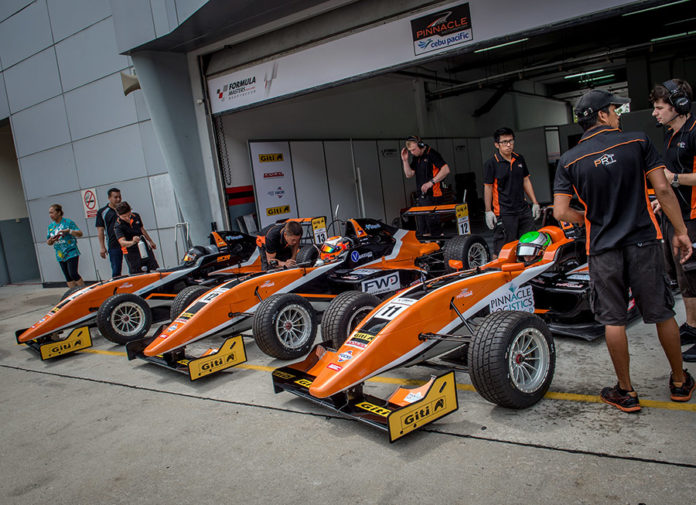 The last time Pinnacle Motorsport visited the Sepang International Circuit (SIC), they managed pole position in qualifying, 2 podium finishes, and a race win over a weekend. That was last month during the opening round of the Formula Masters Series. Now, they’re back in Malaysia to hunt for more podium runs (and 1st place finishes) this coming May 5/7.

It’s still going to be the same driver line up for the Philippine-licensed team. There’s Taylor Cockerton from New Zealand, Antolin Gonzalez who comes all the way from Spain just to compete in the junior single-seater series, and most important of all at least to us, Ben Grimes from the Philippines.

There will be 3 x 25 minute races and 1 x 15 minute race over the course of the weekend. Hopefully the trio will be able to repeat their success from the previous event or do even better.

As far as championship standings go, Taylor is 3rd in the Drivers’ Classification, Antolin is in 6th, while Ben is in 7th. Pinnacle Motorsport, on other hand, is 2nd in the Team Championship.

Taylor Cockerton: “I’m super exited for round two of the Formula Masters Series at Sepang. We had a strong start to the season last month with good pace and lots of points. Since then, I have been thinking on what I need to improve in order to get better. My main target this weekend is to win but we’ll see how the weekend plays out.”

Ben Grimes: “Now that I have experienced a full race weekend in Formula Masters, I’m hoping to build on the strong finishes I had at the first round and score more points for both the drivers’ and the teams’ championship. I’ll be pushing as hard as I can for a podium.”

Antolin Gonzalez: “I’ll be focusing on my race pace for this event, improving on my consistency and lap times around Sepang. Together with the team, we hope we can convert this into a top three finish and score valuable championship points.”