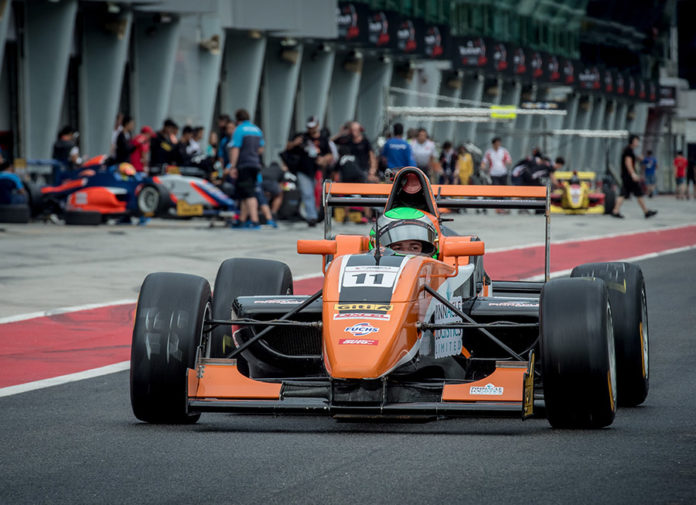 It’s going to be a big weekend for Pinnacle Motorsport. These guys will be at the Shanghai International Circuit this September 22/24 for the Formula Masters Series’ (FMS) season finale. But they’re not in it just for podium positions or race wins. The Philippine-licensed team will also be fighting for the 2017 Drivers’ Championship.

To be more specific, we’re referring to Taylor Cockerton. The 20-year-old from New Zealand currently sits 2nd in the classification and is only 16 points away from Daniel Lu of Absolute Racing. That’s 16 points he has to gain over 4 races on Saturday and Sunday.

While his teammate Ben Grimes will support Taylor’s title hunt, the Filipino driver also has his own goals for the weekend. After scoring a podium in Zhuhai, Ben now plans to cap his debut season in FMS with a Top 5 finish in the championship.

The 2 drivers will then be joined a new comer, Billy Zheng (Zheng Jia Nian) from China. Billy is a title contender in the 2017 China Formula 4 Championship and will make his first official outing in FMS with Pinnacle Motorsport.

Taylor Cockerton: “I’m excited to get underway this weekend for the final round of Formula Masters Series at Shanghai. It’s a long and complex circuit with some tricky corners, but I’m excited for the challenge. I will be putting everything on the line for the races in order to claim the title. This will be a big challenge, but I believe that I’m prepared to come away with the 2017 title.”

Ben Grimes: “Can’t believe how quickly my first season in FMS has flown by. Each race weekend I feel I’ve made progress personally, and we achieved a great result as a team in Zhuhai round with our first double podium of the year. Looking towards Shanghai, I’m hungry for a win. Hopefully we’ll conclude the championship as strongly as possible with a Top 5 position in the drivers’ championship.”

Billy Zheng (Zheng Jia Nian): “Really looking forward to my first race with Pinnacle Motorsport. I have good experience in Formula 4 China and Asian Formula Renault, so I hope I can do well when I move up to Formula Masters Series. It will be a very busy weekend with the top drivers fighting for the title. But my focus in on getting good results and help Taylor and Ben in the championship.”