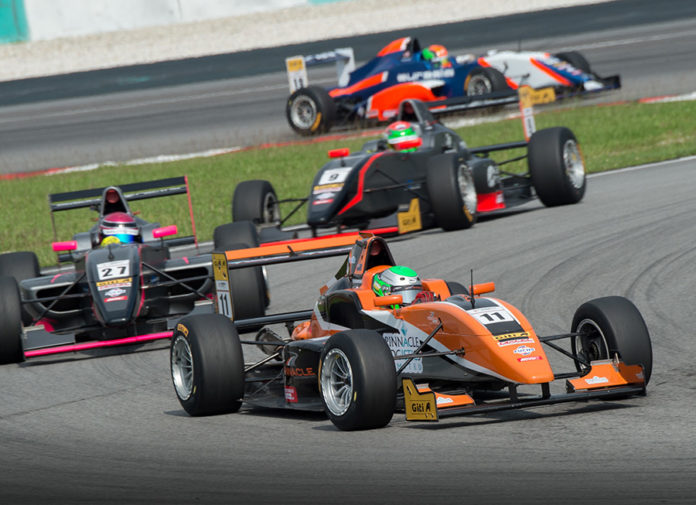 After hosting the first 2 events in Malaysia, the Formula Masters Series is moving to its next venue at the Zhuhai International Circuit for the 3rd round of the season. Flying with them will be Pinnacle Motorsport who resumes their hunt for more championship points, podiums, and trophies this June 16/18.

It’s still going to be Taylor Cockerton, Antolin Gonzalez, and Ben Grimes driving for the Philippine-licensed team. They’ve all performed quite well so far with Taylor heading the group.

The New Zealander collected a win and 5 podium finishes in the 2 outings at the Sepang International Circuit, putting him 4th in the Drivers’ Championship. Antolin’s consistency, with a best 4th place finish, earned him 8th spot overall while Ben made an impressive single-seater debut to be 10th in the standings. Altogether, this puts Pinnacle Motorsport 3rd in the Team Classification.

Obviously, the team hopes to carry its momentum as the series visits China. The thing is though, this will be Taylor, Antolin, and Ben’s very first competitive outing on the 4.3 km track, which adds to the challenge of the race weekend. But this should only be a small hurdle for the group of world-class drivers.

Taylor Cockerton: “I’m really looking forward to racing in Zhuhai. It’s going to be a new experience for me and I really hope I learn the track quickly, find good pace, and add to my growing list of podium finishes. The season has been going well so far and I’m still aiming for the title in Formula Masters.”

Ben Grimes: “I’m excited to race at a new track. There will be a different set of challenges that await and I’m looking forward to trying to get on top of them as best as I can. As always, I’ll be doing everything I can to bag a few podiums and score good points for the team championship to get Pinnacle Motorsport up the standings.”

Antolin Gonzalez: “We’re getting better and better at every event, learning new things, honing my skills, and improving my performance. I’m hoping to carry this momentum here in China and get good results for me and also for my teammates Taylor and Ben.”