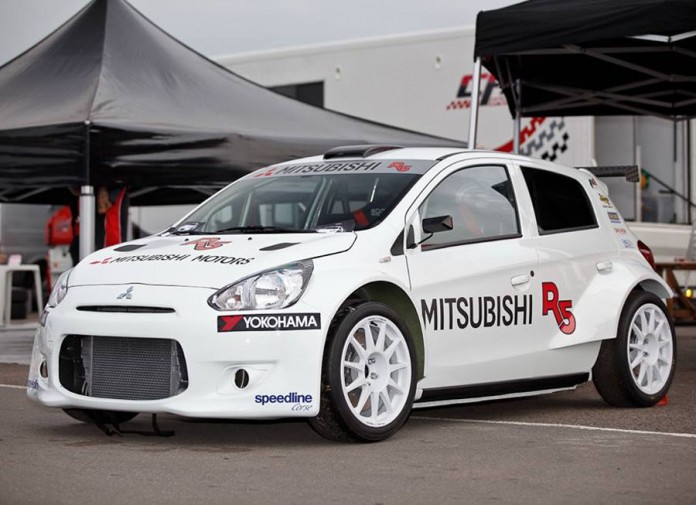 As far as we know, the Mirage is currently the cheapest and most economical Mitsubishi you could buy today. But the boys at Ralliart Sweden thought it would be fun to turn a 1.2L shopping cart into a full-fledged 280 hp 4-wheel-drive rally car.

Lets face it, running with the big boys in the World Rally Championship (WRC) ain’t cheap, which probably drove Mitsubishi away in the first place. So, the FIA formed Group R – a production-based championship that aims to reduce cost and get more entries into the WRC. And one of the classes under the new Group R regulations is R5 that will run in the new WRC 2 series (formerly known as S2000).

Technically known as the ‘Mitsubishi R5’, this rally car is loosely based on a road-going Mirage and was developed by Tomas Weng of Mpart AB (otherwise known as Ralliart Sweden). We say ‘loosely’ because they’ve pretty much swapped everything out except for the bare metal shell.

Taking the place of the standard 3-cylinder engine is a 1.6L version of Mitsubishi’s 4B11 engine that we’re more used to seeing under the hood of an Evolution X. And with a little tuning, they were able to get the numbers up to 280 hp and 450 Nm of torque.

It’s also fitted with a 5-speed Sadev transmission, 4-wheel-drive, 4-pot AP brakes, and MacPherson suspension on all corners with matching Öhlins dampers. Likewise, the increased track makes the Mitsubishi R5 stand 160 mm wider than a road-going Mirage and calls for much larger fenders.

This is the real deal, no doubt.

“A great deal of thought has gone into the design and development of this car,” said Weng. “We have kept it as simple and efficient as possible and have used as many Mitsubishi parts as we can. We are confident this will make the car straightforward to maintain and has enabled us to offer it at a competitive price.”

Mind you, this R5 project has been given the thumbs up by Mitsubishi and should hit the rally stages in time for the 2015 season.