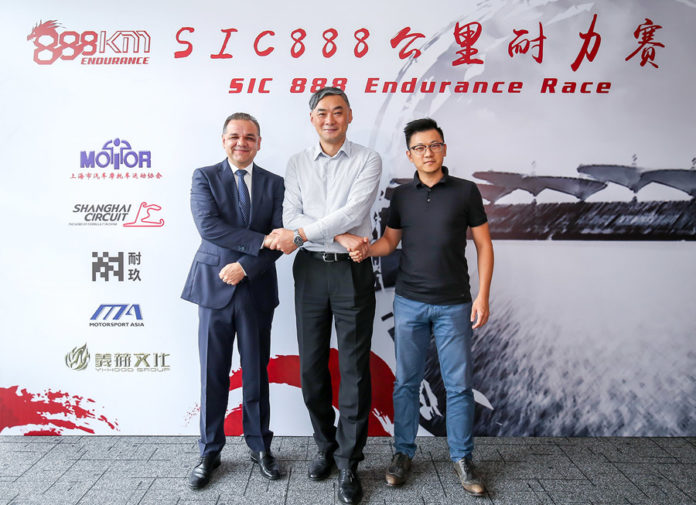 The Shanghai International Circuit (SIC) in China, you know the place where Formula 1 and WEC goes to race, wants you to know that they’re brewing a new event for next year. They call it the SIC888, which is an 888 km endurance race that will happen on the 8th of October 2018.

Yes, the Chinese just love the number ‘8’ hence the race date and distance.

It hopes to attract the top GT and Touring Car teams from the region, as well as manufacturer-backed entries if they get really lucky. Eligible classes for the SIC888 are GT3, GTC, Sports Production (SP), TCR, and Touring Production 1 and 2.

Obviously the GT3 machines will be the quickest on track. And by our rough estimates, it should take a the top teams about 6 hours to run the entire race, plus safety car periods, pit stops, and incidents. That’s 163 laps around the 5.451 km circuit, where a GT3 can lap 2 mins 10 secs on average in the dry.

In comparison, the winning entry in the 2015 Philippine Endurance Challenge ‘only’ covered 737.26 km over a span of 8 hours.

“A lot of the leading motorsport venues in the world establish races which go on to become signature events whilst also serving as a showcase for the national sport. SIC, in conjunction with Nai Jiu and Motorsport Asia, decided they wanted to develop a product that would showcase Shanghai International Circuit the world over and make this one of the ‘must attend’ events on the international motorsport calendar – from there SIC888 was born,” said David Sonenscher, CEO of Motorsport Asia and SIC888 Event Director.

The SIC888 is being put together by promoter Nai Jiu, Motorsport Asia Limited, and the Yi-Hood Group. Their goal, aside from making the race a success, is to make the event an integral part of the annual motorsports calendar in China.

“It’s a China-based, Chinese organized event with key support from an international organization with the most extensive experience in Asian motorsport, but it’s very much an international race open to teams from all over the world,” Sonenscher explained.