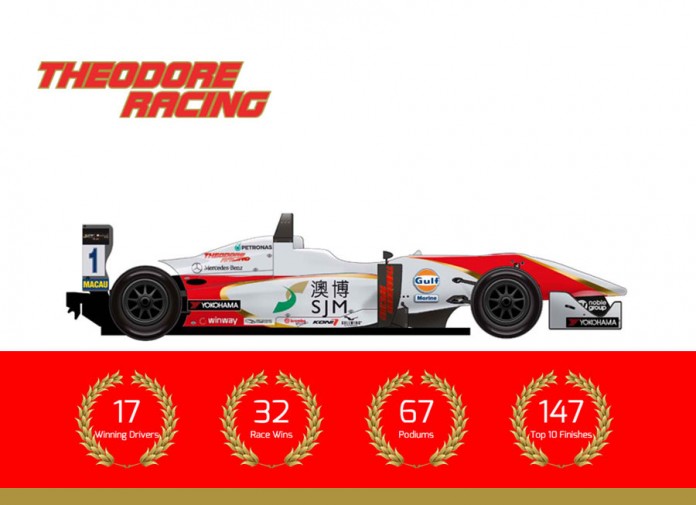 This November, SJM Theodore Racing is taking on the streets of the Macau Grand Prix in search of the team’s 8th victory in Formula 3. And they’re hoping to do so with a strong 3-driver line-up.

Theodore Racing has made their mark in Macau since its founder Teddy Yip first competed in 1956. They’ve since collected a total of 6 GP victories until 1992, which included a certain Mr. Ayrton Senna in 1983. The team, however, laid dormant for a good 2 decades ’til his son, Teddy Yip Jr., revived the squad in 2013.

Their return proved to be a successful one with Williams F1 development driver Alex Lynn scoring Theodore Racing’s 7th win. Though they failed to seal win no. 8 last year, they’re back in 2015 for another shot at the top step of the podium.

The trio will utilize Mercedes-Benz powered Dallara Formula 3 cars for the 2015 event. And whether they win or not, they’ll join Theodore Racing’s star-studded alumni list, 25 of which went on to become Formula 1 drivers. 4 of those went on to become future World Champions: Keke Rosberg, Alan Jones, Mika Hakkinen, and Ayrton Senna.

Of course, it’ll be preferable if they were to win.