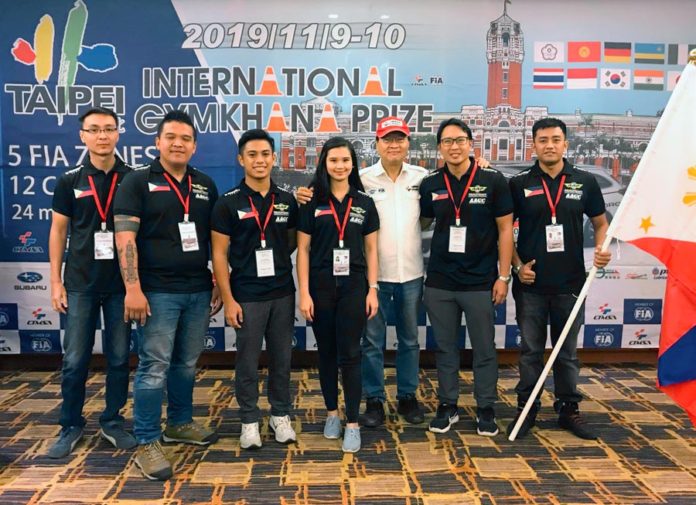 After their successful outings in Indonesia and Korea, the Automobile Association Philippines (AAP) is once again raising the banner of the Philippines as it heads to the Taipei International Gymkhana Prix (TIGP) this weekend. The event is set to coincide with the 3rd round of the Asia Auto Gymkhana Championship (AAGC) where the country sits 4th in the overall standings.

Mark Bernales from Cagayan De Oro, the surprise winner at the recent AAGC event in Korea last August, will once again team up with ’18 MSDP National Gymkhana Finals champion and newly-crowned ’19 Formula V1 Challenge champion Estefano Rivera. They will be joined by lady driver Gabie Desales who returns after her maiden AAGC outing in July.

The TIGP will feature the top 6 countries from Asia that consists of Indonesia, Thailand, India, Taiwan, South Korea, and the Philippines. But for this special auto gymkhana event, it will also include entries from Germany, Australia, Japan, Kyrgyzstan, and Nigeria that sums up to 39 drivers in total.

Drivers will compete in 3 categories: Individual, Doubles, and Team, under 2 events which are the TIGP and AAGC. They will then drive identically-prepared Subaru Levorg 1.6 GT-S supplied by the organizer.

“The decision to bring in new drivers, mainly from the AAP’s Motorsport Development Program, was seen as something bold and was not a popular decision. We never hesitated a bit as we knew what kind of drivers the AAP can produce and based on results, we showed that we can compete at an international standard. Our successes came sooner than expected and proved to be an eye opener to the ability of the program and its drivers, not to mention the impact it has made internationally with the FIA and locally for the grassroots drivers that aspire to go head-to-head with the best in Asia. We are looking forward to another consistent performance In Taiwan but the main job is a strong performance and to improve as a team,” commented Ivan Isada, Team Coach and Manager of AAP Philippine Team.

The trio has spent some time practicing in a similar-spec’d Subaru Levorg leading up to the event in Taiwan, with support from Motor Image Philippines. Hopefully this helps Team Philippines secure more wins and podium finishes this November 9/11.

Like the AAP Motorsports and Gabie Desales Racing page for the latest updates and results from the Asia Auto Gymkhana Championship in Taipei.