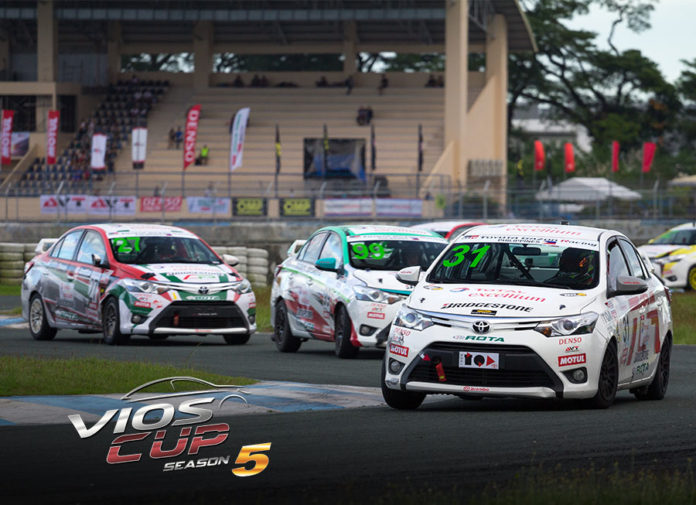 Luis Gono, Andres Calma, Allan Uy, and Daniel Miranda. These are the names of past Vios Cup champions. And come 2018, another one will be added onto the list as Toyota Motor Philippines (TMP) kicks off season #5 with a new schedule, driver list, and set of rule changes.

The current 3rd gen-based Vios Cup Car will see yet another year of action. However, several new modifications are now allowed for Super Sporting Class runners. The optional parts list include a fiber-reinforced hood and trunk plus TRD Rotor Discs. This shaves a few kg from the overall weight and more importantly, are said to be worth around 2 secs quicker per lap.

Down from 4 events last year, the current Vios Cup Calendar ‘only’ has 3 stops for 2018. There will be 2 held at the Clark International Speedway (CIS) in April and September, while the other will revisit the Filinvest Street Circuit in Alabang at the end of July. But to make up for the lost weekend, rounds in CIS are to have 3 races each instead of just 2.

As for the drivers, the provisional entry list contains 51 names spread over 4 categories. Some of these familiar faces have graduated into higher classes. Aira Medrano, Tonton Ramos, Mark Sy, Paulo Agregado, and Sean Velasco moves up to the Super Sporting Class, while Gel Napat, Marc Soong, and Red Diwa are now part of the Bridgestone Sporting Class grid. There are also a number of rookies set to make their Vios Cup debut in 2018. Dimple Napat, Miguel Cezar, and Maila Alivia will join the ROTA Promotional Class, whereas karting champion John Dizon will give the Sporting Class drivers a run for their money.

It’s good to see Gretchen Ho, Fabio Ide, Troy Montero, and Aubrey Miles return for another season in the Celebrity Class. The other stars taking up spots on the grid will be Chie Filomeno, Sofia Andres, Diego Loyzaga, and Sam Milby.

The 2018 Vios Cup is in partnership with Bridgestone and ROTA, supported by Motul, Brembo, AVT, 3M, Denso, OMP, and Tuason Racing.