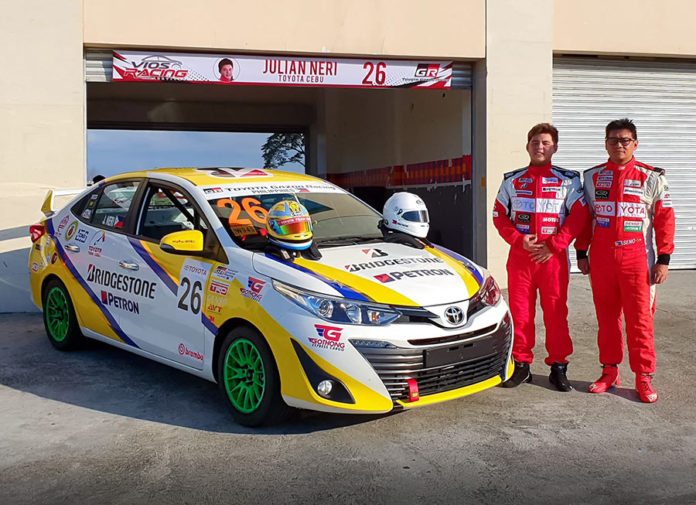 The reigning team champion in Toyota Motor Philippines’ (TMP) one-make-series is back to defend their title in the newly-renamed ‘Vios Circuit Championship’. This time though, Toyota Team Cebu (TTC) has trimmed down its entry from the 7 cars they ran last year to a leaner, younger 3-car squad for the 2019 season.

TTC’s garage will feature a mix of new and familiar faces when the championship gets underway this June 7/9 at the Clark International Speedway (CIS).

Lord Seno and Clive ‘Dr. Speed’ Fermin have signed up for another year to chase after race wins in the Sporting Class. As team captain, Seno lead TTC’s title hunt in ’18 and nearly won the class championship. After missing out by a mere 5.5 points, he’ll be giving the overall crown another go this year driving the new gen. 2 Vios One Make Race (OMR) Car.

Fermin, on the other hand, is looking forward to make his Sporting Class debut after winning the Promotional Class in ’18. The doctor however won’t see track action until the second event in August as he’s forced to sit out the curtain raiser this weekend due to scheduling conflicts.

The newest and youngest addition to TTC’s lineup is Julian Neri who happens to be the team’s lone entry in the Promotional Class. Though new to the series, the 18-year-old already has a long list of achievements in his short motorsport career. Like his father and veteran karter Justin Neri, he got his start in go karts before moving into cars. In 2018 alone, he earned a slot in MSDP National Gymkhana Finals last year and finished in the Top 8, raced in the 8 Oras ng Pilipinas, and became the very first champion of the First Step Racing Cup (FSRC).

Toyota Team Cebu will be part of the combined 22-car grid at the Vios Circuit Championship’s first event this weekend. Qualifying will take place on Friday (June 7) followed by Race 1 at 3:00 PM. Race 2 and Race 3 is scheduled on Saturday (June 8) at 11:30 AM and 3:20 PM, respectively.

Lord Seno, Team Captain: “Big changes in Toyota Team Cebu this year as we’re only 2 cars for the season opener. This should be fairly easy to manage as we make sure that both Julian and I perform with the all-new Vios OMR car. Although I miss the old team where we had 7 drivers, I hope that we’ll be up par with last year’s results. It’s up to our Manager John Velasco and Principal Manjo Cuenco to let this team grow.”