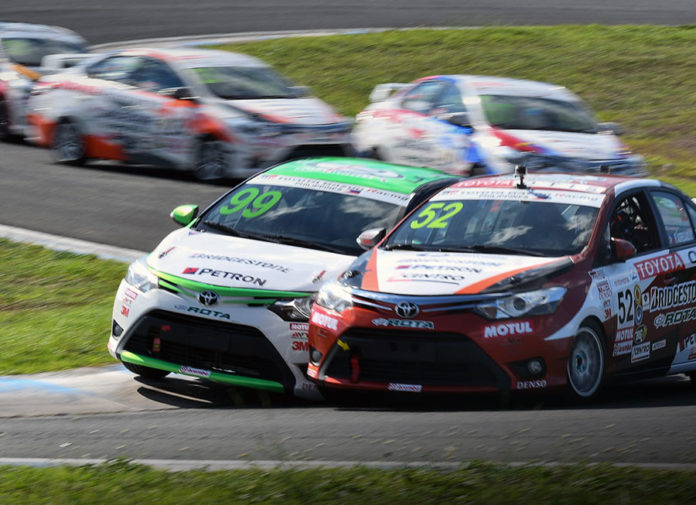 It’s hard to believe that after only one race weekend last April, we’re now already 1/3 of the way through the Vios Cup’s 2018 championship. That’s because the calendar is now down to just 3 events. But that doesn’t mean there’s less “waku-doki” action as the number of races remain at 8 in total, multiplied by 3 racing categories that sums it up to 24 races this year.

Before Toyota Motor Philippines (TMP) heads to the next event at the Filinvest Street Circuit in Alabang on July 28/29, here’s how the driver standings stack up so far after Round 1.

Gerard Loy of Team Biskeg currently leads the Super Sporting Class thanks to his win and 4th place finishes at the Clark International Speedway (CIS). The driver of the #99 car holds a 8 point advantage over Keith Bryan Haw of Obengers and Allan Uy of Manila Proof Racing.

As for the Bridgestone Sporting Class, only 4 points separate Red Diwa of Toyota Isabela and Lord Seno of Team Cebu, which will make for an interesting title fight in Alabang.

Vincent Courcol of AP Corse / Toyota Makati enjoys a 10 point advantage in the ROTA Promotional Class, but he’s not out of the woods yet. Nissan GT Academy finalist and lady driver Elysse Menorca of Obengers made an impressive Vios Cup debut last April and looks to be a strong contender for the championship.

The boys head the pack in the ROTA Celebrity Class with Fabrio Ide, Troy Montero, and Sam Milby taking the top 3 spots in the standings.

The 2018 Toyota Vios Cup is in partnership with Bridgestone and ROTA, supported by Petron, Motul, Brembo, AVT, 3M, Denso, OMP, and Tuason Racing.