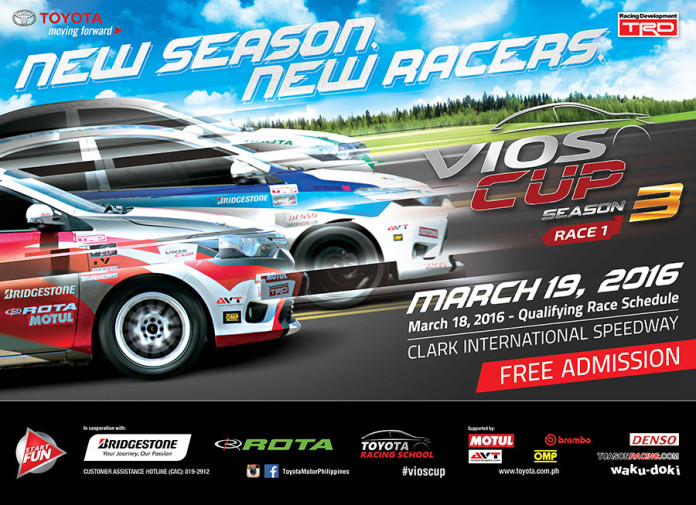 With only a few weeks to go ’til the 2016 season begins, the Vios Cup finally gets the green light. And as expected from the “biggest motorsports event in the country,” this year is only going to get bigger.

The tools may not have changed, with the Vios Cup Car still the weapon of choice, but a lot of other things has. The biggest of which is the revised classes. It’s no longer based on qualifying times, which means driver classification remains constant throughout the season, and has since been increased from 2 to 3.

There’s now a new ‘Super Sporting Class’ that’s added on top of the Sporting and Promotional Classes. As the name suggests, it’s reserved for the Top 20 drivers from 2015 where they’re all required to have a National B License to compete. This way, the best-of-the-best can go at each other on track, hopefully showing the other boys (and girls) how clean racing should be.

Meanwhile, the Top 10 finishers in last year’s Promotional Class has been bumped up to the Sporting Class, including celebrity drivers Sam YG and Phoemela Baranda. As always, the Promotional Class is where all the newbies, oldies, ladies, and other celebrities go.

Although technically there were 63 drivers in 2015, they didn’t all share the same track at any given time. That’s why the 55 names slated for Round 1 is by far the biggest in Toyota Motor Philippines’ (TMP) history. The list includes familiar faces such as defending champions Andres Calma and Miguel Diaz, as well as the pretty faces of Derek Ramsay, Joyce Pring, Fabio Ide, and Jinno Rufino. But sadly, 2014 champion Luis Gono will not be part of the grid this year… or at least, not yet.

There are also new celebrity drivers that you may have heard of. Jericho Rosales is scheduled to make his race debut this weekend, while Miss World 2013 Megan Young and actress/singer Arci Munoz will follow suit in later rounds.

Here is the complete entry list for the 2016 Vios Cup.

The 2016 Vios Cup is in partnership with Bridgestone and Rota, supported by Motul, TRD, Brembo, Denso, AVT, OMP, and Tuason Racing.