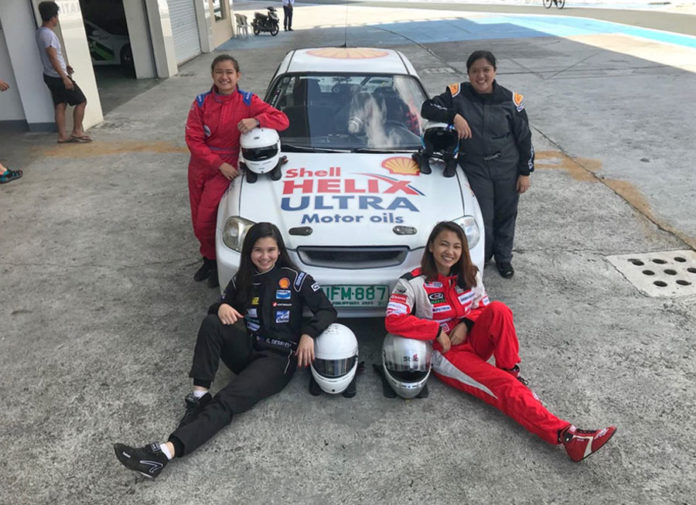 Motorsport may be a male-dominated sport, but there are now more and more women who are making their mark in racing. That includes the Philippines where local lady drivers are excelling in various disciplines such as circuit racing, drifting, and slalom. As a matter of fact, a group of 4 drivers are entering the 8 Oras ng Pilipinas this December 1/2 to become the very first all-female team to take on the Philippine Endurance Challenge (PEC).

Composed of Aira Medrano, Dimple Napat, Gabie Desales, and Kathy Villar, they will be sharing driving duties racing the #11 Honda Civic EK of Team Shell Helix Ultra in both the FM-2 and FM-3 classes. This will be their very first PEC outing together and are driven to reach the finish line on the podium.

Aira brings with her a combined 9 years of experience in karting and touring cars. She received the Golden Wheel Award in ’09 for bagging the Cadet BabyRok Class Overall Champion and again in ’10 for being MiniRok Class 1st Runner Up. In 2016 Aira joined the Toyota Vios Cup where she made her way up from the Promotional, Sporting, to the top-tier Super Sporting Classes.

Much like Aira, Dimple was also part of the Vios Cup grid in ’17 and ’18 with Team Biskeg. Her best result to date were back-to-back wins during the season finale last September, which allowed her to finish 3rd overall in the Promotional Class.

Gabie, on the other hand, began her motorsports career in slalom 2 years ago before switching to circuit racing in ’18. She finished 3rd in class during the 4 Oras ng Pilipinas last June and was recently crowned as bracket G champion in the FlatOut Race Series (FORS).

Lastly, Kathy Villar is a seasoned drifter and touring car driver. She became the very first female Philippine GT Championship rookie of the year by winning the GT150 title in ’18.

Each member of the team have unique strengths to contribute towards the team’s success. Aira has her passion and dedication to the sport because of her belief that you have to do what you love and love what you do in order to succeed. Dimple’s faith draws from the support of her loved ones in helping her achieve her goal. Gabie constantly drives for improvement, challenging herself to go outside her comfort zone being in her first year in circuit racing. Then, Kathy brings with her perseverance and hard work in training to increase her seat time. Above all those, the all-female squad of the #11 Team Shell Helix Ultra is putting their faith in God for guidance.

Gabie Desales, Team Captain: “As the only all-women team in the 8 Oras ng Pilipinas, we are not only aiming to win but also to encourage more women to participate in motorsports. It’s a discipline where both genders are equally encouraged to excel and we want to show that it’s possible with our passion for racing, perseverance, and overall team effort.”