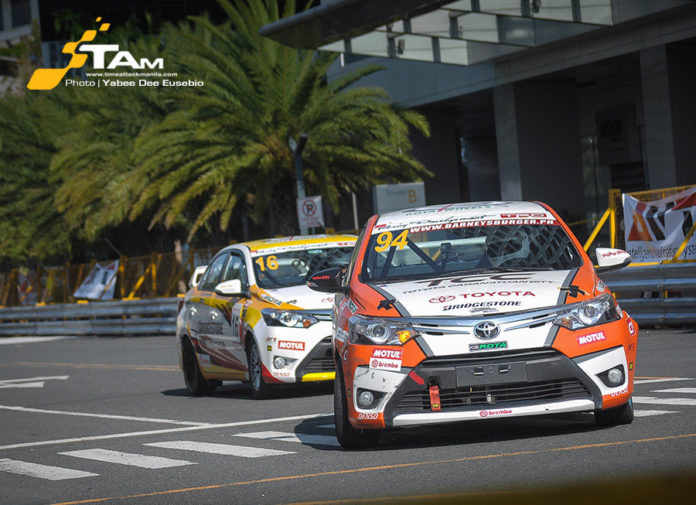 It was a weekend full of highs and lows as Toyota San Fernando – Toyota Cabanatuan City (TSF-TCC) took on the Manila Bay Street Circuit for the 3rd round of the 2015 Vios Cup. But despite the challenges, the team managed a podium finish with Ali Salvador. 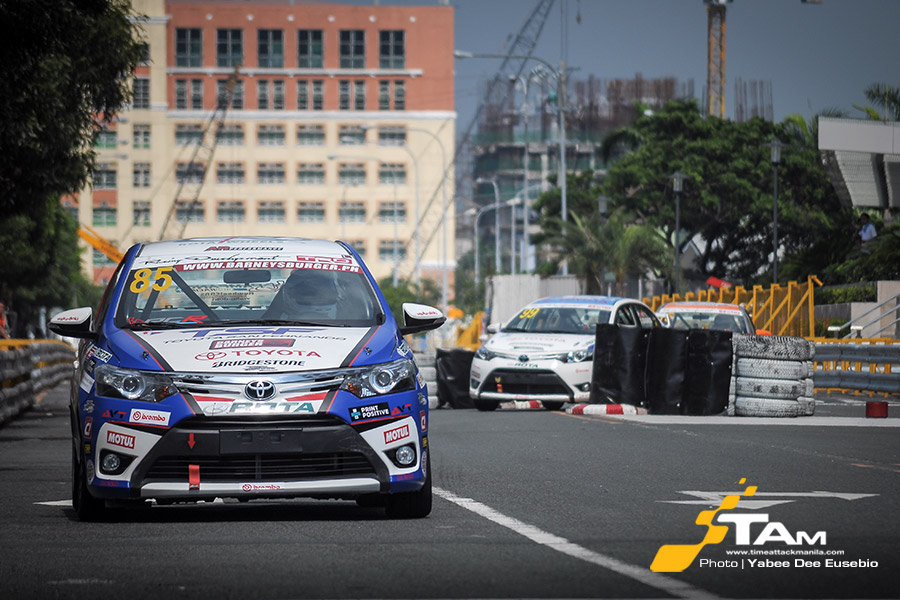 Sporting Class
In Race 5 Dumlao, who started in 4th despite a 30 kg handicap, dropped several places after he got bottled behind a slow starting Allan Uy. Ramos also lost ground on the first lap when several cars piled up heading into the chicane. Still, he was happy to escape the chaos unscathed. The savvy veteran Steve Bicknell though was able to gain several positions in all the chaos.

At the end of 14 laps, Dumlao crossed the line 15.358 sec behind the leaders in a respectable 6th place due to a 1 position penalty. Ramos finished in 10th and Bicknell in 16th. 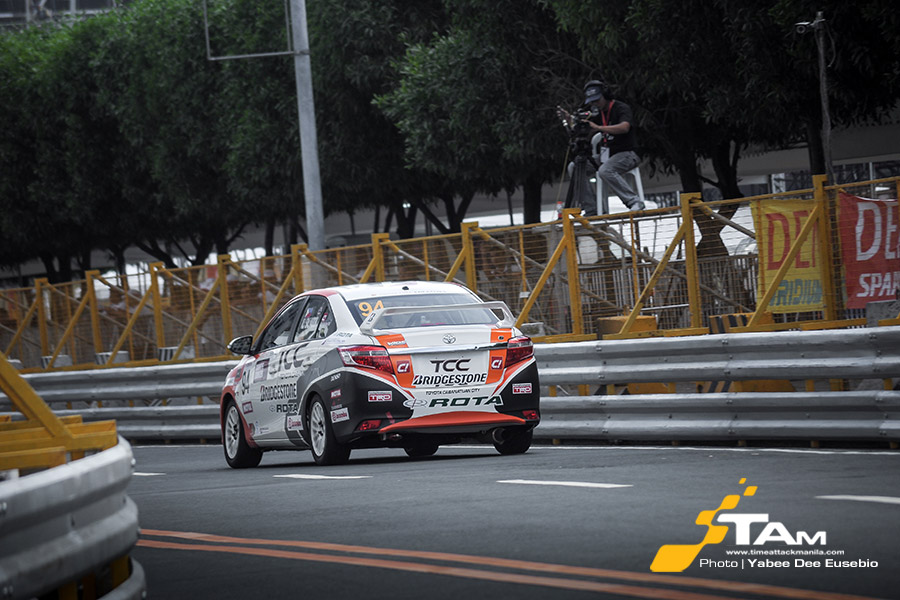 Qualifying in 3rd spot, the afternoon race saw Dumlao collide with the young Daniel Miranda on the very first lap. But he was able to continue until his No. 28 Vios began to overheat, forcing him to end his race on lap 4. Ramos, on the other hand, started from 8th and successfully defended his position from a hard charging Carlos Loinas until the chequered flag came out.

As for Bicknell, not only was he was able to climb all the way to finish in 13th place after starting from 18th, but also posted the fastest lap of the race at 1:01.598. 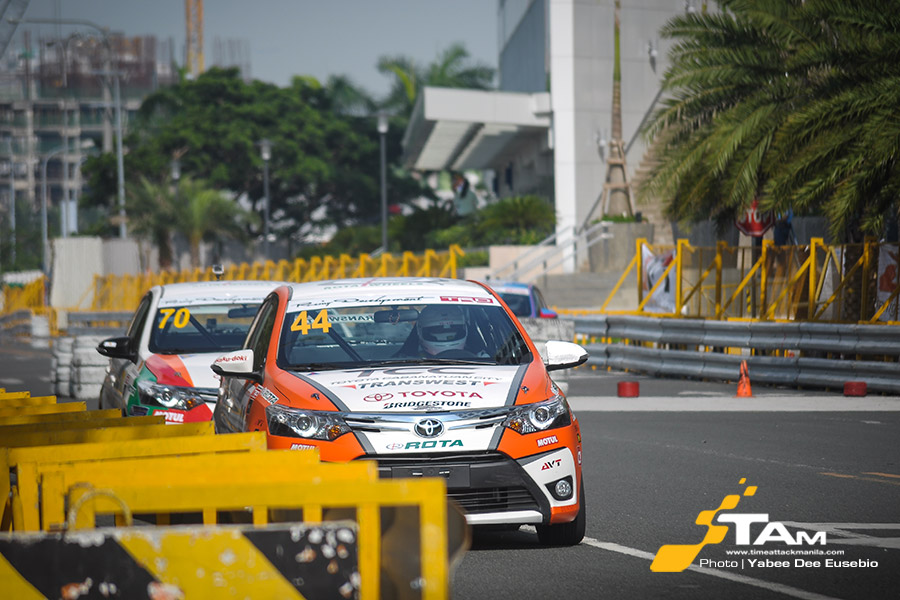 Promotional Class
Race 5 was surprisingly clean compared to the destruction derby that happened in the Sporting Class. Well, at least until the later stages of the race.

An impressive run by Cebu’s big winner Paolo Rodriguez landed him 3rd place despite starting down in 10th. Unfortunately, he was later handed a 1-position penalty due to a collision in the chicane. He also set the fastest lap with a blistering 44.101 sec run. Dysico also had a good race for TSF-TCC jumping 2 places to finish in 12th.

In the opening stages, Ali Salvador was defending 3rd from Miguel Diaz and Lord Seno. But he would later suffer a tire puncture after bumping the chicane, causing his last place finish and earning him a 10 sec penalty.

“I still call it a sweet victory because my main goal was to finish the race,” remarked Salvador about the incident. 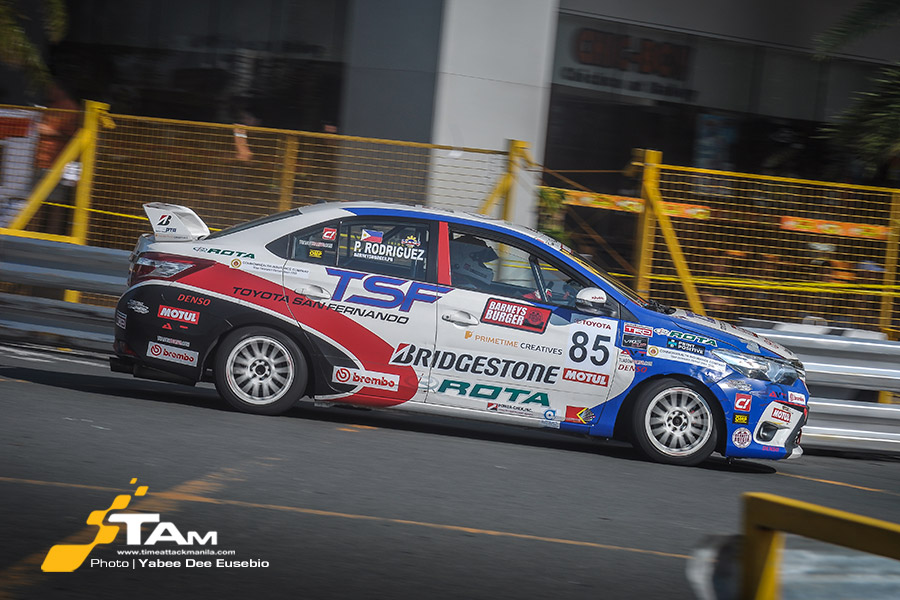 Unfortunately for the boys of Toyota Cabanatuan City (TCC), it was all downhill from there. Sta. Romana experienced trouble and finished 15th place. Palilio, who felt under-the-weather, didn’t finish the race and was unable to make it to the grid for Race 6.

In Race 6 though, things turned around for Salvador who was again locked in a close battle for the top spot with Diaz. Although he only managed 2nd place, the team was very happy with his feat. Also making it into the points was Rodriguez who started 10th and ended up 5th, while Sta. Romana finished the race in 14th.

Rodriguez commented: “I felt disappointed in my performance during qualifying after seeing my teammates doing good. But I really enjoyed being the underdog this time around, chasing the faster cars.”

Unfortunately for Dysico, he only completed 8 laps and retired due to mechanical problems. 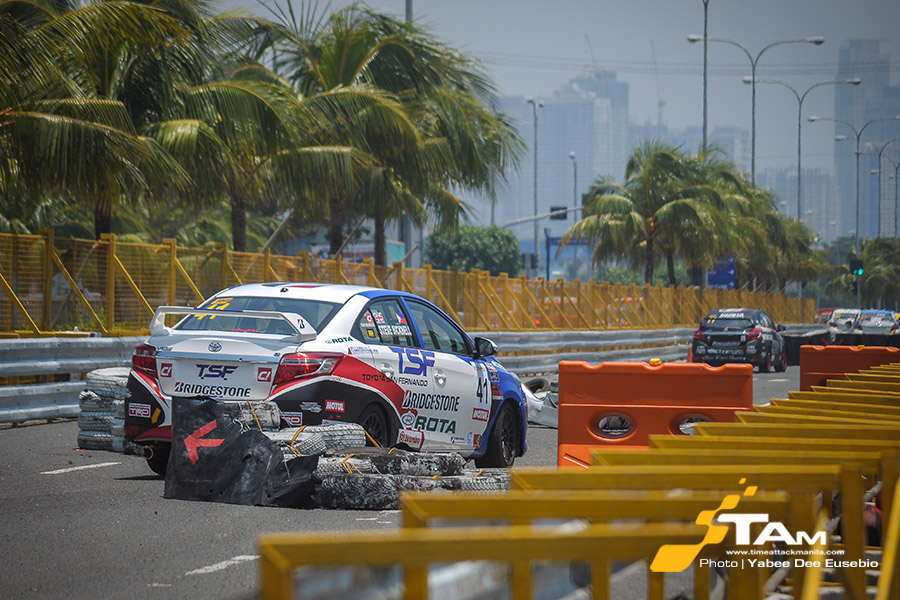 Despite the mishaps during 3rd round of the 2015 Vios Cup, Team TSF-TCC was very pleased with the podium finish of Salvador and the fastest laps set by Bicknell and Rodriguez. 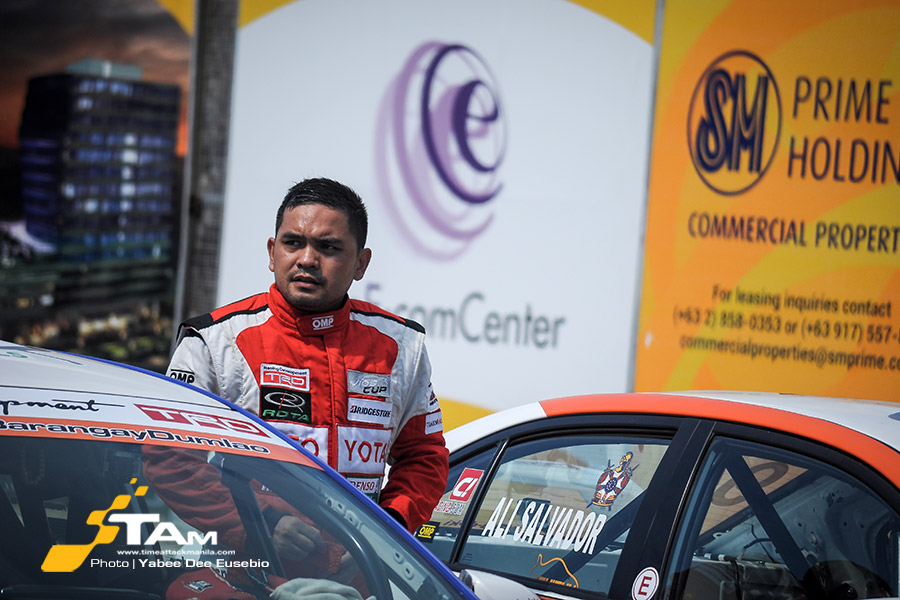 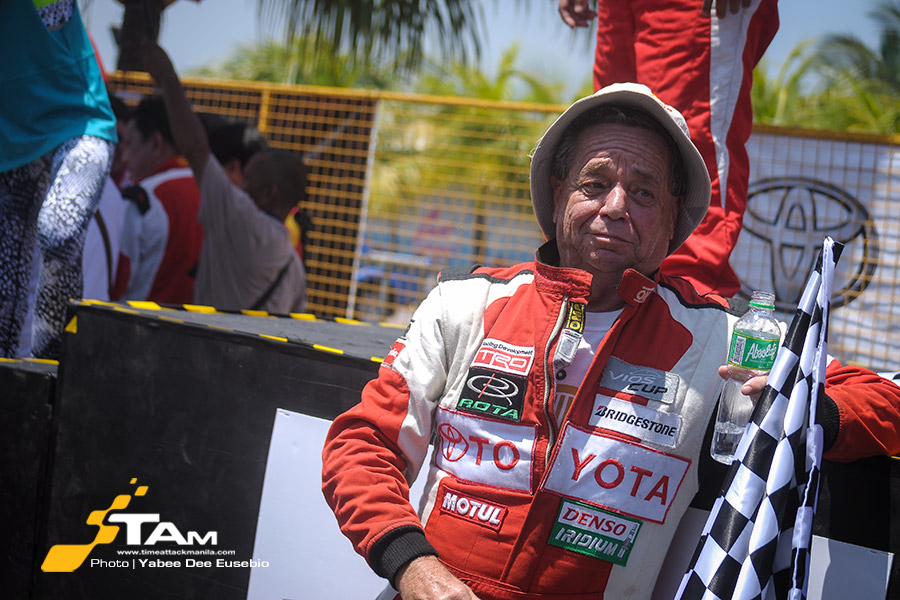 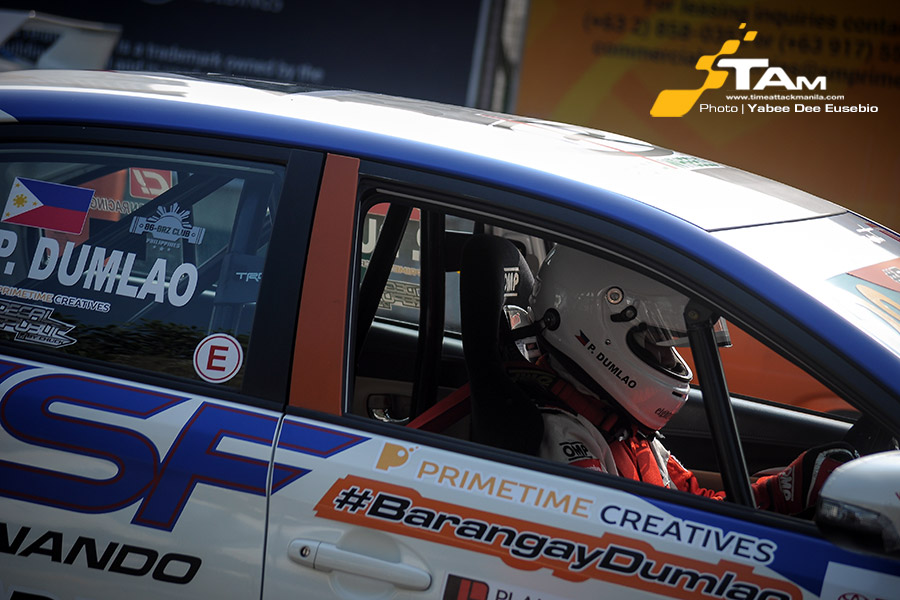 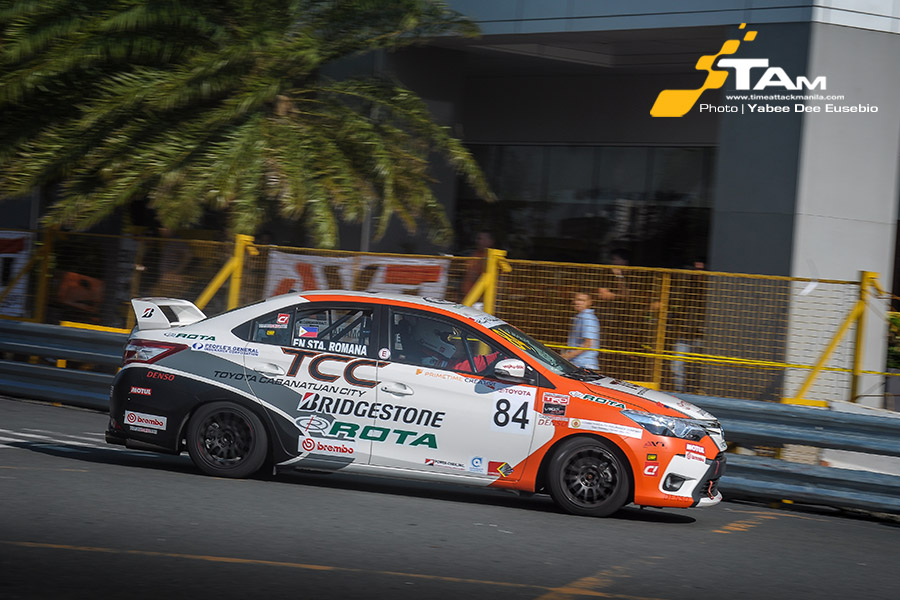 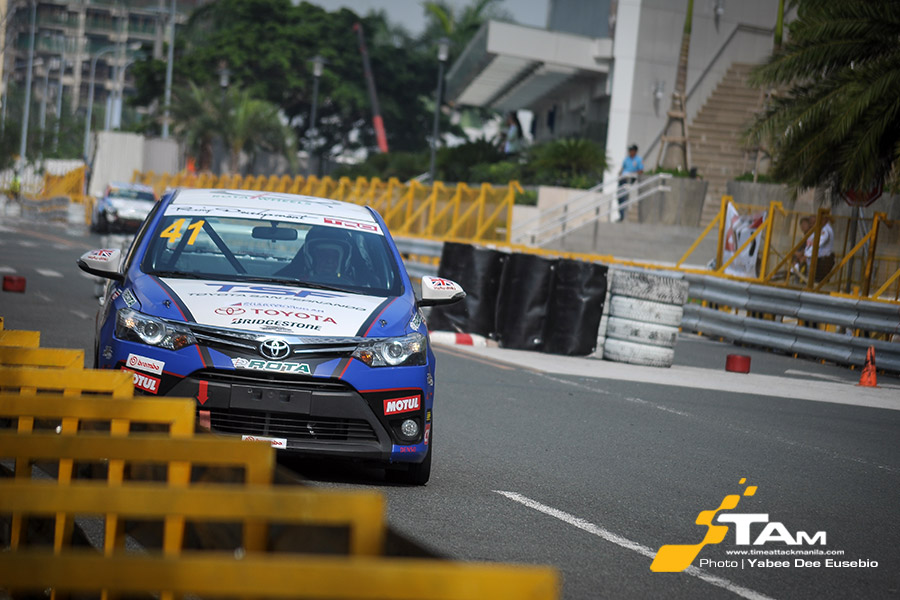 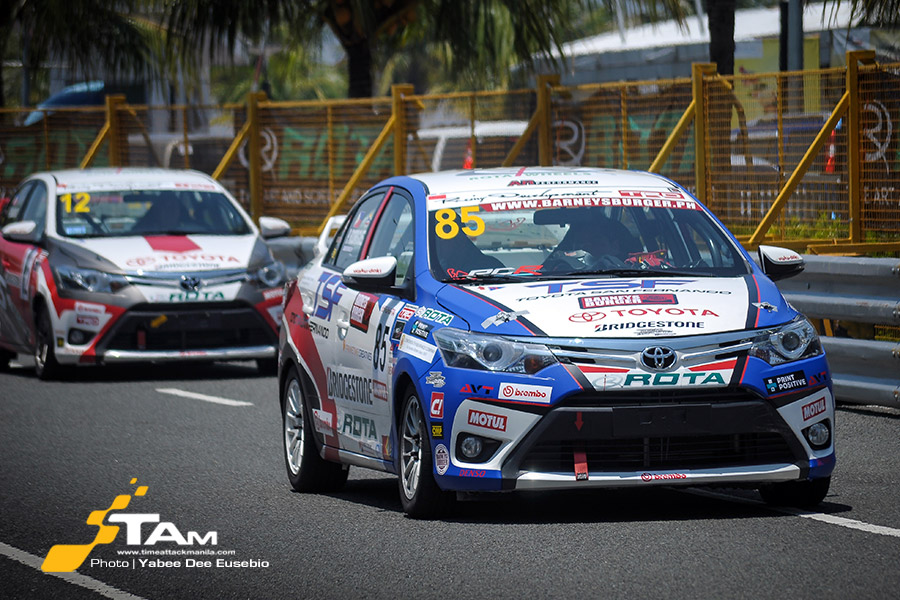